Alcohol consumption occurs frequently in social situations. For many, it can ease stress and increase pleasure. Recognizing why people drink alongside their peers and the consequences of getting carried away could help you understand more about social drinking.

Drinking is a common social activity. People meet with friends or co-workers over drinks at the end of a workday to decompress. Most of us attend events that offer alcohol. It is an activity shared by everyone from college students to business executives.

Around the world, millions of people engage in this activity for various reasons. However, unregulated or irresponsible social drinking could spur problems that could last a lifetime.

Social drinking is casual alcohol consumption in a social setting, such as a bar or restaurant. It commonly occurs on special occasions, such as birthdays, Cinco de Mayo or New Year’s Eve.

Many people tend to feel relaxed when drinking socially. This is because alcohol affects brain function, changing moods and behaviors. It binds to receptors in the brain that boost dopamine levels, which activate pleasure.

Social drinking is part of American culture. However, engaging in the activity multiple times a week could give way to heavy drinking, defined as four or more alcoholic beverages a day for men and three for women on five or more days in a month.

Heavy drinking could cause people to engage in activities that jeopardize their safety.

AM I AN ALCOHOLIC?

Take our 11-question quiz to find out now.

For thousands of years, alcohol and socializing have gone hand in hand. The activity is featured in religious texts, Roman literature and historic artworks.

In ancient Greece, Socrates would offer wine to philosophers during gatherings. In the 16th century, Mexicans would drink pulque, a fermented drink, in vinaterías. In Colonial America, early settlers would fill taverns and share news with one another.

Alcohol was an infamous part of Woodstock in 1969 and has been such at countless outdoor concerts since.

Since then, social drinking has remained popular. During Oktoberfest, crowds engage in beer drinking and celebrations. Alcohol was an infamous part of Woodstock in 1969 and has been such at countless outdoor concerts since. It also is common at sporting events.

Christine Sismondo, author of “America Walks into a Bar: A Spirited History of Taverns and Saloons, Speakeasies and Grog Shops,” says alcohol changes the way people relate to one another. “You end up with accelerated relationships — and occasionally cantankerous ones,” she told Smithsonian magazine in 2011.

In today’s digital age, social media and alcohol have become closely intertwined. Alcohol-related ads and marketing encourage social drinking, as do people who post photos and videos about their drinking activities on sites such as Facebook, Instagram and Snapchat.

The purpose of many drinking events, such as happy hours, is to foster social bonding. A number of venues beyond bars or pubs foster social drinking.

Alcohol often plays an important role at weddings. Loved ones may raise a glass of wine or champagne to toast the bride and groom. During the reception, guests flock to the bar and socialize for hours.

Today, couples are enhancing the social experience. Since 2009, the cost of entertaining guests has more than tripled, as more is being spent on wine, liquor and cocktails.

Festivals provide an opportunity to hear live music, eat food and socialize over alcohol. Some of the most popular alcohol-filled festivals in the country include the Firefly Music Festival, Lollapalooza, South by Southwest and Coachella.

Social motives influence most festivalgoers to drink. A study by MSN UK revealed that 47 percent of festivalgoers engage in activities they would “never consider doing outside of the music festival environment,” which include excessive alcohol consumption.

Alcohol is prevalent before and during professional sporting events. Tailgating allows fans to grill food, drink alcohol and socialize in the parking lot in preparation for a game. Concession stands often offer alcohol throughout an event.

Researchers at the University of Minnesota found 40 percent of spectators at 16 sporting events drank alcohol. Those who reported tailgating were 14 times more likely to be legally drunk. In all, thousands left their event legally intoxicated.

Many employers host functions that include alcohol, such as business luncheons, holiday parties or happy hours held at a restaurant. The purpose of these gatherings is to establish relationships and strengthen camaraderie among employees.

A 2015 survey by the Society for Human Resource Management indicated 65 percent of HR managers held an end-of-year holiday party. Three-fifths of those gatherings offered alcohol. More than half did not regulate alcohol consumption.

Alcohol is prevalent on college campuses. As a result, social drinking could give way to heavier consumption in a short period of time.

Fraternities and sororities host parties attended by many. These gatherings may include kegs and countless bottles of liquor, which make binge drinking easier. As a result, nearly 75 percent of students living in a fraternity house binge-drink, per a Harvard School of Public Health College Alcohol Study.

In 2014, nearly 88 percent of people 18 and older reported drinking alcohol at some point in their lives, per the National Institute on Alcohol Abuse and Alcoholism. The wide availability of alcohol has contributed to its use during many special occasions.

Other junctures that feature social drinking include:

Why People Drink in Social Situations

People drink socially for a variety of reasons. Alcohol helps some people take the edge off in social situations. Others just want to fit in.

Tash used alcohol to fit in with her new friends. When it didn’t work, she turned to therapy to quit drinking and cope with depression and anxiety.

And many rely on alcohol to enhance their communication skills at social functions.

Alcohol’s Role as a Social Lubricant

Individuals often turn to alcohol before an evening out with friends. For many, it is perceived to be a social lubricant that improves mood, reduces self-consciousness and enhances social skills.

A study published in Psychological Science supports this theory. Researchers noted that alcohol increased social bonding among strangers randomly assigned to groups of three. The alcohol drinkers were more engaged than those drinking nonalcoholic beverages in discussions. The social drinkers were also more likely to involve everyone in these conversations. 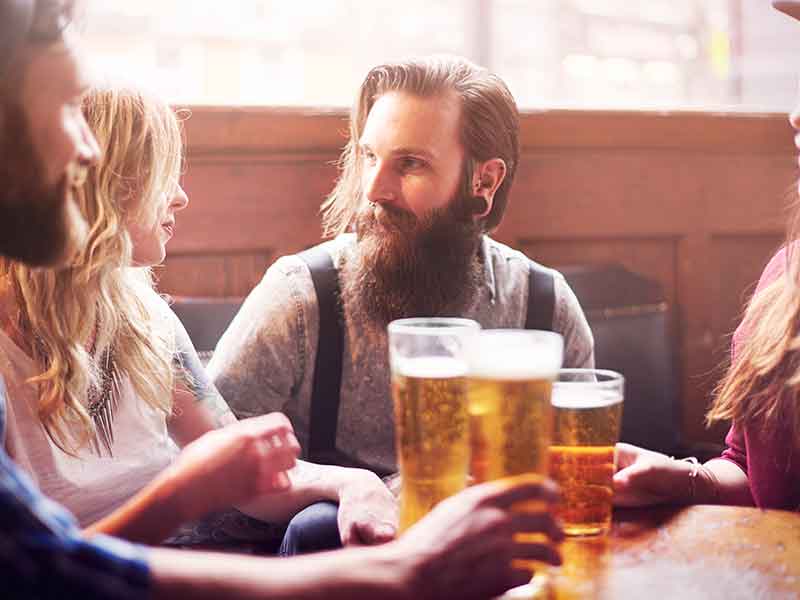 Social anxiety disorder is a mental health condition in which individuals experience heightened stress in social situations. They may fear doing or saying something embarrassing in front of strangers, friends or a group of people. In response, they turn to alcohol.

The tension reduction theory, which states that individuals with social anxiety consume alcohol at social functions to reduce stress, may explain why. Many are motivated by the idea that alcohol reduces anxiety. If alcohol alleviates anxiety once, the likelihood of continued social drinking increases.

Some researchers say alcohol increases stress, but studies have provided inconsistent results. Investigations often use college students with varying levels of social anxiety to examine the theory, rather than patients with social anxiety disorder.

Anxiety-induced alcohol consumption can give way to alcohol dependence. About 20 percent of patients with a social anxiety disorder also have an alcohol use disorder. For these individuals, alcohol and social situations could be problematic.

Social Drinking: What Can Go Wrong?

Social drinking can be a low-risk activity done in secure environments. However, people tend to drink more in social situations, which can harm the drinker and his or her peers.

According to the alcohol myopia theory, alcohol consumption narrows perception and causes individuals to pay closer attention to a few internal or external factors. Consequentially, people may focus on pleasures rather than consequences. Alcohol impairs our ability to identify dangerous situations. For example, an inebriated person may concentrate on a friendly smile rather than the risk of driving home with a stranger. The theory suggests that people make illogical, simple decisions in complex situations.

Alcohol can manipulate the way we think. Therefore, consuming the substance in social settings can give way to miscommunication.

A 2010 study published in the Journal of Abnormal Psychology revealed that men who consumed moderate amounts of alcohol perceived friendly photos of women as sexual. They misinterpreted facial expressions and body language.

This is common in bars across America. Alcohol disrupts our ability to interpret the motives of others, leading to social mistakes or even violence.

Potential to Drink Past Capacity

Drinking more than you can handle is common in social situations. Someone may try to catch up to a peer who is on a third drink or may stay out later than usual. This can give way to embarrassing and dangerous situations. 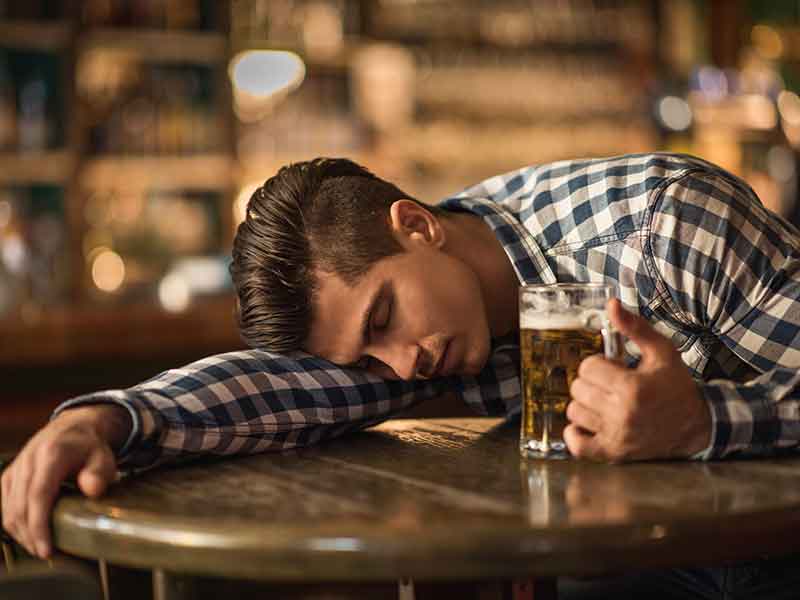 Careless social drinking could cause individuals to drink and drive, commit violence, have unprotected sex or black out. Alcohol poisoning, another potential consequence, could lead to death.

To avoid problems, social drinkers must know their limits.

Columbia University laid out strategies to control your drinking in social situations:

These strategies could prevent drinkers from breaking the law or engaging in risky behaviors. It could also ensure they arrive home safely.

Drinking regularly, socially or not, can cause alcohol addiction. Regular consumption of alcohol at social functions could increase your tolerance and desire to drink more.

“We only use alcohol because, as humans, we develop the understanding that we like the way things feel. But if we do not take very good care of that responsibility, it can take over our lives.”

Nearly 17 million Americans, including nearly 680,000 adolescents, struggle with an alcohol use disorder. Some of these individuals have co-occurring disorders. In some instances, alcohol serves as a gateway drug to other dangerous substances, including heroin and cocaine.

For Those in Recovery from Alcoholism

Though social drinking can be a low-risk activity, it can also be dangerous. Activities and environments that revolve around alcohol could lead individuals to drink in excess and engage in risky behaviors.

Individuals in recovery must be especially careful. If you attend an event where alcohol is served, do not be afraid to say no and don’t give in to peer pressure. Try to bring a friend who understands your commitment to sobriety.

Remember: One drink could cause alcohol relapse. Individuals are most vulnerable to relapse during the early months of sobriety. Attending events that do not include alcohol is encouraged.

Excessive alcohol use is the fourth-leading preventable cause of death in the United States. Do not become a statistic. If social drinking has led you or someone you know to abuse alcohol, contact a nearby treatment center.