Firefighters face a demanding work environment. Long work hours, lack of sleep and risky exposure to fires create considerable stress. Some resort to drinking alcohol to cope. This behavior may develop into an alcohol use disorder and interfere with job performance.
AddictionFirefighters
Topics on this Page
Topics On this page
Author: Sonia Tagliareni | Last Updated: 2/26/20 | 10 sources

Despite the lack of substantial research about substance use trends among firefighters, a 2012 study published in Occupational Medicine revealed that 56 percent of career firefighters were past-month binge drinkers. In fact, alcohol is the most common substance of abuse among firefighters, according to the Fire Service Joint Labor Management Wellness-Fitness Initiative, a collaboration between the International Association of Firefighters and the International Association of Fire Chiefs.

Recognizing patterns of alcohol use among firefighters is important because of the risks associated with the job. Firefighters must be at an optimal level of performance to ensure their safety and the safety of people they are rescuing.

A 2012 study published in Occupational Medicine revealed that 56 percent of career firefighters were past-month binge drinkers.

Excessive alcohol use claims 88,000 American lives every year, per the Centers for Disease Control and Prevention.

Studies suggest a similar incidence of binge drinking and heavy alcohol consumption among firefighters and military personnel, and both professions have rates higher than the general population.

A survey by the International Association of Fire Chiefs revealed that 66 percent of participants reported seeing firefighters from their departments coming to work with a hangover, while 37 percent disclosed that they knew firefighters who skipped work because of alcohol use. However, only 2 percent noticed severe alcohol-related impairment among their department members.

In 2014, the Center for Fire Rescue and EMS Health Research conducted a survey designed to identify the rate at which firefighters consume alcohol. The study, published in the Journal of Substance Abuse and Alcoholism, compared this rate to that of the general population.

85% of career and 71% of volunteer firefighters reported past-month drinking. 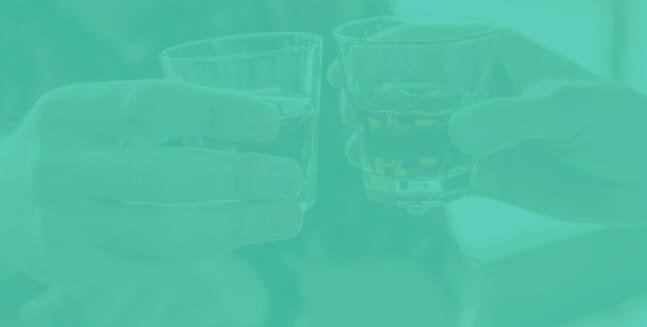 In the study, a career firefighter said drinking is common in the profession.

The past-month drinking rates among firefighters in the study are higher than that of the general population. In 2014, nearly 57 percent of adults reported past-month drinking, according to the National Institute on Alcohol Abuse and Alcoholism.

Why Do Firefighters Turn to Substances?

Firefighters deal with irregular work hours, stress and exposure to hazards such as blazing fires and thick smoke. They struggle with poor mental and physical health, sleep deprivation and depression. To cope with these issues, some firefighters turn to alcohol.

Firefighters typically work 24-hour shifts for 10 days a month. This irregular work schedule leaves them with a lot of free time.

Career firefighters believe that their shifts contribute to their heavy alcohol consumption. In fact, the study published in Occupational Medicine revealed that career firefighters consumed alcohol during half of their off-duty days.

In an interview for a 2014 study published in the Journal of Substance Abuse and Alcoholism, a career firefighter admitted that having an odd schedule was an excuse for him to drink alcohol. He knew when he did not have to go to work the next morning. To other firefighters, drinking became a filler activity.

The lack of a consistent work schedule gives firefighters more time to indulge in alcohol-related activities.

Jeff Orrange, lieutenant and coordinator of the peer support team at Orlando Fire Department, said this irregular work schedule may contribute to increased alcohol use.

“Our sleep patterns are off,” Orrange told DrugRehab.com. “There are times you may rely on alcohol to get into normal sleep modes on days off.”

Many people use alcohol as a means to socialize, and firefighters are no different. Firefighting encourages an atmosphere of camaraderie, and off-duty drinking is a way to bond with co-workers after long hours at work.

A firefighter quoted in the Journal of Substance Abuse and Alcoholism study revealed that it was common for firefighters to grab drinks after their shifts and tell stories about their days. He also said they acted the same way they would at the station, except they all had an alcoholic beverage.Another firefighter said the career is traditionally macho and male-oriented, an environment that goes hand-in-hand with alcohol.

A 2014 study published in the Journal of Substance Abuse and Alcoholism found that 19 percent of firefighters who responded to the Oklahoma City bombing used alcohol as a coping strategy.

Source: 2014 study published in the Journal of Substance Abuse and Alcoholism

A Forbes article ranks firefighting as the second most stressful job in 2016.

Because of the nature of their work, career firefighters may struggle with anxiety and post-traumatic stress disorder. A 2011 study published in the Journal of Occupational and Environmental Medicine found that the rates of PTSD and depression among firefighters were higher than those among the general population.

Orrange called firefighting a stressful profession. Firefighters must be ready for anything to happen at a moment’s notice. They could be asleep in the middle of the night and wake up to save a burning building or tend to an infant in cardiac arrest.

“We have to recall training at a moment’s notice with little to no rest,” Orrange said.

The Center for Fire Rescue and EMS Health Research study found that 19 percent of firefighters who responded to the Oklahoma City bombing used alcohol as a coping strategy. Drinking was the second most common way to cope, with 50 percent of firefighters seeking support from friends and family. Many firefighters resort to alcohol to unwind from their tedious workdays. One firefighter said in a survey response that the ease of access to alcohol made it a great means of self-medicating. He explained that once individuals saw alcohol as a quick fix, they would be more likely to turn to alcohol following their problems.

Are you a firefighter struggling with addiction?Get a recovery plan that’s made for you. Get Help Now

Due to the high demands of the job, it is critical to identify when a firefighter is impaired. An error in judgment, a moment of inattentiveness or lack of coordination may endanger firefighters and people around them.

Firefighters who grapple with substance abuse may exhibit these signs:

Firefighters who abruptly interrupt their drug or alcohol consumption may face withdrawal symptoms. If not managed, these symptoms can affect the firefighter’s performance.

Some alcohol withdrawal signs include:

Firefighters should not be afraid to reach out to their peers and supervisors for help. If they do not receive timely treatment, they can lose their jobs and worsen their health situations. Withdrawal symptoms range from mild to severe and can even lead to death, so it is important to seek help immediately.

Firefighting is different from other occupations. The hectic lifestyle and high demands of the job require a specialized team of physicians to provide the appropriate treatment.

Fire departments often encourage firefighters suffering from a substance use disorder to seek help through support programs such as:

These specialized programs equip firefighters with the proper tools to overcome addiction and resume their professional lives.

“Firefighters aren’t immune to the same struggles as the general public is subject to,” said Orrange. “We have the same battles that everybody else does.”

Firefighting is a job that demands dexterity and level-headedness. Any impairment while driving firetrucks or working to put out fires can put many lives, including the firefighter’s, at risk. To minimize these risks, fire departments often carry out drug testing.

Fire departments across the United States are strict about the use of drugs and alcohol while on-duty. Firefighters who refuse to comply with the test or test positive for illegal substances may lose their jobs.

EAPs are voluntary, work-based programs that offer free and confidential resources to employees. They provide assessments of the employee’s personal and work-related issues as well as short-term counselling services, referrals and follow-up services.

EAP counselors work in tandem with fire department managers to ensure that firefighters have adequate support and resources to overcome their substance abuse issues.

The Orlando Fire Department offers EAPs to its employees, which includes seven free counseling sessions with a mental health professional. Counseling meetings allow OFD firefighters to speak with a therapist about marriage issues, stress, anxiety or various other personal problems.

These programs provide employees with resources within the community that address psychological, mental health or substance abuse problems. Orrange says OFD firefighters have access to AA and NA meetings, as well.

Firefighters struggling with a substance use disorder can attend AA or NA meetings, where they can talk about and receive support for their struggles with alcohol and drugs. They will be surrounded with individuals in similar situations who will guide them through recovery.

Support groups will hold firefighters accountable for their drug or alcohol consumption. The 12-step approach has proven very successful in helping individuals maintain a substance-free life.

The IAFF Center of Excellence for Behavioral Health Treatment and Recovery offers top-quality treatment for substance use disorders and PTSD in a comfortable, familiar setting. The center’s multidisciplinary staff ensures that clients transition safely through the levels of care and into a successful life in recovery. Learn More

Orrange says the greatest resource firefighters have is one another. The profession comprises a network of peers who help their coworkers with problems ranging from relationship issues to substance abuse.

OFD includes a peer support team, which Orrange coordinates. Members of this team are trained to address the needs of firefighters. This training group bridges the gap between firefighters and community resources, said Orrange.

If a firefighter struggles with alcohol abuse but remains reluctant to seek help, fellow firefighters step in to diffuse the situation. At times, firefighters identify problems in one another.

“If someone has an issue with alcohol, we step in and put the situation in terms they understand,” said Orrange. “It’s firefighters talking to firefighters, not a boss talking to his or her subordinate.”

He also said firefighters lift each other up physically and emotionally.

“I would like people to know that firefighters are a very resilient group, and we have a strong network of peers that we can lean on,” he said. “If somebody falls, there are a group of firefighters there to pick him or her up.”

Sonia Tagliareni,
Author, DrugRehab.com
Sonia Tagliareni is a writer and researcher for DrugRehab.com. She is passionate about helping people. She started her professional writing career in 2012 and has since written for the finance, engineering, lifestyle and entertainment industry. Sonia holds a bachelor’s degree from the Florida Institute of Technology.
[email protected]