How Long Do Benzos Stay in Your System?

Benzodiazepines can stay in your system for up to 10 days. Hair tests can show evidence of benzos for up to 90 days. Certain factors that affect detection time are body mass, duration of use, and drug properties.
AddictionPrescription DrugsBenzos How Long Do Benzos Stay in Your System?
Topics on this Page
Topics On this page
Medical Reviewer: Ashraf Ali, MD | Author: Sonia Tagliareni | Last Updated: 2/28/20 | 9 sources

Doctors typically prescribe benzos as a short-term therapy because of the addictive properties of the drug. Physicians can determine if benzodiazepines are present in an individual’s system by performing blood tests, urine tests, hair tests and saliva tests.

Currently one of the most prescribed depressant medications, benzodiazepines are classified as Schedule IV drugs under the Controlled Substances Act. When benzos are mixed with other depressants such as alcohol and prescription opioids, they become more potent, increasing the risk for serious or life-threatening complications.

Benzodiazepines such as Rohypnol are popular for facilitating sexual assaults. Saliva, blood and urine tests can determine if someone unknowingly consumed benzodiazepines.

Benzodiazepines will produce a positive urine test result as early as two to seven hours after an individual takes the drug. The drug clearance rate is the length of time a benzodiazepine will remain detectable in the body, and it varies from drug to drug.

Long-acting benzos, such as Valium, can stay in your system (urine) for up to 10 days. Halcion and other short-acting benzodiazepines can be detected for up to two days.

A urine test followed by a urinalysis is a common way to check for Xanax or other intermediate-acting benzos in an individual’s system. After the body metabolizes the drug, about one-fifth of the oral dose remains in the urine. Low-dose Xanax users may test positive for the drug for up to four days after ingestion, and heavy users may produce a positive result for up to a week after ingestion.

Metabolism also affects the outcome of urine tests. Each person’s metabolism rate is unique and varies depending on age, gender, ethnicity and the presence of liver or kidney impairment. Slow metabolism rates can mean the drug will be present in the urine for a longer time. People with fast metabolism rates will break down the drug quickly, reducing the detection window.

Several other factors influence how long a drug stays in a person’s urine, including:

These factors may result in false positives. In the event of a positive test result, physicians should determine if the patient was prescribed a benzodiazepine and followed instructions for use.

Blood tests to determine the presence of benzodiazepines in the body are more invasive than urine tests but are sometimes necessary. If a patient is hospitalized, doctors may need to give a blood test to know whether the person is intoxicated with alprazolam.

Blood tests can detect the presence of alprazolam within hours of intake, and the blood sample may test positive for up to a day after intake. However, blood tests have shorter detection windows than urine tests.

Detecting benzodiazepines with a hair sample is possible. When a person ingests alprazolam, the drug accumulates in outgrowths of hair follicles throughout the body and head. Hair testing requires a hair sample of 20 to 50 strands for laboratory analysis. Through a test called a benzodiazepine radioimmunoassay, experts will be able to determine the presence of alprazolam for up to four weeks after intake.

Because it takes roughly one month for one centimeter of hair to grow, hair tests performed within a few days of ingestion may produce inaccurate results. It is more difficult to detect alprazolam with hair tests than to detect long-acting benzodiazepines such as diazepam.

Benzodiazepines can be short-, intermediate- or long-acting. The classification depends on the drug’s elimination half-life, which describes the length of time until the concentration of the drug in the body is reduced by one-half. 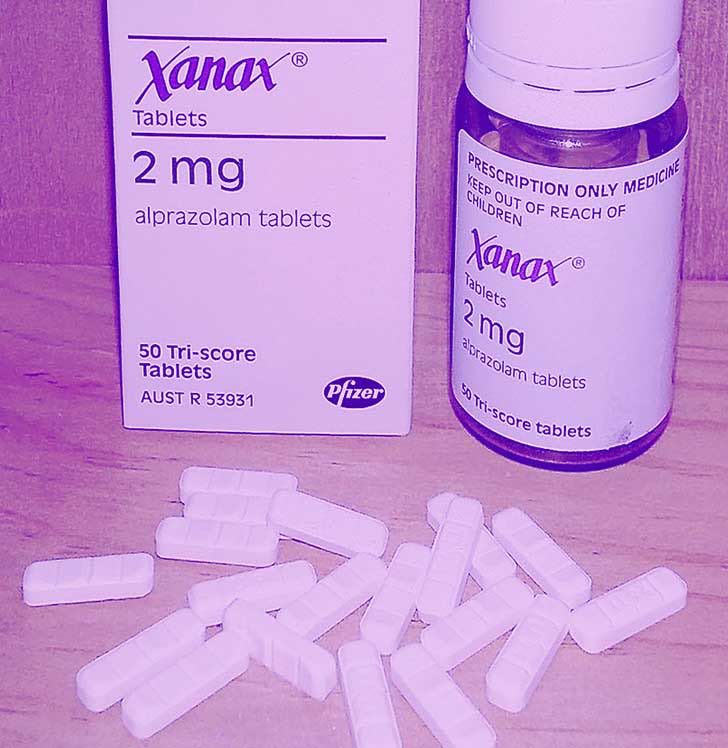 Drugs with longer elimination half-lives will remain in the system longer. The rate at which benzodiazepines take effect depends on the drug’s ability to cross the blood-brain barrier. Benzos, such as diazepam, that dissolve in fat act faster than water-soluble benzos, such as lorazepam. The peak blood concentrations of benzos typically occur within the first three hours of intake.

One dose of a fat-soluble benzo will have a shorter duration of action than a similar dose of a water-soluble benzo. This is mainly because of the rapid redistribution from the central nervous system to peripheral sites. While intermediate-acting lorazepam affects the central nervous system longer than long-acting diazepam does, the latter metabolizes into active intermediates with longer half-lives, which extends its effects. Hence, diazepam stays in the body longer than lorazepam.

Factors Influencing How Long Alprazolam Stays in the Body

Several factors influence how long intermediate-acting alprazolam stays in an individual’s body. While one person may process the drug in three days, a different person may take longer. The clearance rate of a drug depends on individual factors, drug dosage, frequency of use and other drugs used. 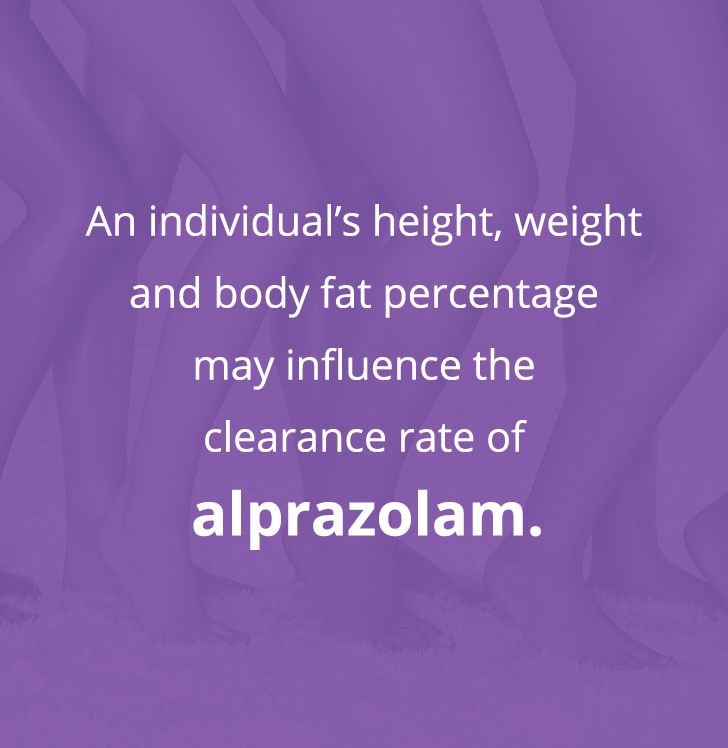 Factors such as age, physique, genetics, liver and kidney function, metabolic rate and urinary pH affect how long alprazolam stays in the system.

Elderly people take longer than young people to process alprazolam from their system, which may be because of a change in metabolic rates, altered blood flow to the liver or deterioration in internal functions.

An individual’s height, weight and body fat percentage may influence the clearance rate of alprazolam. A short, lightweight person will take longer to clear the drug than a tall, heavyweight person. Compared with the smaller person, the larger person is ingesting a smaller amount in proportion to their body size.

People who take higher doses of alprazolam will take longer than those who take lower doses to excrete the drug from their system. A normal alprazolam dose ranges from 0.25 mg to 4 mg, but sometimes people have to exceed the 4 mg dosage because of tolerance, a substance use disorder or dependence.

The frequency of use of alprazolam determines how fast the body purges the drug. Long-term users will take longer than those who have used the drug over a short period to clear the drug. Developing a tolerance often causes people to increase their dosage, which extends the detection window and causes the drug to accumulate in a person’s system.

Use of Other Drugs

Ingesting other drugs at the same time as alprazolam may change the body’s ability to process and excrete the drug. Taking medications such as cimetidine, erythromycin, itraconazole, ketoconazole and ritonavir may result in delayed liver clearance. Oral contraceptives and SSRIs such as Prozac also delay the metabolism and expulsion of alprazolam from the system.

Similarly, people may take drugs to accelerate the metabolism of alprazolam. Such drugs include carbamezepine, glucocorticoids, phenytoin, progesterone, nafcillin, phenobarbital and St. John’s wort. Studies also revealed that smokers may have a slightly higher clearance rate than nonsmokers.

Sonia Tagliareni,
Author, DrugRehab.com
Sonia Tagliareni is a writer and researcher for DrugRehab.com. She is passionate about helping people. She started her professional writing career in 2012 and has since written for the finance, engineering, lifestyle and entertainment industry. Sonia holds a bachelor’s degree from the Florida Institute of Technology.
[email protected]
Editor
,
,
Medical Reviewer