Adderall is a prescription stimulant that’s prescribed to people with attention-deficit/hyperactivity disorder. People who misuse the drug take it to focus, stay awake or feel energetic. But abusing the drug can cause heart problems, addiction and other complications.

Adderall has become one of the most well-known prescription amphetamines in the United States. It’s the go-to medication for treating ADHD, and when it’s used as prescribed, people with ADHD say they feel more focused and energetic.

Those effects make the drug desirable for people who work long hours, party late into the night or cram the day before a test. When taken in therapeutic doses, Adderall rarely causes severe side effects. But people who take the drug without a prescription usually don’t take it in safe doses.

Some people take Adderall to feel euphoric. They take dangerously high doses and often consume them in risky ways.

People who abuse the drug crush it and either snort or swallow the powder. Some people parachute Adderall; they wrap the powder in toilet paper or paper towels and swallow it.

Most people who abuse drugs call Adderall a “sometimes drug” because tolerance develops quickly. When it’s used as prescribed, people with ADHD have to gradually increase their dose to feel therapeutic effects. When it’s abused, tolerance grows more rapidly.

Many drug users say they’ll never experience a high as satisfying as the first time that they abused Adderall. Their tolerance will never be the same. But many people chase that feeling by consuming doses that can cause heart problems, mental health issues and a devastating crash.

Chasing the high increases the chances of developing an addiction. But people who have no interest in getting high and use the drug to study, work or stay awake can also develop a substance use disorder. As tolerance grows, the brain becomes dependent on Adderall. Without it, the person goes into withdrawal. For a lot of people, addiction continues because they want to avoid withdrawal.

Adderall effectively treats ADHD in most children and adults. However, Adderall prescriptions are often resold illegally. A 2016 study revealed that most people get Adderall from friends or family, and two-thirds of those suppliers had a prescription from a doctor. More than half of American adults who abuse the drug are between the ages of 18 and 25.

“In college, especially, these drugs are used as a study aid medication to help students stay up all night and cram,” the study’s co-author Dr. Ramin Mojtabai said in a press release. 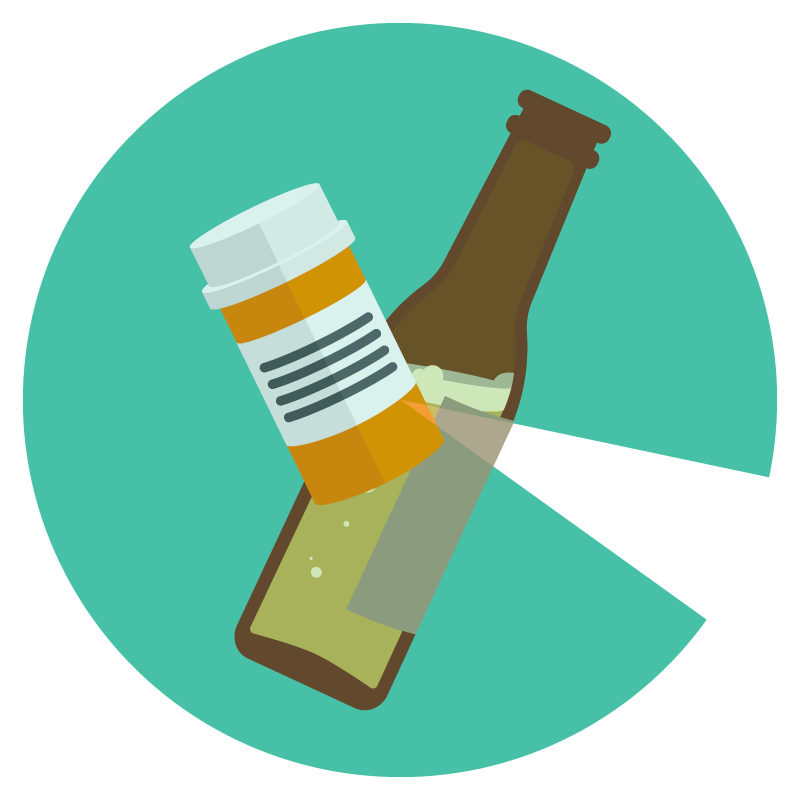 Source: 2009 National Survey on Drug Use and Health Report

Despite the prevalence of Adderall abuse on college campuses, research indicates that students who misuse ADHD medications have lower GPAs than other students, according to the National Institute on Drug Abuse. That doesn’t mean Adderall makes a person dumber.

Students who cram may be less likely to perform well in school, with or without the help of Adderall. The side effects of Adderall abuse, such as insomnia and depression, can also adversely affect school performance.

Individuals with eating disorders may use Adderall as a diet tool. The medication decreases appetite and boosts metabolism. People who use the drug to lose weight may become dependent on Adderall’s ability to help them maintain a certain body image. Nutritional deficiencies from an unhealthy diet can worsen the side effects of substance abuse.

Adderall is the brand name for a pill that contains a combination of amphetamine and dextroamphetamine. The amphetamines are chemically similar to methamphetamine, also known as crystal meth, and they cause effects similar to cocaine. 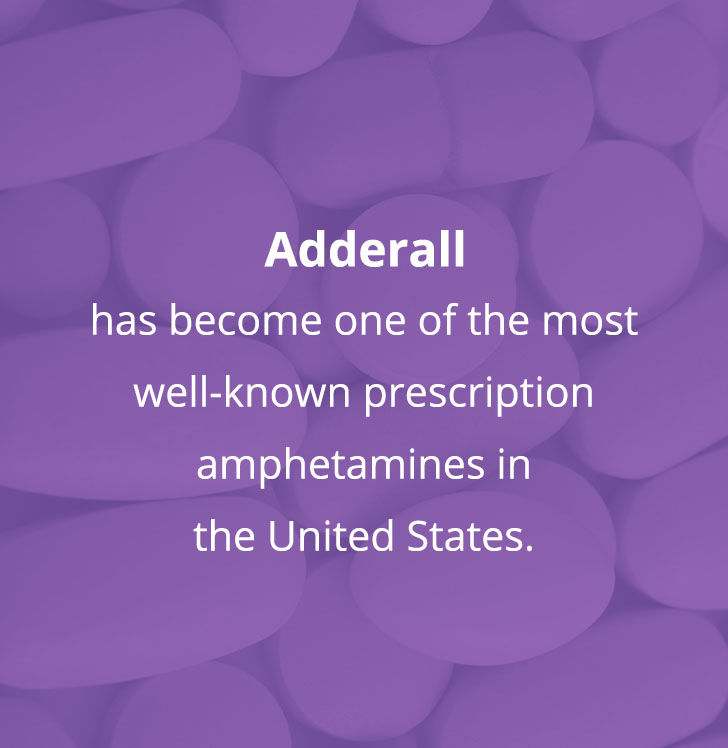 The Drug Enforcement Administration classifies the chemicals in Adderall as Schedule II controlled substances, meaning they have some medical use, but they also have a high potential for abuse and addiction.

The drugs became so common among young adults during the 2000s that The New York Times Magazine dubbed millennials “Generation Adderall.” The generation in question includes teens and young adults who were misdiagnosed with ADHD, used the drug to treat ADHD or intentionally misused the drug.

An ADHD Medication for a High-Risk Population

Adderall is a Catch-22. The drug is designed to relieve symptoms of ADHD, but people with ADHD are at an increased risk of developing substance use disorders. They are more likely to make compulsive decisions and experience high levels of stress.

Both traits are risk factors for substance abuse. People who have ADHD and don’t use their medications as they’re prescribed are at an increased risk for developing co-occurring disorders.

The authors of a 2014 report published by the American Academy of Pediatrics wrote that prescription stimulants “can reduce both ADHD symptoms and the risk of developing [a substance use disorder] and simultaneously pose a risk for abuse and diversion.”

Adderall vs. Other ADHD Drugs

Richwood Pharmaceuticals began marketing immediate-release Adderall in 1996, nearly a decade after the American Psychological Association concluded that ADHD was a mental health disorder. The drug was marketed as an improvement over Ritalin (methylphenidate), which was the most popular ADHD medication during most of the 20th Century.

Immediate-release Adderall lasts for four to six hours, and Ritalin lasts two to three hours. However, Ritalin takes less time to work. Both drugs affect the brain in similar ways.

Vyvanse (lisdexamfetamine dimesylate) is an amphetamine that’s similar to Adderall, but Vyvanse takes up to two hours to work. Its effects can be felt for up to 14 hours. Shire Pharmaceuticals bought Richwood Pharmaceuticals in 2006, and the company introduced Vyvanse in 2007. Most people who abuse ADHD medications prefer Adderall because it takes less time to work compared to Vyvanse.

During the 1990s and early 2000s, ADHD diagnoses and prescriptions for ADHD medications gradually and consistently increased, per multiple reports. Adderall prescriptions decreased slightly between 2006 and 2011, but rates of misuse among young adults increased, according to a 2016 study.

In a 2010 study designed to test the validity of an ADHD assessment, 22 percent of adults being assessed for ADHD either faked or exaggerated symptoms.

We have treatment programs that work.

The Dangers of Misusing Adderall

Most people who misuse Adderall don’t take it in high enough doses to overdose, but they do experience a range of health problems.

Side effects of Adderall misuse or abuse include:

People who snort the drug often develop nasal issues. They may have difficulty breathing through their nose or they may develop “blue boogers.” Blue, pink or orange residue gets stuck in their nostrils or drips out. The residue comes from chemicals in Adderall that aren’t absorbed through the nose.

Common side effects of Adderall include:

Everyone who takes Adderall for multiple weeks develops tolerance to the drug. People who take low doses for ADHD treatment may require a few days to adapt to Adderall. After that, most people benefit from its ability to increase focus.

People who abuse the drug may feel euphoria or intense focus during the first few times that they use it, but they’ll need higher doses to feel those affects again. Whether they take it for ADHD or illicit purposes, each person who regularly uses Adderall will become dependent on the drug.

Their brain gets used to the amphetamines. It starts to adapt to the drug’s presence. Without Adderall, these people will experience withdrawal symptoms. Those symptoms worsen based on dosage and duration of use.

Symptoms of Adderall withdrawal include:

Tolerance and dependency are warning signs of addiction. Taking a drug for the sole purpose of preventing withdrawal is a classic symptom of addiction. Long-term abuse of Adderall can also cause psychological problems, such as hallucinations, paranoia and suicidal thoughts.

Why Recovering from Adderall Addiction Is Similar to Cocaine & Meth Recovery

No medications are approved for treating Adderall addiction. Therapies for crystal meth addiction and other amphetamine use disorders are based on research on methamphetamine and cocaine addiction. Those illicit drugs cause changes in the brain similar to the changes caused by Adderall.

Rehab clinics and addiction treatment centers use clinical approaches and therapies that have been proven effective for addiction to other stimulants, such as crystal meth or cocaine. Common therapies include contingency management and cognitive behavioral therapy.

People who are used to using Adderall to study or work may have to relearn to function without the drug. It may take weeks or months to achieve normal productivity and focus without stimulants, but many patients recover from Adderall addiction without permanent detriments.

People who are in recovery from addiction who also have ADHD may be prescribed stimulants that are less likely to be misused, such as Vyvanse or Focalin, or nonstimulant ADHD medications, such as Strattera or Intuniv.