Mixing alcohol and Adderall can be a dangerous combination, one that can lead to heart problems and alcohol poisoning. Drinking while taking Adderall may also exacerbate alcohol side effects such as euphoria, convulsions and irregular heartbeat. In rare cases, using both drugs can lead to death. Combining these substances has become a common practice among high school and college students.
AddictionAlcoholMixing Drugs & AlcoholAdderall & Alcohol
Topics on this Page
Topics On this page
Medical Reviewer: Ashraf Ali, MD | Author: Trey Dyer | Last Updated: 2/28/20 | 10 sources

Adderall and alcohol are two of the most commonly used drugs among college and high school students. The substances are generally cheap and easily accessible. Alcohol is widely available at bars and stores, and Adderall is one of the most prescribed medications among young people for the treatment of attention-deficit/hyperactivity disorder.

Those without an Adderall prescription can easily obtain the drug. People who have a legitimate prescription may sell the medication to others or give it away. Students often use Adderall to pull all-nighters while cramming for tests. They also use it to party for longer periods of time. 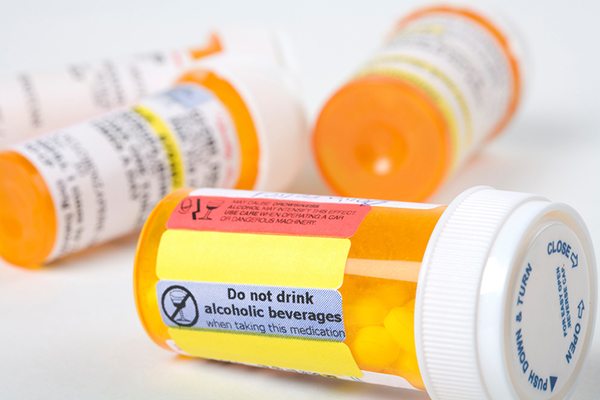 Adderall is a stimulant drug that increases heart rate and blood pressure, and alcohol is a depressant that can slow heart rate and breathing. But when taken together, they do not negate the effects of each other. Adderall lessens the depressive effects of alcohol. Alcohol can increase the euphoria caused by recreational Adderall use.

People often mix alcohol with ADHD medications so they can drink more over longer periods of time. The stimulant effects of Adderall keep people alert and prevent them from passing out, making them less likely to notice the signs of dangerous alcohol consumption. This increases their risk of alcohol poisoning.

The risks of mixing alcohol and Adderall also include serious health consequences, such as alcohol poisoning, cardiovascular problems, hallucinations and seizures. In rare cases, it can result in death.

Side Effects of Combined Adderall and Alcohol Use

According to researchers with St. Joseph’s Medical Center, concurrent alcohol and Adderall use has been linked to heart attack, arrhythmia and hypertension — even among individuals who had no prior risk factors for cardiovascular issues.

Adderall and alcohol side effects include:

These side effects can lead to more serious health problems and permanent damage to the body. In some cases, mixing the substances can cause a heart attack or a fatal alcohol overdose.

In addition to the detrimental health effects of combining alcohol and Adderall, this pattern of misuse also can lower inhibitions. As a result, individuals are more likely to engage in dangerous decision-making that may cause serious harm to themselves and others.

Lowered inhibitions are a common side effect of alcohol consumption. But as Adderall use drives higher levels of intoxication from drinking, inhibitions may be lowered to a much greater extent.

In combination, Adderall and alcohol use compounds the risks of dangerous behaviors that people would normally avoid when they are sober.

The behavioral risks of mixing alcohol with Adderall or other ADHD medications include:

While alcohol and Adderall use is not the only factor that contributes to these dangerous behaviors, combining the two substances may change an individual’s mindset. The resulting loss of control can prevent people from considering the risks of engaging in behaviors with potentially life-changing repercussions.

Adderall and alcohol are both addictive, and mixing the two substances may further increase a person’s risk for developing a substance use disorder.

Taking Adderall before or during drinking to party longer promotes binge drinking, which the Substance Abuse and Mental Health Services Administration defines as a pattern of drinking that elevates a person’s blood alcohol content to 0.08 grams per deciliter. Women typically reach this level of intoxication when they drink four standard beverages in two hours, and men may reach it after drinking five beverages in the same period.

According to the National Institute on Alcohol Abuse and Alcoholism, men who drink more than 14 alcoholic beverages per week and women who drink more than seven per week are considered at-risk drinkers. The institute reports that about 25 percent of at-risk drinkers have an alcohol addiction, and the remaining 75 percent face a greater risk of developing alcoholism and related problems.

Trey Dyer,
Content Writer, DrugRehab.com
Trey Dyer is a writer for DrugRehab.com and an advocate for substance abuse treatment. Trey is passionate about sharing his knowledge and tales about his own family’s struggle with drug addiction to help others overcome the challenges that face substance dependent individuals and their families. Trey has a degree in journalism from American University and has been writing professionally since 2011.
[email protected]
Editor
,
,
Medical Reviewer