Founded in 1953, Narcotics Anonymous is a nonprofit fellowship of people in recovery from drug addiction. The second-largest 12-step organization in the world, NA hosts free meetings open to anyone with a sincere desire to abstain from drug use.
Recovery12-Step ProgramsNarcotics Anonymous
Topics on this Page
Topics On this page
Author: Matt Gonzales | Last Updated: 2/26/20 | 5 sources

For people seeking to conquer their substance use problems, a supportive network or community plays a vital role. For millions of people with addiction, Narcotics Anonymous serves as a strong foundation on which to build a bright future.

Self-described as a “nonprofit fellowship,” Narcotics Anonymous (NA) grew from humble beginnings to a worldwide establishment without ever charging a dime. Attendees typically make voluntary contributions, to help pay for the facilities and nourishments, and then do their part to foster the process. Volunteers run weekly NA 12-step meetings, serve as sponsors for new members, and carry on the traditions put in place by the fellowship over the course of its history.

The 12 Steps of Narcotics Anonymous

1. We admitted that we were powerless over our addiction — that our lives had become unmanageable.
People battling addiction must admit that they have no control over the illness. As a result, they have lost power over many aspects of their lives.
2. We came to believe that a Power greater than ourselves could restore us to sanity.
Whether you’re an agnostic, an atheist or a believer, trusting a higher power could help you turn your life around.
3. We made a decision to turn our will and our lives over to the care of God as we understood Him.
It is important to understand the significance of a higher power in overcoming addiction. Through step three, people with addiction turn their loves over to this superior entity.
4. We made a searching and fearless moral inventory of ourselves.
People with addiction should reflect on their lives, honestly evaluating their past. Evaluating past mistakes could steer people toward recovery.
5. We admitted to God, to ourselves, and to another human being the exact nature of our wrongs.
After evaluating past mistakes, the next step asks people battling addiction to admit to the root of past wrongdoings. Sharing the nature of these mistakes with oneself, loved ones and a higher power is an important step toward recovery.
5. We were entirely ready to have God remove all these defects of character.
Individuals with addiction should prepare for their higher power to eliminate their addictive behaviors.
7. We humbly asked Him to remove our shortcomings.
People with addiction allow a higher power to eliminate character flaws. However, it is important that they separate themselves from factors that influence addictive behaviors.
8. We made a list of all persons we had harmed and became willing to make amends to them all.
Addiction strains relationships and harms loved ones. The addicted person should make a list of those whom they have wronged and be willing to admit their past transgressions.
9. We made direct amends to such people wherever possible, except when to do so would injure them or others.
Individuals should find time to apologize to those they have wronged in the past, except when doing so would cause further harm. They should tell the truth about past actions and offer a genuine apology.
10. We continued to take personal inventory and when we were wrong promptly admitted it.
The 10th step promotes vigilance against triggers. People with addiction must address their addictive behaviors should they arise. Taking a personal inventory should become a daily process.
11.We sought through prayer and meditation to improve our conscious contact with God as we understood Him, praying only for knowledge of His will for us and the power to carry that out.
This step provides daily spiritual maintenance. Maintaining a relationship with a higher power can help a person with addiction reach recovery.
12.Having had a spiritual awakening as the result of these steps, we tried to carry this message to addicts, and to practice these principles in all our affairs.
This spiritual awakening allows people in recovery to share their techniques with those suffering from addiction. Helping others through these tough times is a significant aspect of NA’s 12-step program.

NA practices a 12-Step philosophy similar to that of Alcoholics Anonymous. When you attend an NA meeting, you will be led through the 12 Steps and, at subsequent meetings, will discuss your progress through the steps and the overall progress of your sobriety. Supporters of NA believe that by attending regular meetings and making individual strides to “work the steps” you stand a good chance of overcoming your drug cravings and gaining a renewed confidence in your life. 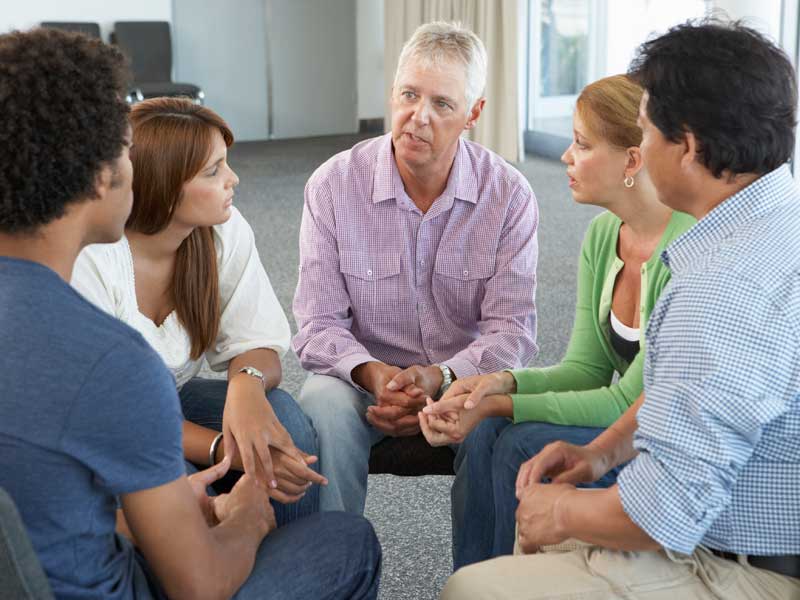 At an NA meeting, as stated by the Welcome Pamphlet: “Nothing will be demanded of you, but you will receive many suggestions.” The people you’ll meet are in various states of recovery from a variety of drug addictions. Though some people may attend only one meeting, others will go on to make 12 step NA a lifelong commitment.

Ready to make a change?Take the first step and start your recovery today. Get Help Now

With Alcoholics Anonymous taking off in the 1940s, a number of members felt the need to create a group that focused on the needs of people addicted to drugs. While AA welcomed those with drug problems, they discouraged discussion of substances besides alcohol; this included the 12 Steps of AA, which specifically mention alcohol and nothing else.

A committee of six gathered in California in August 1953, and organized the first meeting of “San Fernando Valley Alcoholics Anonymous and Narcotics Anonymous.” The name was changed to Narcotics Anonymous a month later, with Jimmy Kinnon being voted as the group’s chairman. Kinnon would go on to be known as Jimmy K., in accordance with the anonymity promoted by NA programs.

The group encountered many ups and downs, but caught on in the 1970s as meetings popped up all over the United States and other countries, including Brazil, Canada, Japan, and the United Kingdom. The first NA world conference was hosted in 1971.

NA released several minor publications over the years, which eventually evolved into the fellowship’s Basic Text, Narcotics Anonymous, in 1983. The book was comprised of the group’s defining principles, along with personal success stories of members. The text received several revisions, with the Basic Text Narcotics Anonymous 6th edition being released in 2008.

Now with more than 63,000 weekly meetings in countries all over the world, NA serves as the go-to support group for people battling drug abuse.

NA literature is available in 45 languages.

NA identifies as a spiritual organization, though in looser terms than Alcoholics Anonymous. Narcotics Anonymous and the other literature promoted by NA programs encourage members to entrust a higher power in guiding their path to recovery. What you choose as your “higher power” is up to you; for many, this can mean something more universal and less specific than God.

NA literature is available in 45 languages.

Each branch of 12 step NA operates slightly differently, and some may be more religious than others. In general, the program aims to be welcoming to a wide range of members. Atheists and agnostics have found success through NA programs, as have people of faith. For those who dislike the repeated references to a higher power, a different recovery program may be preferable.

Most doctors suggest 12-Step groups as a supplement to drug rehab. Attending regular 12-step NA meetings can help people in recovery strengthen their vow of sobriety and stay accountable for their behavior. Attending a group like NA can also provide a group of like-minded friends.

According to one study, people who attend one or two NA meetings per week show an increased abstinence from drugs. Those who attend three or more meetings a week show the highest odds of complete abstinence.

How and Where to Join NA

The Narcotics Anonymous website features a meeting search page where you can look up the meeting nearest to you. This directory also provides you with contact information for each of the more than 63,000 meetings scattered around the globe. Reach out to your local chapter and find out more about what you can expect.