Memory loss and amnesia are common side effects of binge drinking. When people black out, they are conscious but unable to create long-term memories. They are often awake, alert and able to hold conversations. However, they’ll forget the conversations within minutes and won’t remember anything the next day.
AddictionAlcoholEffectsBlackouts
Topics on this Page
Topics On this page
Medical Reviewer: Ashraf Ali, MD | Author: Chris Elkins, MA | Last Updated: 2/28/20 | 14 sources

What Are Alcohol Blackouts?

Drinking can make us feel excited, spontaneous and euphoric. But we all know that as blood alcohol content goes up, our judgment and coordination go down. Alcohol also affects a person’s ability to make memories but not in the same way that it affects other cognitive functions.

Ever drink slowly throughout a day or night? The next day, you probably woke up dehydrated with a headache and a hangover. But you could probably remember everything you did, with a little effort and reminders.

If you start the night by taking shots, chugging beer or playing drinking games, the odds of remembering everything the next day drop drastically. 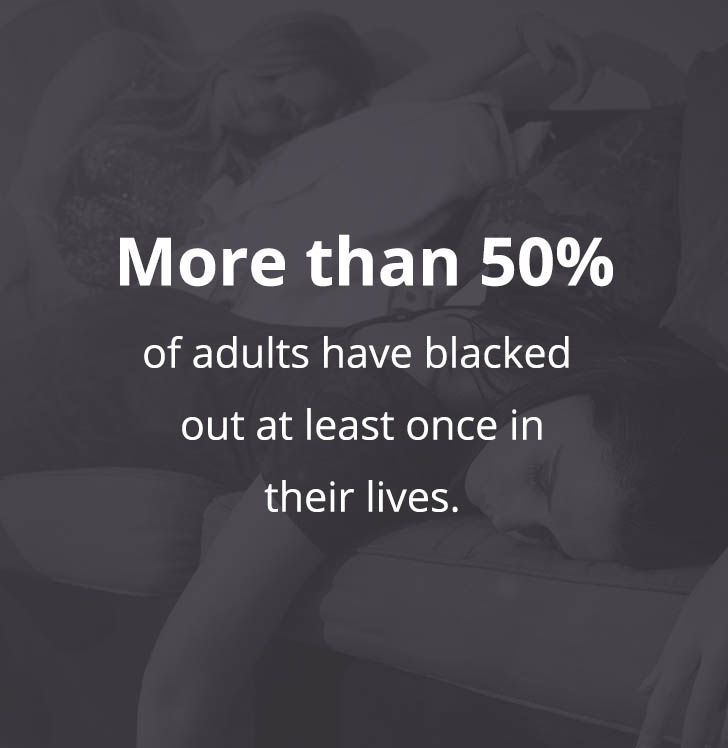 That’s because the brain’s ability to create long-term memories isn’t affected as much by blood alcohol content as it is by rapid rises in that level. Binge drinking — consuming numerous drinks in a short period— is more likely to cause alcohol blackouts, amnesia and memory loss than slow, heavy drinking, according to numerous studies.

Blacking out is different from passing out. A blackout is a loss of the ability to make memories, but people are still conscious when they’re blackout drunk. They can still walk and talk, although they may do so drunkenly.

It happens quite often, too. Despite advice from experts and beer commercials, most people do not drink responsibly. More than 50 percent of adults have blacked out at least once in their lives. The number isn’t surprising considering almost 25 percent of adults binge-drink every month, according to stats from the National Institute on Alcohol Abuse and Alcoholism.

Are you blacking out from drinking too much alcohol?

Long-term alcohol use can lead to addiction.

Effects of Alcohol on Memory

Scientists debate the exact way a memory is formed, but most agree that memories are made in three stages.

Several factors affect the likelihood that information will be transferred into long-term memory. For decades, researchers have known that alcohol disrupts the brain’s ability to transfer memories from short-term to long-term memory, but they didn’t know how. The common consensus was that alcohol killed brain cells, causing memory loss and other cognitive impairments.

“You still process information. You’re not anesthetized. You haven’t passed out. But you’re not forming new memories.”

However, scientists at the Washington University School of Medicine found in a 2011 study that alcohol didn’t kill brain cells. Instead, they found that alcohol interfered with receptors in the brain, making them produce steroids that interrupted the learning and memory-building process.

“Alcohol isn’t damaging the cells in any way that we can detect,” lead author Dr. Charles F. Zorumski said in a news release. “As a matter of fact, even at the high levels we used here, we don’t see any changes in how the brain cells communicate. You still process information. You’re not anesthetized. You haven’t passed out. But you’re not forming new memories.”

During en bloc blackouts, what most people refer to as being blacked out, someone can’t remember anything after a specific period of time. The brain’s ability to create long-term memories is completely blocked. However, sensory and short-term memories continue to function. The person can continue to drink and socialize, order drinks at a bar, dance and so on.

People who experience a fragmentary blackout may think they can’t remember what happened the night before, but their memory comes back when someone or something reminds them. Researchers believe a person may be unable to access the memory unless a reminder triggers it.

What Causes an Alcohol Blackout?

For most people, binge-drinking large amounts of alcohol causes them to black out. Studies seem to agree that heavy drinking alone doesn’t cause blackouts. A person has to drink a lot in a short period of time. Thus, the main cause of a blackout is a rapid rise in blood alcohol, which can be propelled by drinking on an empty stomach or while dehydrated.

AM I AN ALCOHOLIC?

Take our 11-question quiz to find out now.

In a 1970 experiment, researchers in the Washington University School of Medicine’s psychiatry department gave 10 men with a history of alcohol addiction 16 to 18 ounces of 86-proof bourbon in a four-hour period.

The authors concluded that the blackouts were caused by an inability to transfer information from short-term to long-term memory when blood alcohol levels were rising. The results were published in the Quarterly Journal of Studies on Alcohol. Studies with similar designs have produced similar results.

Alcohol affects people differently. Research suggests that some people’s brains are more apt to blacking out than others. The reverse is also true: Some brains may be resistant to blacking out.

In a study of 100 alcoholics published in the American Journal of Psychiatry, 36 participants said they had never experienced a blackout despite a history of heavy alcohol use.

Research also indicates that a person who has experienced one blackout is more likely to have blackouts in the future. The long-term effects of a blackout are unknown, but they may cause the brain to be more susceptible to memory losses in the future.

Studies also suggest that prenatal exposure to alcohol increases a person’s chance of experiencing blackouts in the future, and certain genes may increase a person’s likelihood to black out.

Do Women Black Out More Easily?

Similar numbers of men and women report blacking out, but men drink much more often and more heavily than women. The logical conclusion is that women are at a greater risk for blacking out than men. Researchers theorize that women may black out more easily because of differences in the ways the bodies of men and women metabolize alcoholic drinks, but more research is needed to be sure.

We do know that women are more likely to experience other effects of alcohol, such as liver cirrhosis, heart damage, nerve damage and other diseases caused by alcohol. Research on brain damage isn’t as conclusive.

Alcohol made her lose her job and friendships. Read about Kelly’s journey and how sobriety helped her find happiness.

A pair of studies — one published in Psychological Medicine and the other in Alcoholism, Clinical and Experimental Research — found that men and women both experienced brain shrinkage and memory problems after heavy alcohol consumption. The latter study found that women experienced the side effects after drinking only half as much as men.

People who are drunk or blacked out are more likely to try illicit drugs than they would be sober. In a 2004 study published in the American Journal of Alcohol and Drug Abuse, only one out of 50 college students who had experienced a blackout said they blacked out after drinking beer alone.

Other studies have found using benzodiazepines such as Valium and Rohypnol alongside alcohol greatly increase the chances of a blackout. Abusing these drugs without alcohol can cause memory loss, but alcohol enhances the effects of the drugs. Research also indicates that smoking marijuana while drinking increases the likelihood of blacking out.

Popular media and some celebrities with drug problems glamorize blacking out, and not being able to remember what happened the night before is the topic of many fun-filled tales. But blackouts are no laughing matter, according to expert researcher Dr. Marc Schuckit.

“Some people think that blackouts, very bad hangovers, and outrageous behaviour at parties are very funny,” Schuckit said in a press release for a study on college students who blacked out. “This does not represent ‘fun.’ People don’t understand how dangerous blackouts are. In fact, people have oodles of misconceptions about drinking.”

People who are experiencing being blackout drunk often feel similar symptoms to being drunk. They feel carefree, are overly friendly or overly aggressive, have slurred speech and can’t walk straight. Signs that they may be blacking out or are blackout drunk include losing their train of thought, not understanding normal speech and getting confused about recent events.

Schuckit’s study and several others have found that people who black out from drinking risk a number of negative consequences.

Alcohol poisoning and death from alcohol overdose are direct consequences of drinking too much alcohol. 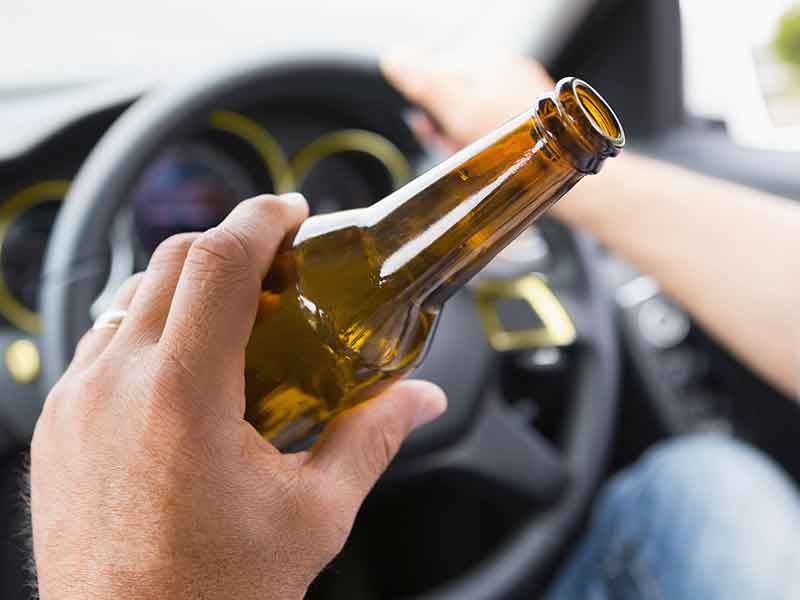 They’re also more likely to engage in other risky behavior. People report driving cars, having unprotected sex, vandalizing property, getting into fights and abusing illicit drugs when blacked out.

“People don’t understand how dangerous blackouts are. In fact, people have oodles of misconceptions about drinking.”

Long-Term Effects of Blacking Out

The long-term effects of a blackout are unknown. Short-term effects of alcohol abuse — such as coordination problems, slurred speech and blurry vision — fade when alcohol is metabolized, which can take hours or days.

Heavy alcohol use contributes to a shrinkage of the brain similar to Alzheimer’s disease, which is characterized by memory loss.

However, long-term effects of chronic alcohol abuse — such as liver damage, nerve damage and increased cancer risk — do not always go away. For example, people with minor liver problems can recover from heavy drinking if they stop drinking. But the liver can’t recover from severe damage or scarring.

The easiest way to avoid blacking out is to limit how much you drink. If you’re committed to drinking heavily or for long periods of time, then pacing yourself throughout the day or night will prevent your blood alcohol from rising too quickly.

To prevent blackouts you should:

A good rule of thumb is to only consume one drink per hour and to have a glass of water for every drink you consume.

Be aware of blackout warning signs. If you’re having difficulty concentrating, remembering recent events or keeping track of a conversation, you may be close to getting blackout drunk. If you’re in that situation, find someone you trust and find a safe ride home.

If you’re worried about how much a friend has had to drink, ask him about something that occurred 10 to 15 minutes ago. If he can’t remember, he might be blacked out. The best option is get the friend home safely. If you see warning signs for alcohol poisoning or overdose — such as vomiting, difficulty breathing, or cold or blue skin — then get emergency medical help immediately.

If you think you’ve experienced a black out, talk to friends that you were with about what happened. If you made an unsafe sexual decision, talk to your doctor about being tested for a sexually transmitted disease. You can recover from an alcohol blackout by drinking water and beverages containing electrolytes, such as sports drinks. Eating fruits, vegetables and other nutritious foods can also help your body recover from a long night of drinking.

You don’t have to drink heavily or quickly to have fun. If you’re unable to control how much you drink, avoid drinking altogether. You can still have fun while being sober. If you have experienced a blackout before, you’re likely at a higher risk for blacking out in the future and should exercise caution.