Sobriety not only gave Kelly Fitzgerald her life back; it also gave her a job, a fiancé, and a brand new home.

It’s why her mantra is: “Recovery is hard but it’s worth it. I’m proof.”

As a kid in the suburbs of Philadelphia, Kelly tried so hard to fit in with the cool kids. She even went as far as taking a ‘how to make friends’ class with her middle school guidance counselor.

But nothing worked. Until she found booze.

‘Once I started, I couldn’t stop.’

Kelly was 15 when she had her first drink. There’s a vague memory of raiding a liquor cabinet with a friend, taking shots of gin and throwing up in the sink.

The alcohol made her relaxed and funny. The drugs that soon followed made people think she was cool. Suddenly everyone wanted to be Kelly’s best friend.

“I became the popular girl I had always wanted to be. I never thought it could escalate or that I would wake up one day and ask: ‘who am I? What am I doing? How did it get to this point?’”

In college, Kelly dismissed the blackouts; they happened to everyone, right? She told herself she didn’t have a problem because she could go days without a drink. Everyone binge drinks, she told herself.

But not everyone wakes up in strange men’s beds. Or in cop cars.

“Once I started, I couldn’t stop,” Kelly said.

‘There’s nothing wrong with you. You’re an alcoholic.’

After college, Kelly moved to Cancun to work for a tourism company that catered to spring breakers.

While her friends were building their careers, getting married and having kids, Kelly was living the literal high life — doing coke, dabbling in ecstasy, and washing it all down with vodka — in Mexico.

“I was trying to avoid real life,” she said.

She eventually got a dream job running the social media and internet reservations channel for a company that offered dolphin tours. But she kept showing up late and hungover. Sometimes she didn’t show up at all. 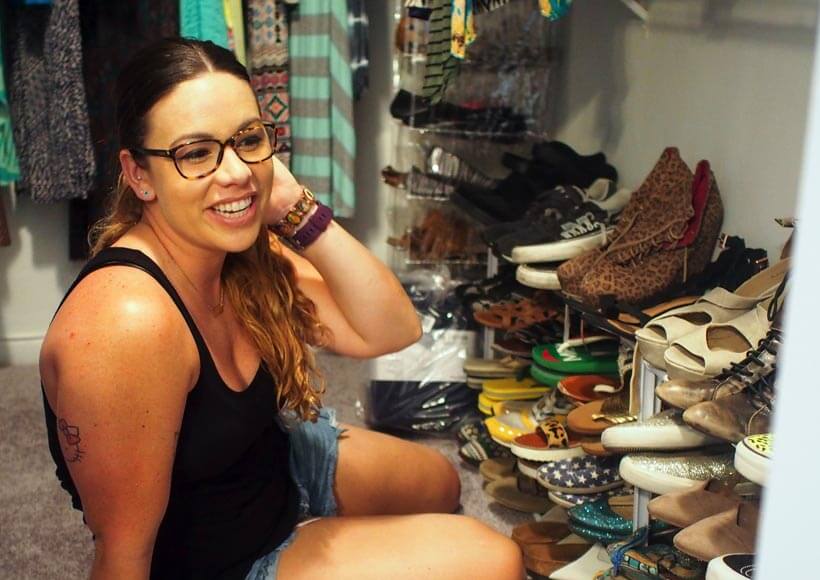 Kelly Fitzgerald will celebrate her third year of sobriety, in May

She knew she couldn’t do both. Rather than give up her lifestyle, Kelly quit her job.

In 2013, a friend invited Kelly to a bachelorette party in nearby Punta Cana. It was a trip that would change her life forever.

As she was packing her bags, Kelly’s boyfriend Fernando said he was worried. He knew she couldn’t control her alcohol. He had watched as she had tried — and failed — to self-regulate.

She would tell herself she would have just one beer; she had five. She would promise herself she wouldn’t take any shots; she had three. He had watched over and over again as she dealt with the failure and shame of not being able to moderate her drinking. 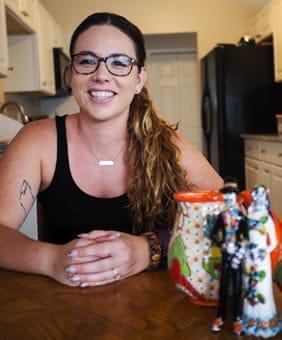 The only times they fought, it was about alcohol.

Kelly promised Fernando she would text him the whole time she was away to prove she was okay. When she stopped sending him messages mid-trip, he knew she had lost control.

As she was waiting for her return flight back to Cancun, nursing a terrible hangover and trying to recall exactly how she had made a fool of herself in front of her friends, Kelly called her mom. In between sobs she told her mom she was at the end of her rope.

What was wrong with her, she asked. Why couldn’t she drink like a normal person?

“There’s nothing wrong with you. You’re an alcoholic.”

It finally clicked. Alcoholism runs in her family. Kelly realized her relationship with alcohol was — and always would be — different from others’.

“I said enough. I told myself I was done drinking and using,” Kelly said. “I decided to try something new: stopping altogether.”

‘I didn’t realize I was making amends.’

The feelings of shame and guilt got worse when Kelly landed in Cancun. When he picked her up at the airport, Fernando said it was over. He had moved out of their apartment.

It was a repeat of all her past relationships. Boyfriends didn’t want to take care of her, or constantly remind her about what had happened the night before.

“It took a while to realize I was the problem, l was the toxic person. Here I was ruining another relationship with a guy who cared about me.”

Those first few days, alone and sober, were some of the hardest of her life. The feelings of shame and inadequacy were amplified by the symptoms of alcohol withdrawal. She couldn’t sleep; she couldn’t stop sweating; her stomach was bloated and painful.

Kelly doesn’t recommend quitting like she did, alone and without support. But at the time she was too stubborn to ask for help. She felt like she deserved to be miserable.

She was also scared to say aloud that she was an alcoholic.

Kelly sent an email to the girls she had attended the bachelorette party with, apologizing for her behavior and explaining that she had quit drinking. Replies came flooding back: “We forgive you. We’re so proud of you.” She didn’t realize she was making amends.

Kelly and Fernando met at a nightclub. They both liked to party, but Fernando was always able to control his drinking. He never blacked out. He never did things he would regret.

He didn’t believe her when Kelly told him she had quit drinking. But when he saw her after that first week, saw just how serious she was about quitting, he moved back in.

They’re getting married next year. In February, they bought their first home together.

“I’m very lucky that he came into my life. He triggered that change and pushed me to give sobriety a shot. I am really grateful he was there for me and stuck by me.”

In summer 2014, she and Fernando moved to Florida. Kelly immediately enrolled in a local 12-step program that she still attends today

At the meetings she met other women who had experienced similar struggles. They came out the other side and were normal people with happy lives. They assured her everything she was experiencing was 100% normal.

Kelly had this fear her life would be over if she stopped drinking. After all, it was alcohol that had enabled her social life. But she faced her fears. And for the first few months, she said, life was a little hard. 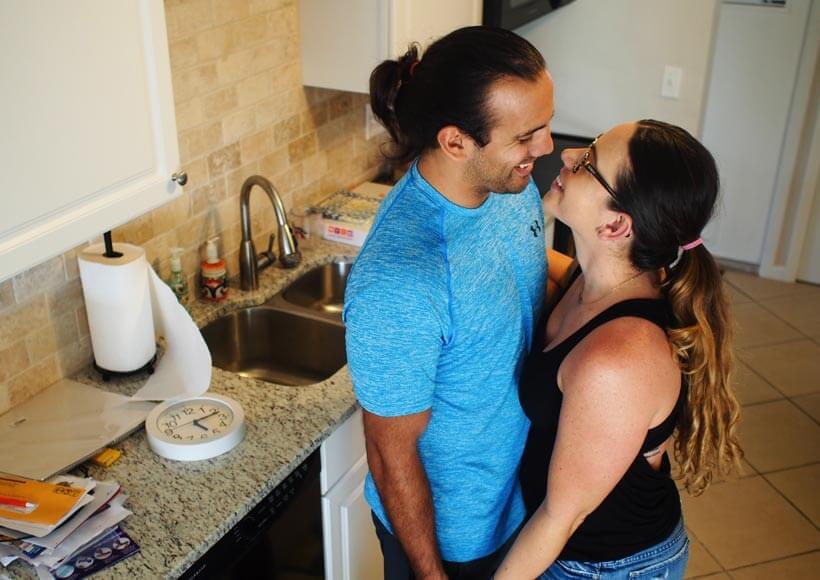 Kelly and her fiance, Fernando

“There was a grieving period,” she said. “It’s like a breakup. You have to give yourself time to get over it.”

“It was so much better than any of the fun I thought I was having. I think alcohol plays tricks on you. It makes you think: ‘this is the best party ever!’”

And you know what? She still had fun. People still wanted her around.

Looking back, Kelly says she was always on the search for something to fill her up: the next high, the next buzz, the next man to make her feel good about herself. But it was never enough.

“Drugs and alcohol helped me never feel satisfied. I was always looking for more, more, more,” Kelly said. “Now I am satisfied with waking up and seeing a beautiful sunrise and being alive. That’s enough.”

Everything You Need To Know About Sober Travel

Kelly started her blog, sobersenorita.com, after eight months of sobriety. At first, it was a means to chronicle her life as an American in Mexico. But on her one-year anniversary of sobriety she decided to open up to her readers. She told them about her past, about her journey.

“The response I got was crazy.” 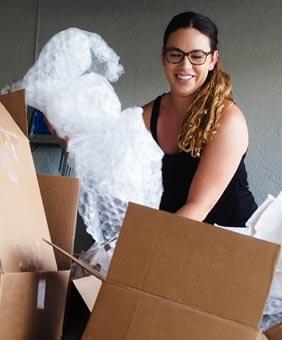 This post went viral. The Huffington Post picked it up. It was reprinted in five languages. Friends and strangers wrote to say how proud they were of her. They confessed their own struggles with alcohol.

Overwhelmed with all the support, Kelly repositioned her blog and now writes about sobriety-related topics. Recent posts include: “How To Deal With People Who Aren’t Supportive Of Your Sobriety”; “The Hardest Parts About Being Sober” and “Everything You Need To Know About Sober Travel.”

Websites and companies started reaching out and asking her to write for their sites. Now she makes her living as a freelance writer and blogger. She’s also an unofficial therapist to her readers.

“A lot of people can’t believe that I’m someone who had a drinking or drug problem. I don’t look like the stereotype. But it can happen to anyone, and anyone can get out of it.”

Kelly celebrated her third year of sobriety in May.