Ecstasy and molly are street names for MDMA, a type of amphetamine that can cause stimulant and hallucinogenic effects. Some people who use the drug experience symptoms of addiction, but research on the addictiveness of MDMA is inconclusive.

The unique chemical structure of MDMA causes both hallucinogenic and stimulant effects, such as bursts of energy, changes to how time is perceived and sensitivity to touch.

Ecstasy and molly come in pills, capsules and powders. They’re well-known club drugs that are popular at music festivals. In 2016, an estimated 2.4 million people reported using ecstasy in the past year, according to the National Survey on Drug Use and Health published in September 2017.

What’s the Difference Between Ecstasy, MDMA and Molly?

In the past, molly referred to a more pure form of MDMA than ecstasy. But pure forms of MDMA are rare in the United States. Today, molly and ecstasy may be used interchangeably as street names for MDMA. Most people who buy the drug know it’s mixed with other unknown substances.

Studies have found that ecstasy tablets contain multiple substances in addition to MDMA. Some of these substances included caffeine, ketamine, methamphetamine, PCP, cocaine and heroin.

Ecstasy is rarely used alone. Most individuals combine it with alcohol, marijuana or other substances. Mixing molly with other drugs can exacerbate the effects of both substances.

The Effects of Ecstasy, Molly and MDMA

People use ecstasy to feel happy, energetic and disconnected from reality. Others use it to feel the drug’s hallucinatory effects. It can change how people perceive time. It also affects vision and hearing.

The potential benefits are usually accompanied by unwanted side effects. Side effects of MDMA use include:

Many people use ecstasy in risky situations, such as in dance clubs or at music festivals. They’re more likely to be malnourished, dehydrated and sleep deprived in these settings. Using molly in risky situations also increases the likelihood of overdosing.

Overdosing on MDMA is rarely deadly, according to the National Institute on Drug Abuse. But it can cause serious health problems, including fever, liver damage, kidney problems and cardiovascular failure.

Other signs of an MDMA overdose include panic attacks, seizure and faintness. Mixing molly with alcohol or other drugs increases the risks of serious side effects, such as a dangerous rise in body temperature.

How Long Does Ecstasy Last?

The duration of effects varies depending on how a person uses the drug. Unlike other stimulants, ecstasy is most often swallowed, according to the Drug Enforcement Administration. When people swallow the drug, they usually feel the effects within 30 to 45 minutes. These primary effects tend to persist for between four and six hours.

Some minor effects can be felt for up to two days. MDMA can stay in your system for more than 40 hours, and most drug tests can detect MDMA in the urine two to four days after last use. Repeatedly using the drug can increase the amount of time it takes for the body to metabolize it, increasing the potency and duration of the effects.

While the drug appears to have addictive properties, research hasn’t concluded how addictive ecstasy is. It affects the same areas of the brain as other addictive drugs, according to NIDA. Animal studies show that MDMA causes drug-seeking behavior, but animals seek it less often than they seek other addictive drugs. 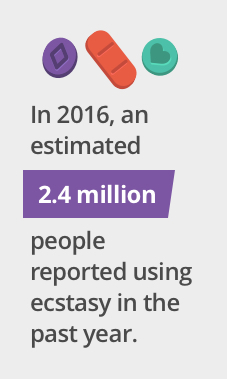 Some evidence indicates that MDMA affects parts of the brain in charge of self-control, pleasure and reward. Adaptations to these systems drive addictive behavior in people addicted to other drugs. However, researchers know little about how MDMA affects the brain. Their understanding of how other drugs lead to addiction is much stronger.

People who use molly have reported classic symptoms of addiction, including cravings, tolerance and withdrawal symptoms, and some continue to use the drug despite negative consequences.

Ecstasy is one of the less addictive stimulants and one of the more addictive hallucinogens. The number of people who listed ecstasy as their primary reason for going to rehab in 2015 was comparable to the number for all other hallucinogens combined, according to the 2005-2015 Treatment Episode Data Set by the Substance Abuse and Mental Health Services Administration.

In contrast, more than 60 times as many people sought treatment for methamphetamine addiction than ecstasy addiction that year.

Little research has been conducted on treating MDMA addiction. No medications are available for the treatment of stimulant addiction. NIDA recommends cognitive behavioral therapy and support groups for people struggling to quit molly.

Many people use ecstasy to enhance the experience of attending a party or music festival. But the drug can also cause dangerous side effects. Regular ecstasy use may cause long-term health effects, including changes to the brain that make quitting difficult.