DMT is a potent psychedelic drug that can cause violent vomiting, intense hallucinations and other serious physical effects. While DMT use is a common ritualistic practice in some regions of South America, the drug is illegal in the United States.

Referred to as “the spirit molecule” by many and featured in a documentary of the same name, DMT is a hallucinogenic drug that occurs naturally in plants and the human brain. It can also be manufactured in labs.

For centuries, DMT has been used in spiritual rituals in countries such as Peru. The substance arrived in the United States in the 1900s and gained popularity as a drug of abuse in the 1960s. It was classified as a Schedule I drug when the Controlled Substances Act was passed in 1971.

DMT, or dimethyltryptamine, causes a high that lasts less than an hour but can feel like days.

In the last decade, the drug’s popularity in the United States surged as it was featured in movies and endorsed by celebrities.

Comedian Chelsea Handler traveled to Peru and took the controversial drug while filming her 2016 Netflix docuseries, “Chelsea Does,” to show people what the experience was like.

How Is DMT Abused?

Most people consume DMT the way Handler did — by drinking it in an herbal tea called ayahuasca. The drug can also be smoked, snorted or injected.

Ayahuasca is brewed from Amazonian plants that naturally contain DMT and monoamine oxidase inhibitors (MAOIs). When people drink ayahuasca without an MAOI, they won’t feel its effects. That’s because the body’s enzymes break DMT down before its psychoactive effects kick in.

When combined with an MAOI, however, ayahuasca produces a long-lasting and intense hallucinogenic high.

Why Is DMT Used?

People use DMT for its hallucinogenic properties. When people drink, smoke or inject DMT, they enter a dreamlike state. The drug causes intense visual hallucinations and changes a person’s perception of time and body image.

After drinking ayahuasca in 1953, writer William S. Burroughs praised the drug for allowing him to travel through space and time.

Some people who use DMT seek a spiritual experience or a deeper understanding of themselves. The drug produces strong emotions and makes people reflect on their concerns and their past. Ayahuasca users may drink the tea in search of spiritual healing.

People who use hallucinogens recreationally may take DMT because the powerful hallucinatory effects don’t last long. A 2016 report by the Drug Enforcement Administration stated that the short duration of DMT is appealing to those who prefer a briefer psychedelic experience than LSD and other hallucinogens offer.

The psychological effects of DMT can include intense visual and auditory hallucinations, an altered sense of time, depersonalization and an unsettling sensation that you aren’t real. Some people feel detached from their body.

DMT’s hallucinogenic effects come on rapidly, but they only last for 30 to 45 minutes. When people smoke the drug, the effects wear off in five to 30 minutes.

Tripping on DMT is often depicted as a deeply spiritual experience, but the drug’s effects are unpredictable and not always pleasant. Many people vomit or lose control of their bowels after ingesting DMT, particularly in its ayahuasca form.

Other signs and symptoms of DMT use include:

It’s difficult to know how DMT will affect you, how intense the effects will be or how slowly time will appear to pass while under the influence. Because the drug is so unpredictable, people often have a sober person nearby to supervise them and assist if any problems develop.

People who take DMT may experience extreme hallucinations, such as seeing alien lifeforms, gods and past-life versions of themselves. These trips may include a number of terrifying and potentially dangerous experiences. Some people have trouble readapting to reality after using the drug.

Based on reports by DMT users, the drug has the potential to make you question your life’s decisions, your religion and your overall beliefs. It can be exhausting and confusing, and you may lose touch with your physical self. This may put you or others in harm’s way.

It’s unclear whether people can develop an addiction to DMT or a physical dependence on the drug — but unlike some other hallucinogens, DMT use does not seem to cause tolerance. 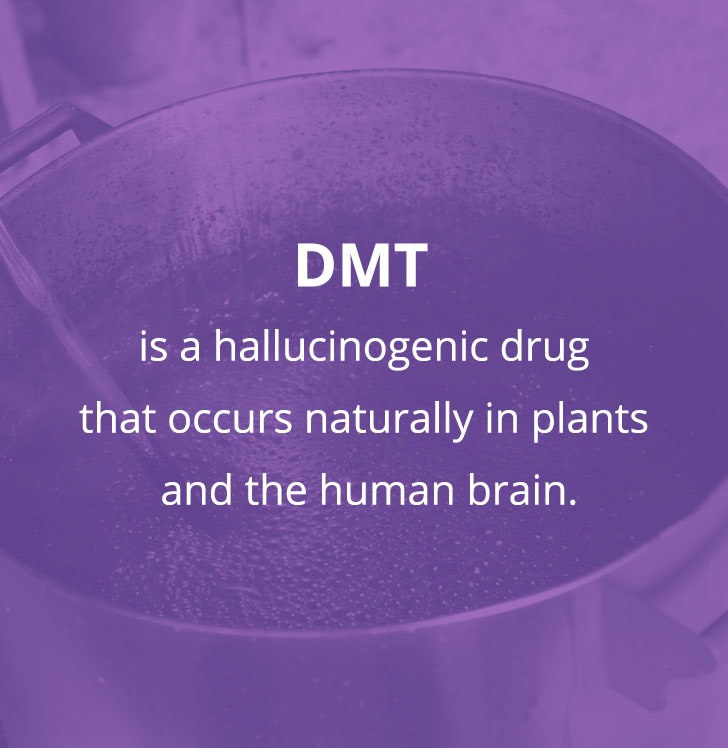 While a 2014 study published in the Journal of Psychopharmacology found that DMT’s desirable effects could indicate a high potential for abuse, chronic and repeated use of the drug is rare.

The 2012 Global Drug Survey showed that DMT users have a relatively low urge to repeatedly use the substance, which suggests the likelihood of becoming psychologically dependent on it is minimal.

But some people who enjoy a DMT trip may seek to use it again.

According to a 2017 study in the journal Scientific Reports, long-term use of ayahuasca does not appear to impair thinking, cause addiction or worsen mental health problems.

Because of DMT’s rarity and limited side effects, the rehab community doesn’t treat many clients who use the drug. This may change as it continues to grow in popularity. If you or someone you know has a DMT problem, reach out to a treatment center and speak with a doctor. You can also attend a local support group, such as Narcotics Anonymous.