The hallucinogen class of drugs causes people to sense nonexistent things. The brain thinks it sees something, hears a sound, feels a sensation or smells a scent that isn’t real.

Experts think the drugs cause hallucinations by disrupting communication between chemical systems in the brain and spinal cord. These areas of the nervous system are in charge of sensory perception.

The drugs also affect parts of the brain that control other vital functions, including sleep, hunger and mood. A subclass of hallucinogens called dissociative drugs makes people feel disconnected from their body or environment.

Hallucinogen use can cause a variety of short- and long-term health effects. 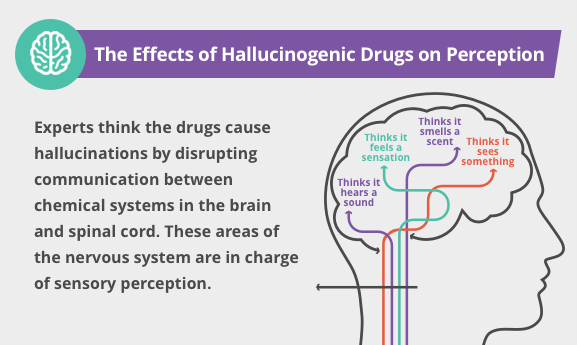 In addition to causing hallucinations, hallucinogens cause diverse psychoactive effects. They can make people feel relaxed, high or energetic.

The side effects of dissociative drugs include:

Specific dissociative drugs also cause unique side effects. The effects of PCP include seizures, violent behavior and psychotic symptoms. Ketamine can cause sedation and amnesia. Salvia abuse can cause intense mood swings, including uncontrollable laughter.

Therapeutic use of dextromethorphan, a common ingredient in cough suppressants, is safe in low doses. But dextromethorphan abuse, a practice some people call robotripping, can cause

People who use hallucinogens refer to their experiences with the drugs as “trips.” They call an experience that causes positive effects, such as happiness, heightened awareness and abstract thinking, a good trip.

Unpleasant side effects, such as anxiety, paranoia and panic, can lead to a bad trip. Bad trips are characterized by terrifying thoughts, loss of control and insanity.

Deaths from mescaline, mushroom or LSD overdoses are rare, according to the Drug Enforcement Administration. These drugs may increase the risk of death from dangerous behavior, accidents or suicide. High doses of PCP or ketamine can cause death.

Ketamine can cause an exceptionally bad trip called a k-hole. People who have experienced a k-hole say they felt like their consciousness disassociated from their body, according to Columbia University.

Mixing with Other Drugs

Some people mix molly and alcohol to feel more carefree. Others combine LSD and alcohol to enhance the hallucinatory effects. Mixing alcohol and MDMA can cause dangerous changes to body temperature, leading to organ damage and overdose.

Taking hallucinogens with other drugs that cause hallucinatory effects, such as marijuana, may increase the chances of having a bad trip. Hallucinations are unpredictable. Taking multiple drugs that disrupt the brain can cause serious health problems.

Regular use of most hallucinogens leads to tolerance. When people develop tolerance to a drug, they require higher doses to feel the same effects. However, DMT does not seem to cause tolerance, according to the National Institute on Drug Abuse.

Tolerance to hallucinogens usually fades quickly. Few hallucinogens produce traditional withdrawal symptoms. MDMA and PCP can be addictive and lead to uncontrollable behavior. People addicted to these drugs often need rehab to recover. Other hallucinogens do not appear to be addictive.

The short-term effects of hallucinogen use last between one and 12 hours depending on the drug. However, other effects may persist for several days or weeks.

People who use hallucinogens sometimes have flashbacks to hallucinations experienced during a trip. Recurring flashbacks characterize hallucinogen persisting perception disorder, sometimes referred to as HPPD.

Symptoms of HPPD include:

The disorder is usually associated with LSD, but reports of other hallucinogens causing HPPD exist. Symptoms of HPPD sometimes improve without treatment, but medications may spur recovery from the disorder. For some, the symptoms may last for years.

Overall, people use hallucinogens to experience alternative realities or to think abstractly. The drugs are not associated with rates of addiction comparable to other illicit drugs. But they can cause serious short-and long-term health effects.