How Long Do Amphetamines Stay in Your System?

Amphetamines stay in your system for between two and five days. Different amphetamines stay in the body for different lengths of time. In general, amphetamines stay in urine for up to four days and in hair for 90 days.
AddictionPrescription DrugsStimulantsHow Long Do Amphetamines Stay in Your System?
Topics on this Page
Topics On this page
Medical Reviewer: Ashraf Ali, MD | Author: Sonia Tagliareni | Last Updated: 2/28/20 | 9 sources

Amphetamines are a group of central nervous system stimulants that include amphetamine, dextroamphetamine and methamphetamine. Doctors typically prescribe amphetamines for narcolepsy, obesity and attention-deficit/hyperactivity disorder.

Amphetamines can be detected in the blood for four to six hours, in the saliva for 24 to 48 hours, in urine for up to four days and in the hair for up to 90 days.

Tests to detect the presence of substances of abuse can be done using urine, saliva, hair and sweat samples. Home tests consist of two steps: completing a simple urine test and, if the result is positive, sending a sample to the laboratory for further testing.

Home tests are usually reliable, but certain factors may influence their accuracy, including:

According to the U.S. Food and Drug Administration, amphetamines will produce a positive urine test result from four to six hours after intake and will remain detectable in a person’s system for two to three days after intake. A positive amphetamine test generally means that the individual used the drug in the last one to four days. Regular users of the drug may test positive for up to a week after taking it.

Doctors can also screen for amphetamines by testing a strand of hair or the blood. If the doctors suspect amphetamine injections, they may encourage the patient to test for HIV and hepatitis B or C.

People should note that use of some over-the-counter and prescription medicines may result in a positive test result for amphetamines. False positives are possible in people taking antihistamines, nasal inhalers, cold medicines and some medications for depression.

Amphetamines can be detected in a person’s urine for up to three days after intake depending on urine pH and individual metabolic differences. Frequent amphetamine users may produce positive urine tests for two to four days after intake.

At-home tests are usually sufficient to indicate the presence of a drug in the urine. A positive result requires the individual to send the sample to a laboratory for more testing. Lab tests are more reliable than home tests because they can rule out false positives caused by certain foods, supplements, drinks or medications.

Methamphetamine will stay in the plasma for four to six hours. Blood tests can determine the difference between amphetamine abuse or proper use as prescribed by a doctor.

Depending on the length of hair, amphetamines can be detected for up to 90 days after ingestion. Hair tests are potentially the most reliable tests for detecting prior use of amphetamines, although they cannot detect recent or occasional drug use.

However, hair tests may be biased based on a person’s hair color — darker hair contains more methamphetamine than lighter-colored hair because the drug binds better to melanin in dark hair.

Drugs travel from the bloodstream to the hair follicles and can be detected about seven to 10 days after intake. Hair structure, growth rate, melanin content, hygiene and cosmetic hair treatment may affect the concentration of drugs in the hair.

Oral fluid tests can detect amphetamines from 24 to 48 hours after intake. Saliva tests are noninvasive, and it is easy to collect samples. They can detect the parent drug rather than its metabolites and can detect same-day use in some cases.

Using a swab or absorbent pad are the most common ways to take a saliva specimen. However, if blood is present in the oral fluid sample, additional blood or urine tests will be required for accuracy. Because a limited amount of saliva is collected for a sample, it may not be possible to perform multiple saliva tests with a single sample.

Effects of Amphetamines on the Brain and Body 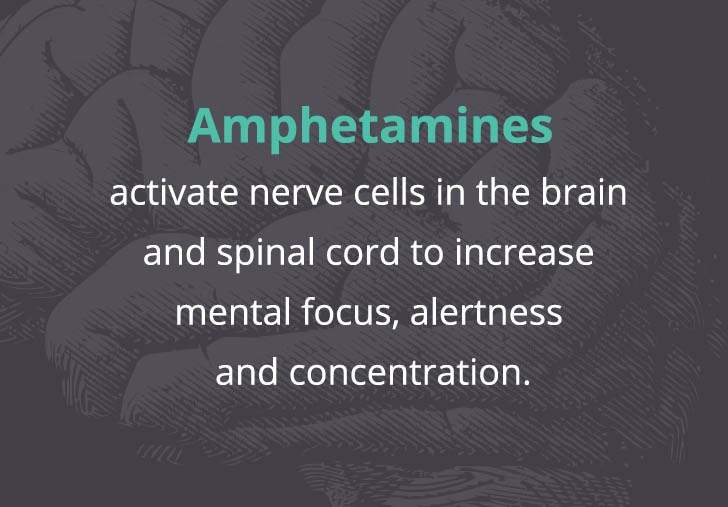 Amphetamines activate nerve cells in the brain and spinal cord to increase mental focus, alertness and concentration. Contrary to the short-lived effects of cocaine, which affect the body in a nearly identical way, the effects of amphetamines can last for hours after intake. Additionally, mixing amphetamines with alcohol and other drugs magnifies the effects. Amphetamines take very little time to act on the body.

Methamphetamine changes to amphetamine in the body and may cause agitation, delusions, hallucinations, aggressiveness and paranoia. Abuse of the drug can lead to complicated health issues including stroke, heart disease, convulsions and advanced tooth decay. Misusing amphetamines also can result in an overdose.

Symptoms of amphetamine overdose include:

Health care providers may order amphetamine tests to determine whether their patients are taking the proper dose. Similarly, amphetamine tests may be required in professional settings while employees are undergoing substance abuse treatment.

Sonia Tagliareni,
Author, DrugRehab.com
Sonia Tagliareni is a writer and researcher for DrugRehab.com. She is passionate about helping people. She started her professional writing career in 2012 and has since written for the finance, engineering, lifestyle and entertainment industry. Sonia holds a bachelor’s degree from the Florida Institute of Technology.
[email protected]
Editor
,
,
Medical Reviewer