How Yoga Helped Her Conquer a 20-Year Alcohol Addiction

Esther Nagle was 16 when she discovered the seeming magic of alcohol.

It made her feel relaxed, soothed her insecurities and made it easier to talk to boys.

Growing up in the 1970s and ’80s in a small village in the Rhondda Valley in South Wales was difficult at times for Esther.

On the playground, kids would taunt her about her name. There were no other “Esthers” among her age group. In fact, the only other Esther her peers knew of was a middle-aged TV journalist and talk-show host named Esther Rantzen. Not exactly the epitome of cool.

It didn’t help matters when kids who’d been reprimanded by her mother, the local French teacher, shouted at Esther in school — or that Esther excelled in French. Those just added to the list of things that made her odd. And the more she tried to fit in, it seemed, the more she stood out.

But no one was as hard on Esther as she was on herself.

Looking at herself in the mirror, she saw a girl with weird hair and big teeth. An ugly girl who wasn’t worthy of the attention of the boys she had crushes on. An awkward girl who was “different” from everyone else and unlovable. 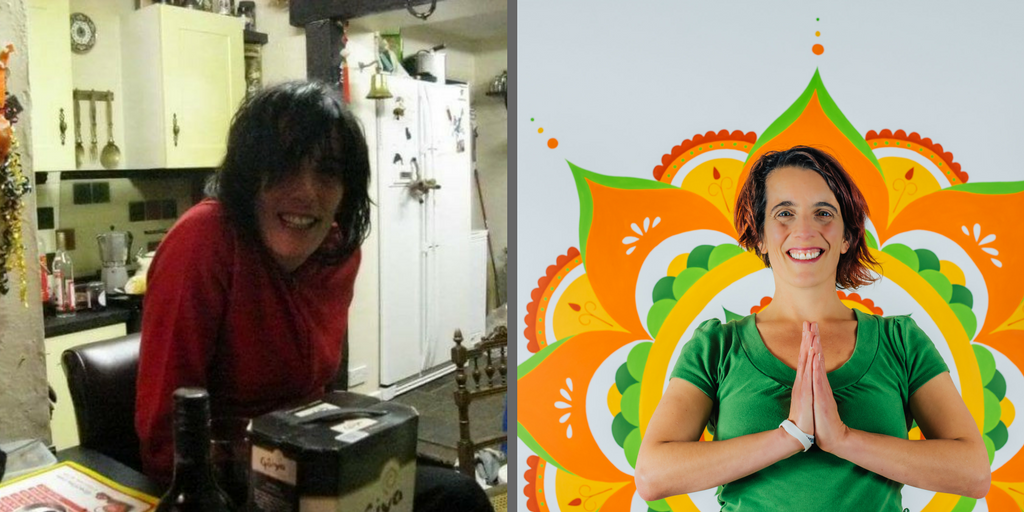 By her early 20s, the quirky girl with the funny name had fallen in love, become a mother, and suffered from heartbreak.

Along the way, she developed an indelible bond with alcohol, cigarettes, weed and rock ’n’ roll music.

At the time, her lifestyle didn’t seem all that unusual for a young adult. All her friends took drugs and drank heavily, too. In fact, many of them partied even harder than she did.

Esther equated drinking with fun. As for people who didn’t drink, well, they were just boring. “I can remember several times saying, ‘If people don’t like getting drunk, I can’t be friends,’” she recalls.

But alcohol meant far more to Esther than simply having good time. Drinking was a coping mechanism. She counted on it to drown out her anxiety and numb her emotions. “If I drank enough, I could stop feeling what I felt. Or at least I thought I wasn’t feeling what I felt,” she recalls.

But in reality, it never quite worked that way. All too often, a drunken Esther would end up in a friend’s arms, crying inconsolably, unable to make any sense out of her emotions.

For the longest time, she told herself she was fine. After all, she wasn’t drinking alone, like an alcoholic. She was doing it the company of friends. It was a social activity.

But by the time she turned 25, Esther had broken that taboo, too.

To pursue a degree in teaching, she moved 40 miles away from home, with her young son in tow, to attend the university. It was a lonely time for the single mom, and red wine became her surrogate friend.

Soon, she was drinking on an almost daily basis, and she was convinced she needed it as a lubricant to tap into her creativity.

“Every single assignment, I was drunk. I was stoned. I remember telling myself, ‘I probably shouldn’t be doing this with cider and joints,’ and I tried to write an essay straight once,” she recalls. “I couldn’t do it.”

Eventually, Esther earned her degree, moved back to the Rhondda Valley and landed a full-time job in the IT industry. Her old friends were there, too, so she didn’t have to drink alone anymore. But she did!

Stress continued to rule her life, and the next two decades were a chaotic blur as she lurched from one calamity to the next, self-medicating with alcohol.

“I kind of lived this crazy life for 20 years. All of my 20s, all of 30s were basically fueled by stress, alcohol, cigarettes, coffee, weed and rock music. That was it. Apart from my kids, that was my whole life,” she recalls.

While she didn’t drink every day, she did drink most days. And all too often, she’d drink to the point of oblivion.

Esther thought she was doing a good job of camouflaging her drinking. She’d purchase her alcohol from different stores, hoping the shopkeepers wouldn’t notice how much booze she was buying, and she hid the extent of her drinking from others.

Nobody knew how much she was actually drinking when she was alone.

She even managed to convince herself that she didn’t have a problem. She could quit any time she wanted to, she told herself. She was sober through her pregnancies, after all, and she was a good mother. She always took care of her sons.

Besides that, she had friends who drank more than she did. She’d look at them and think, ‘OK, I’m not as bad as him.’ It never dawned on her they might both be alcoholics.

Still, there were cracks in the facade. Some mornings, she’d wake up with the shakes, her body revolting from the poison that she depended on, and others had begun to notice her problem.

“People knew I drank too much when I drank with them, and there was one time that I had to go to the hospital for a blood test and they had to retest me because of the level of alcohol in my blood.”

Her relationship with her youngest son’s father had ended, and his control and emotional abuse continued long after the separation. She found out her mother had cancer. She was overwhelmed by a new job that she felt she couldn’t handle, and her faithful companions, alcohol and marijuana, no longer provided the comfort she needed.

In the grip of a breakdown, she quit her job and spent the next several months “completely going mental.” She began drinking every night, sleeping through the day, and “making a real drama out of everything.”

Then, there was a moment of clarity. Esther knew she needed to do something with her life, something that might pull her out of this abyss, so she enrolled in a training program to become a yoga instructor.

She’d first discovered yoga in 2007, shortly after her brother Richard had died. It had always given her a sense of comfort and peace. She wanted to find that serenity again.

As she threw herself into the training, unexpected things began to happen. “Within a few months of starting that yoga teacher training, I’d learned how to breathe properly. I learned how to relax — without alcohol.”

That was a revelation. “If somebody had said, ‘You do this yoga teacher training course, you’re going to be sober by the end of it,’ I wouldn’t have done it,” Esther admits.

But the breathing and meditation quieted her demons in ways that alcohol, cigarettes and drugs never could. Things that used to completely stress her out weren’t doing that anymore. Esther was healing.

As she drank less, she began noticing physical changes, too.

“I was starting to really enjoy waking up without a hangover, without feeling that exhausted, groggy, I-didn’t-sleep-well-last-night feeling,” she says. “I just really started to enjoy feeling peaceful in my mind, instead of looking for the next stress.”

One day, as she lay recovering from the worst hangover she had ever experienced, she decided she wasn’t going to do it any more.

Still, she wasn’t sure how long she’d stick to it. She was good at self-sabotage. “If I said, ‘I want to do this,’ I will find a million ways not to do it. I’m so much of a rebel. I rebel more against myself than anybody else. It’s ridiculous.”

So she just took it day by day: “I’m not going to drink today.” Six weeks later, she went to her brother’s wedding and had another revelation.

While the red wine flowed freely around her, Esther stuck to her decision not to drink.

The following day, there was no hangover, no guilt, and no shame. “I hadn’t upset my brother. I hadn’t made a fool myself. I’d just been the proud, happy, joyful big sister. It was wonderful,” Esther recalls. “That was the day when I knew I actually preferred being sober.”

Nearly four years into her sobriety, Esther says she feels better than ever.

“I like the feeling of remembering going to bed. It’s so much nicer,” she says. And she’s finally content with herself. “I learned how to be in my own company and to be with my own self, and be able to look at things I’d done in my life without hating myself on every level of my existence.”

Since becoming sober, the mother of three has also noticed a remarkable shift in her youngest son, who was just three years old when she had her breakdown. As a toddler, she recalls, he was often argumentative and “difficult,” but after she quit drinking, he blossomed into a calm, happy and cooperative child.

She realizes now it was her own behavior that was affecting him.

“I must have been absolutely terrifying to live with because he didn’t know from one minute to the next who I was going to be. I must have been quite a difficult mother to have. Now I’m a lot more easygoing. I was very unpredictable.”

While everyone’s path to sobriety is unique, Esther credits her recovery 100 percent to yoga. Yoga, she says, is about far more than chanting, holding your hands in a prayer position and doing poses. In fact, she sees a lot of similarities between yoga and 12-step programs.

Conscious breathing, she says, has changed the way she deals with stress. Now, when a situation is upsetting, she takes a few deep breaths to calm her nervous system. It might not change the situation at hand, but it does make her feel calmer.

Walking helps, too. As often as she can, she treks down to Dunraven Bay, a pebbly stretch of beach along the coastline of South Wales that she considers her “happy place.” Her youngest son, now eight, often accompanies her.

“It’s all about finding that joy. Walking gives me this real sense of ‘I’m so alive right now.’ You climb up a mountain or you go to stand on a cliff’s edge and you just feel that expansiveness, that space around you. You’ve done all that physical work to get there. I just love that.”

Her mission now, she says, is to share her stress-management strategies with others and help them find the peace she’s found.

In 2016, Esther chronicled her journey in a book titled “Bent Back into Shape: Beating Addiction Through Yoga.” She also owns and operates the website Balance and Breathe, contributes to the website Sober Mommies, and teaches yoga locally and online.

“People see [yoga] as an aid to recovery… [but] it can actually be your recovery program,” Esther says. “I’ve often said in that first seven months of my training, I had basically the equivalent of the best two or three years of therapy you could possibly wish for.”