At 35, Brittany Shelton enjoys a simple and calm life. A stay-at-home mom, Brittany fills her days with family and writing.

She tends to her blog and interacts with her 3,600 Twitter followers. She relishes the time with her husband and three sons.

But it wasn’t always this way. For nine years, Brittany struggled with alcohol and drug addiction. The substances numbed the pain of childhood trauma and sexual and domestic abuse. It was a temporary escape from the shame, anger and anxiety that haunted her.

Brittany grew up in Missouri in the 1980s. Her family’s trailer was always filled with strangers, smoke and noise. Weed trays were the norm — and so were loud, physical arguments between Brittany’s parents. Sometimes, the male visitors would touch her or caress her hair or compliment her. It made her skin crawl.

By the time she was in kindergarten, she could pour a mean rum and Coke for her grandpa. The five-year-old was also pretty sure she was the “smartest and most reliable person living within the thin walls of our home,” Brittany recalled in her autobiography, Discovering Beautiful.

“My early childhood and my experiences were dangerous, and my day-to-day [life] was unpredictable,” Brittany told Drugrehab.com in an interview. “I never knew who or what to expect, and I believe this is one of the contributing factors to my anxiety that I manage and live with today.”

At the time, Brittany’s escape mechanism was a blanket. When her parents would fight, she’d hide under the blanket, covering her ears and humming the tune to Bruce Springsteen’s “Pink Cadillac.”

The only person Brittany could depend on was her grandma. She was the one who sat with Brittany when she needed stitches and gave her pep talks. She was the one who would intervene when the fighting got out of control — scolding Brittany’s parents and encouraging them to straighten up their act. They never seemed to listen, though.

The unexpected death of her baby brother, Matthew, in 1990 compounded the family’s problems. Her grief-stricken mother withdrew from the rest of the family. Shelton recalls her mother sobbing alone in a room that had become a shrine to the baby. Other times, though, she’d become angry and throw hairbrushes at Brittany.

A New Escape: Alcohol and Pills

Brittany’s parents eventually separated. When she was a freshman in high school, she moved in with her father and stepmother. But it never felt like home.

There were rules she didn’t understand. Why did she have to use the downstairs bathroom but couldn’t use the one across from her bedroom? Why was she allowed to drink one brand of soda, but another kind was off limits?

Aside from the nonsensical rules, Brittany felt like a burden to her dad and his wife.

“Every drop of shampoo I rubbed on my head felt borrowed. Every bite of food I ate tasted too expensive for someone like me,” she wrote in her book.

Brittany coped the way she always had — by shutting down and trying to block it all out. She spent most her time alone in her bedroom, listening to music.

Then, at age 16, she drank a bottle of St. Ides malt liquor. She was smitten with the warm sensation and the way it transformed her personality. Instead of her usual reserved and distant self, she felt like the life of the party.

Soon, Brittany was binge drinking every week with friends. And from that point on, drugs and alcohol were her favorite mode of escape.

Over the next several years, Brittany would get kicked out of her dad’s house, move in with her boyfriend, and drop out of high school. By age 20, she was seeking refuge in a domestic abuse shelter with her nine-month-old son.

With her grandma’s support, Brittany eventually got her GED and enrolled in college. But she continued to drink to numb her loneliness and relieve her stress.

Then, through a series of medical challenges, she discovered her drug of choice: benzodiazepines.

Following a simple cosmetic surgery, Brittany developed a painful infection. As she endured several more surgeries, her doctor gave her oxycodone and Valium to cope with her pain, anxiety and sleeplessness.

Her dependence on benzos took hold quickly, Shelton recalled, and when her Valium prescription ran out, she was frantic. She turned to her drug dealer who promised her something “better than Valium.”

She took him up on it, and within a couple of weeks she was hooked on Xanax bars. To make matters worse, she was mixing Xanax and alcohol on a daily basis. The combination is extremely dangerous and often deadly.

“I think it would be accurate to say that I first became addicted to the process of melting away into nothingness, until I tried Xanax for the first time. That is when I became addicted to a specific drug, and that is all she wrote,” said Brittany.

Eventually, Brittany sought help for her addiction, but not until she had overdosed a few times and suffered a laundry list of losses.

“I had legal issues piled on top of me. I didn’t have anyone from my family in my corner. I had isolated myself from everything and everyone I was associated with,” she said. “I felt alone, hopeless and tired.”

Then a few people she barely knew guided her to a local 12-step meeting and everything clicked.

“From there, I was embraced, mentored and given tools to work with,” she explained.

She attended counseling, got a sponsor and, she said, “committed to something better.” Brittany was unsure of what that even looked like at that moment in time, but she knew she had to do it for her young son.

“I knew that it was time for me to either change or die. Because of him, I chose to fight like hell.”

It was a gradual process, though. First, she learned to stay sober for periods of time. Eventually, as she acquired better coping skills and tools, she was able to abstain completely from all substances.

“As problems with sleep, emotional regulation, relationships and other things popped up, I had new coping tools and techniques to use, as well as a solid support system around me to help me stay grounded, sane, and on fire for my life.”

Sobriety was just a part of the process. Feeling comfortable in her own skin and grappling with years of shame was also a struggle. “I felt like a stranger in my body and an alien in a foreign world that I felt comfortable being in, but knew I didn’t belong to.”

Every week, she says, she grew stronger — and by the end of her first year in recovery, Brittany actually felt a little bit confident and even comfortable.

An important part of her recovery was facing and processing her past. Doing that work helped her understand why she felt the need to run and hide “any time life gets scary, hard, unpredictable, or messy,” she said.

Twelve years into her sobriety, Brittany is enjoying a slower pace of life with her husband three sons — just the sort of life she’d always wanted.

“I used to wonder what it might be like to live without feeling an unseen pressure to go go go, or to move or to plan the next thing,” Brittany said. “I had a real problem resting in the present.”

She’s also been sharing her experiences publicly through her blog and book. She started her Discovering Beautiful blog as a therapeutic outlet to help her “sort through stuff” and “vent.” But it’s also become a hub of connection for other women who are feeling alone in their own struggles.

“To me, that’s an incredible and unexpected gift that can come of vulnerability, and I’m thankful for all of those women.”

Brittany wrote her book for those suffering from trauma and addiction. 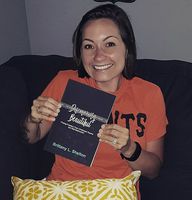 “I centered the book around some of my most major traumatic experiences and tried to show how the after-effects led me to what would become my addiction and destruction.”

She’s also unexpectedly touched a lot of people who aren’t in recovery and don’t come from dysfunction.

“These are people who have told me that my book helped them to develop empathy — not sympathy — and more of an understanding of things that they weren’t necessarily personally familiar with.”

In that way, Brittany hopes to cut through the stigma that’s all too often attached to addiction and mental illness.

“Stigma kills. We are real people. Real families. We are humans with real feelings, who matter just as much as the next person or family, who are simply trying to navigate what’s in front of us,” she says.

“Knowing that there are people who put my book down, and it causes them to start a different conversation or give to people who they used to drive past, makes me feel like I have done a tiny bit to help the cause.”