Police officers risk their lives to protect their communities. However, the pressure and stress associated with the job leads some toward substance abuse. Police departments across the country are implementing programs to help their employees avoid such problems, and treatment centers are readily available for those battling addiction.
AddictionPolice
Topics on this Page
Topics On this page
Author: Matt Gonzales | Last Updated: 2/27/20 | 24 sources

Police officers routinely find themselves amid chaos. They deal with disorderly conduct, fatal car accidents and shootings, and they are constantly exposed to violence, distress and death.

Their schedules can also be grueling. Officers often work mandatory rotating and overtime shifts, preventing them from spending enough time with their families or getting adequate rest.

Negative publicity, budget cuts and layoffs also induce stress. This anxiety can take its toll, physically and mentally, steering some officers toward a life of drug or alcohol addiction.

Why Do Police Officers Turn To Drugs?

Police officers today endure more stress than they did 30 years ago. Public scrutiny has increased while team camaraderie has faded. They worry about issues related to political correctness and cultural diversity as well as ever-changing laws.

A study published in the Journal of Occupational and Environmental Medicine asked 105 officers aged 50 or older to rate critical incidents based on the amount of distress they cause.

More than 75 percent of officers in the study replied that attending a police funeral was especially upsetting, making it the most stressful work-related incident. Nearly 50 percent replied shooting someone is stressful. Violent arrests, hostage situations and bloody crime scenes were also mentioned.

Numerous factors contribute to stress, which is conducive to substance abuse.

Dangers of the Job

Critical incidents are common in the profession. The FBI reports 51 law enforcement officers died during felonious incidents in 2014, nearly twice as many as the previous year’s total. 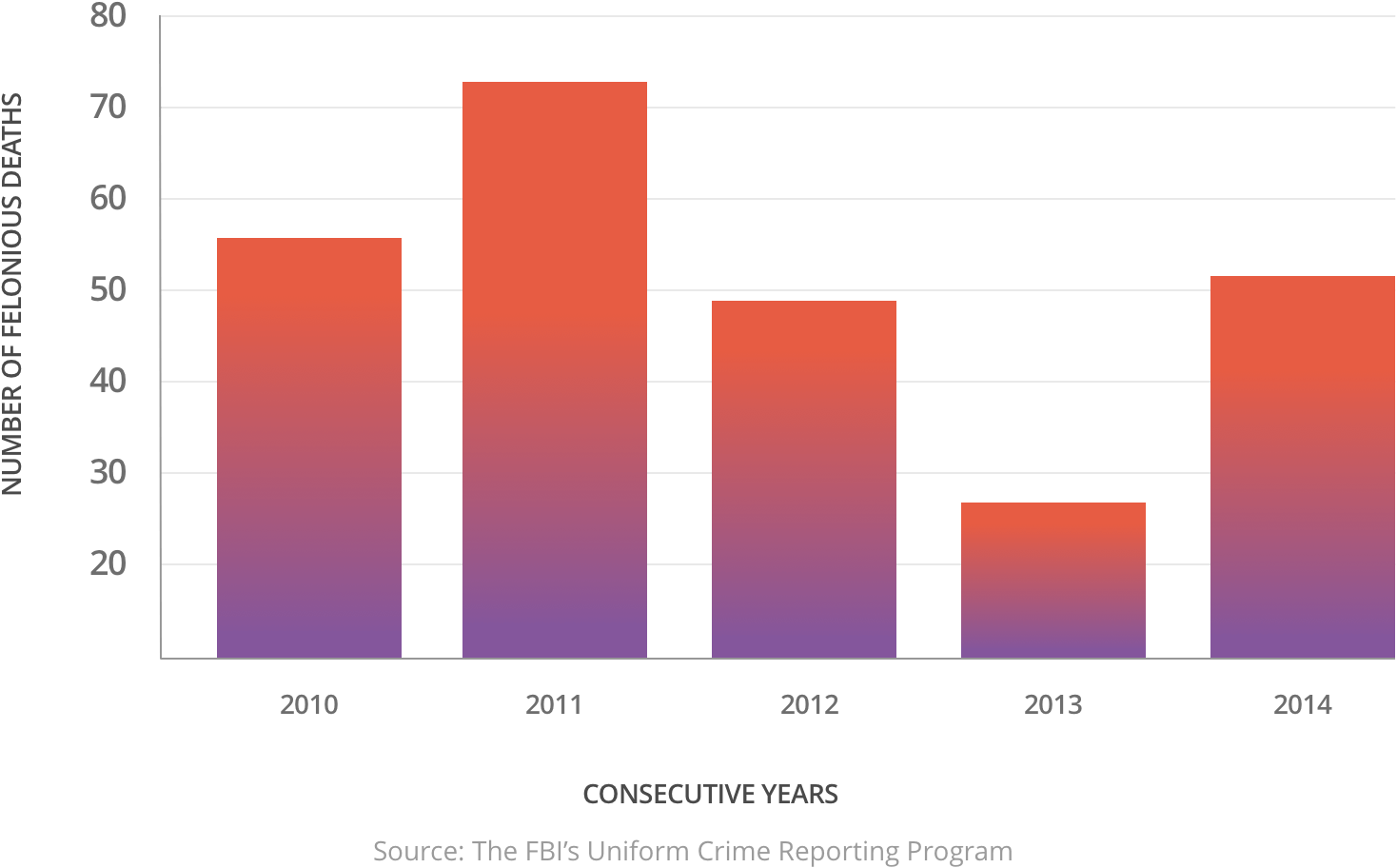 Police officers work in rotating shifts. They serve several consecutive 10- to 12-hour shifts with multiple days off afterward. These schedules do not allow for much rest during workdays.

Working a string of 12-hour shifts can cause fatigue and reduce critical thinking skills. Fatigue is responsible for numerous health problems, including anxiety and depression.

Rotating shifts give way to sleep deprivation. A study published in Occupational and Environmental Medicine found that moderate sleep deprivation can affect performance as much as excessive alcohol consumption. Similar to the effects of alcohol, fatigue can impair speech, hand-eye coordination and reaction times.

Officers with substance use disorders often work side jobs to pay for their addiction, which can worsen sleep schedules and affect their overall health.

Disturbing events, such as investigating a bloody crime scene, can impact an officer’s psyche. This can trigger post-traumatic stress disorder, a mental health condition that develops after a traumatic event.

The disorder is widely associated with military personnel. However, it can affect police officers after fatal shootings, car accidents or other traumatic events. Ron Clark, chairman of the Badge of Life Police Mental Health Foundation, estimates one in eight officers has PTSD.

“This job… takes a real toll,” San Diego Police Department Capt. Sarah Creighton told the San Diego Union-Tribune. “We respond to everyone else’s worst-case scenarios, several times a day. It has an accumulative effect on people.”

PTSD sufferers often use mind-altering substances to self-medicate. Alcohol in particular numbs the body and emotions, providing temporary relief. Up to one-third of people report drinking problems after a traumatic event or accident, per the U.S. Department of Veterans Affairs.

“This job… takes a real toll. We respond to everyone else’s worst-case scenarios, several times a day. It has an accumulative effect on people.”

Police have been under intense scrutiny by the general public in the wake of an influx of civilian shooting deaths in recent years. These fatal confrontations have led to substantial media attention and public unrest.

Many officers perceive themselves as underappreciated. They hear criticism from citizens, read it in newspapers or see it on the nightly news. This ridicule has contributed to stress.

A report published in The Journal of Law Enforcement found external factors, such as the attitude of the general public, affect officers physically and emotionally.

Source: The Journal of Law Enforcement

A report published in The Journal of Law Enforcement found external factors, such as the attitude of the general public, affect officers physically and emotionally. William Westley, a social scientist, wrote that many officers view their relationship with the general public as their most pressing problem.

“[A police officer] regards the public as his enemy, feels his occupational [responsibilities] to be in conflict with the community and regards himself to be a pariah,” Westley wrote in a study of police behavior.

Handling such criticism can be difficult. Many officers find healthy ways to combat stress, such as running or lifting weights. Others turn to drugs or alcohol.

The rigors of the job contribute to substance abuse. These drugs often include marijuana, benzodiazepines and methamphetamine. However, the most popular drugs of abuse are alcohol and opioids.

Alcohol consumption is common among law enforcement officers. They consume alcohol to relax, socialize or alleviate a physical pain or traumatizing memory. This often leads to alcoholism.

Police officers consume alcohol at a rate double that of the general population, according to a report by The Journal of Law Enforcement. In addition, 15 percent of officers who attempted suicide had a history of alcohol abuse.

Alcohol consumption can disrupt sleeping patterns and lead to an unproductive workday. This comes in addition to other alcohol-related consequences, including health problems and strained relationships.

For years, alcohol was the most abused substance among police. Today, it is painkillers.

Police officers hurt on the job are often prescribed pain medications. Tim Sparr, a former officer with the Kingman Police Department in Arizona, was fired in 2009 after driving under the influence of a drug. He was addicted to oxycodone.

“The medication pretty much took control of my life,” he told The Kingman Daily Miner.

Athletes use steroids to gain a competitive edge. Police officers use the drugs to gain an advantage of their own.

Many street officers find themselves vulnerable to bigger, stronger suspects. If a suspect resists arrest, a smaller officer may have difficulty apprehending them. Some officers turn to steroids to gain an advantage in these situations.

Steroid use among law enforcement officers has become popular. Gene Sanders, a Spokane, Washington, police psychologist, believes up to 25 percent of law enforcement personnel in urban settings use anabolic steroids.

While steroids may help police officers build muscles and achieve a more intimidating appearance, these drugs compromise their health. Steroid use has been linked to high blood pressure, cardiovascular problems and aggressive behavior.

Signs and Symptoms of Drug of Alcohol Abuse

Officers struggling with addiction may show signs of substance abuse, including:

Officers with substance use disorders may also show signs of withdrawal. These are debilitating symptoms that can lead to a host of consequences.

Signs of withdrawal vary by substance, though most symptoms include:

Officers should never deal with these symptoms on their own. This could worsen their health and lead to seizure, coma or death. It is important to seek immediate medical assistance during withdrawal.

Years ago, police culture did not acknowledge the adverse effects of stress on officers. Law enforcement agencies take these issues more seriously today. Some departments have created support programs to help officers overcome substance use disorders.

The initiative includes a captain and four officers who specialize in handling personal problems. The program is available to all officers.

Since 2011, about one-third of the department has used the program. It has helped officers deal with everything from domestic disputes to DUIs. Bill Lansdowne, former San Diego chief of police, says all police departments should help their officers manage stress.

Law enforcement officers battling substance use disorders have numerous resources at their disposal, and treatment is often the most effective option.

Officers are often reluctant to seek help for fear of disciplinary action. Consequently, they continue drinking or using drugs, worsening their situations.