If alcohol was standing in the way of your dreams, would you let it take over your life? Susan Broderick didn’t, and now she’s living proof of the power of positivity and seeing every challenge as an opportunity during her long-term recovery.

Ever since Susan Broderick was a littin le girl, she dreamed of moving to the District of Columbia to become a lawyer and work in government. Her paternal grandmother, a single mom of three children with a passion for politics and community organizing, was her inspiration.

“I still have a Polaroid photo my grandmother took of John F. Kennedy at the Democratic National Convention in 1960,” said Broderick. “She always told me that I could do whatever I set my mind to.”

“Alcohol was always a part of my life starting from when I was a child. I’m from an Irish-Catholic family. We have alcoholics all through our family tree.”

Susan eventually did make her dream a reality; she’s now the director of the National Juvenile Justice Prosecution Center at Georgetown University. But alcohol almost derailed her goals.

“Alcohol was always a part of my life starting from when I was a child,” said Broderick. “I’m from an Irish-Catholic family. We have alcoholics all through our family tree.”

Broderick’s father and mother both had problems with alcoholism. “When [my father] drank, he got drunk. There was no in between,” she said. Broderick was so against her parents’ drinking and smoking that she used to cut out the surgeon general’s warnings about smoking and post them all over the house.

Susan (right) with her brother as a child.

Getting an Early Start

As Broderick grew older, she picked up drinking on her own. “You would think I would have hated alcohol. But when I hit eighth grade, it was all about being cool and hanging out with the cool kids. So I started to drink. I drank a lot from that time forward.”

Her nickname in high school was the Sponge. “At the time, I just thought I was fun. I was a good partier,” she said.

From that point until her recovery began in 2001, alcohol took the wheel.

When I got to college, the drinking continued,” said Broderick. Being away from home just multiplied the consequences. Broderick looks back at college as a time when her drinking problem could have been mitigated and wouldn’t have had such an effect on her life. When she went to law school, the binge drinking turned into daily drinking as a way to decompress from the rigors of studying.

After graduation from law school, she got a job with the Manhattan District Attorney’s Office. It was a ‘work hard, play hard’ environment,” she said, “and I could do both really well.” Broderick found herself associating with colleagues who drank like she did — every day after work. It was easy to find them, she said, “because we were always at the bar.”

Broderick’s self-awareness, usually a positive trait, was her downfall.

“I just resigned myself to this life. I figured, ‘I’m a drinker. This is just who I am. This is what I do.'” It became her sense of identity. Broderick knew for a long time that she had a problem with alcohol, but she just decided that she was destined for a life where alcohol played a major role. 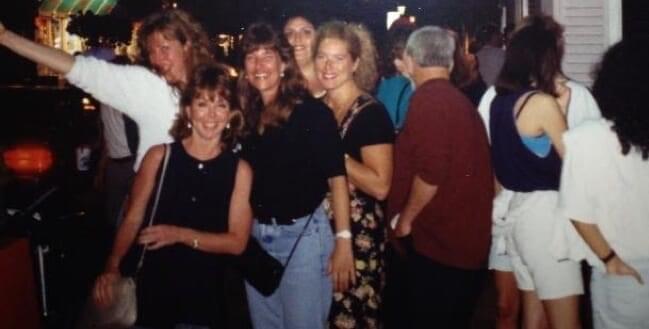 With friends, Susan (second from left) parties in Key West in 1993.

It just got worse. “There were many points that should have been my bottom but weren’t, she said. Her friends and colleagues started getting married and settling down, so Broderick started drinking at home after work.

In December 2000, she went to a party and blacked out. “I woke up the next morning not knowing how I got home. It was only through piecing the night together with a friend that I figured it out,” said Broderick.

That was the signal to her that she should consider moderating. However, she soon realized moderation wasn’t an option. She went to a New Year’s Eve party and had only two drinks. According to Broderick, “It was the worst thing an alcoholic could do. Introduce a little bit of alcohol into the body, and then stop. All you do is crave it.”

“I woke up the next morning not knowing how I got home. It was only through piecing the night together with a friend that I figured it out.”

In January 2001, she was getting ready to go to a colleague’s wedding. “There were going to be very important people there. Judges, people who had helped me in my career. It was important that I behave. I remember standing in the shower and being petrified.”

She knew that as soon as she had a few glasses of wine at the cocktail hour, it would all go downhill. It did.

The day after the wedding, Broderick received an email from a woman who had been her mentor at the district attorney’s office, and who was now a judge. “The email said, ‘I think you have a problem with alcohol.’ That was when I knew the secret was out.” But Broderick continued drinking.

In the meantime, her father and mother had stopped drinking, gotten sober, retired and moved to North Carolina. “Our relationship really solidified after that,” she said. “One day, my father and I were watching TV, and he just turned to me and said, You’ve got to stop drinking. No one in our family should drink.’ It floored me. I felt like he knew my secret, too.”

Broderick’s drinking escalated further by July 2001, when she went to the District of Columbia for a conference. “There I was, in the city I dreamed about, and all I could think about was getting back to my hotel room so I could have my cigarettes and chardonnay,” she says. That was on July 14, her father’s birthday. 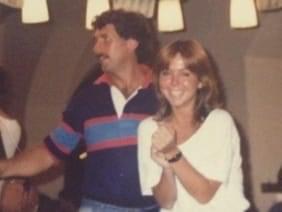 When she got home, she got very drunk and called an old boyfriend, a firefighter she hadn’t seen in three years. “Because that’s what I did when I got drunk — called old boyfriends,” said Susan. He came over, and Broderick was a mess. She was crying, saying, “I have a problem. I need help.”

In the morning, he said, “I’ll call you later.”

“I thought to myself, ‘He’s not going to call me later. They never call me later.'” But he did call, and it was the impetus for Broderick’s recovery.

“He said, ‘What the hell happened to you? You were a mess last night.’ I was crushed,” she said. “That day, I made the decision to stop and went to my first 12-step meeting. As soon as I said, ‘I’m Susan, and I’m an alcoholic,’ I felt a huge rush of relief.”

“I didn’t think I could live without alcohol, but yet here were these people, and they were so happy being sober.”

After the meeting, several women came up to her and embraced her. “Your next step: 90 meetings in 90 days,” they said.

Broderick immediately called her father after the meeting in tears. “He said to me, ‘You never have to get me another birthday present for the rest of my life.'”

During those 90 days, her father called every day to support her efforts to get and stay sober. The biggest thing Broderick realized was that the people she was associating with at meetings were happy.

“I didn’t think I could live without alcohol, but yet here were these people, and they were so happy being sober.” 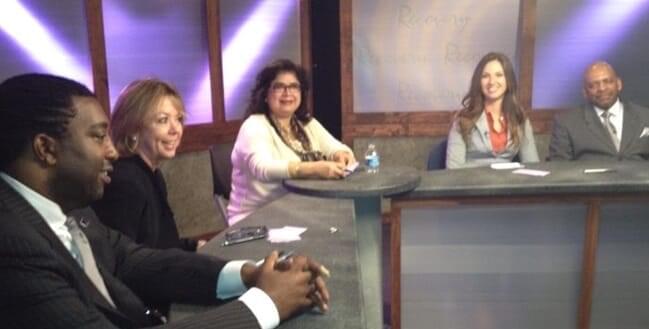 On the set of SAMHSA’S Road to Recovery series in 2015.

Broderick hasn’t had a drink since that first meeting in 2001, but that doesn’t mean recovery has been an easy road — quite the opposite.

A series of events beginning on Sept. 11, 2001, and continuing through the past few years has made Broderick’s recovery a rocky one, but her perspective remains long-term.

Just 57 days into her recovery, the events of Sept. 11 left her devastated. She remembers being on the rooftop of her building in Brooklyn looking toward lower Manhattan as the towers were on fire. It was surreal — white smoke, papers in the air.

“I remember looking up to the sky and thinking, ‘God, you lost me. You had me for 57 days, and now you lost me.’ Behind her, a woman from her meetings approached. A meeting was scheduled that night. Broderick went to the meeting and didn’t take a drink.

Her father was diagnosed with emphysema, and he died on Nov. 13, 2005. “If I hadn’t been sober, I wouldn’t have been there with him when he died. I would have been drinking.”

At the same time, her mother was diagnosed with breast cancer, and since Broderick was sober, she was able to help take care of her mother during her illness. A man she had been dating, who was also in recovery, also died from bladder cancer.

Broderick herself was diagnosed with breast cancer twice, and both times she was misdiagnosed at first and questioned her doctors’ findings. “I wanted to know for sure, and I knew they were wrong, and they were.” 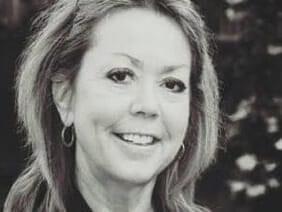 She ended up having a difficult treatment as well as a double mastectomy and reconstruction, during which her body kept rejecting the new breast tissues.

Through it all, Broderick’s positive outlook has been her greatest strength. “As soon as I found out about my recurrence of breast cancer, I called my sponsor,” she said. “You think that getting sober means ‘happily ever after,’ but it doesn’t.”

To Broderick, it’s all about perspective. “Because I was sober, I was able to save my own life — twice — because I had the mental capacity to challenge what my doctors had said,” she said. “I feel like adversity happens to everyone. We’re all going to go through something that is hard. It’s important to focus on resilience. There’s great potential for good things to come out of very difficult situations.”

“It’s important to focus on resilience. There’s great potential for good things to come out of very difficult situations.”

Since starting her long-term recovery, Susan Broderick realized her dream of moving to the District of Columbia and working as a juvenile justice policy advocate and public speaker.

She currently heads research at Georgetown University’s National Juvenile Justice Prosecution Center, working with drug- and alcohol-related crimes and developing training for prosecutors to provide an opportunity for young offenders to change their lives. 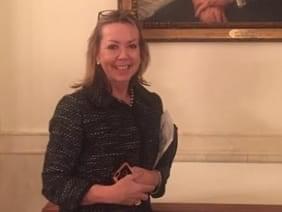 “Drug courts are not the end-all, be-all in the justice system,” she says. “There are a lot of things we should be doing, especially with young people, for diversion and prevention and early intervention. So much of adolescence is doing stupid things and experimenting. Diversion and intervention can be used as ways to keep kids away from drugs in the first place.”

Broderick’s recovery has left her with a unique perspective on addiction and how the justice system can help prevent and treat addiction in the future.

Holly Kapherr, Author, DrugRehab.com
Holly V. Kapherr is a professional editor and writer. She started her career in 2007 and has served as an editor for several national print magazines and websites. For ten years, she has specialized in culinary, travel, lifestyle, family and health reporting and feature writing. Her work has been published in the New York Post, Watermark, Parenting and others.
[email protected]