Many popular drugs today, including legal prescription drugs such as Klonopin or Xanax and illegal substances such as heroin and marijuana, have code names. Knowing the slang terms for these drugs may help you determine if a loved one is using drugs, which may prevent them from developing or exacerbating addiction.
AddictionDrugsStreet Names
Topics on this Page
Topics On this page
Author: Matt Gonzales | Last Updated: 2/28/20 | 28 sources 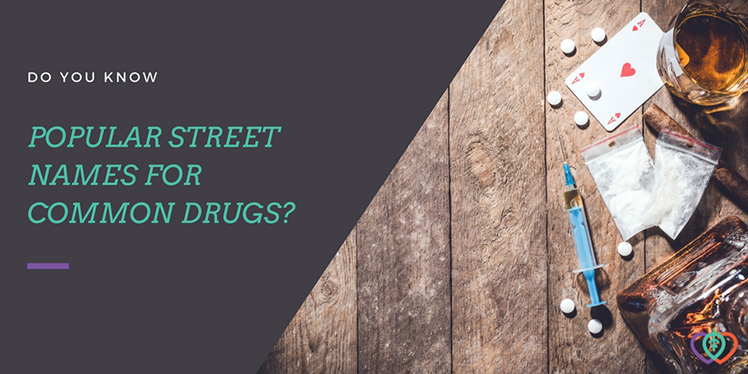 People suffering from addiction often harbor secrets to hide their disease from loved ones. In fact, many people with substance abuse problems commonly use special terms when discussing drug use.

A number of drugs, from crack cocaine to prescription opioids, have street names. Using these code words allows individuals, including teens, to hide drug use from parents, teachers and police officers.

People who use street names for drugs can discreetly talk about substance use without having to worry about legal consequences. However, concealing substance abuse can exacerbate addiction and delay treatment.

Hundreds of street names exist for drugs, and some names are more common than others. While many people know that “weed” is a slang term for marijuana, they may not know that “wrecking crew” and “devil smoke” are street names of crack cocaine. In some cases, people create their own code names for drugs.

Barbiturates are a group of drugs that depress the central nervous system. Available in pills or tablets, these drugs can relieve anxiety and cause sleepiness. However, barbiturates can impair memory, judgement and coordination.

Street names for barbiturates include:

Barbiturates can cause overdose and lead to addiction. Withdrawal symptoms, which occur after suddenly ceasing barbiturate use, include insomnia, restlessness and anxiety.

Benzodiazepines are a class of drugs used to treat anxiety and depression. But these substances can cause slurred speech, restlessness and hallucinations. Over time, benzodiazepine users can develop a physical or psychological dependence to the drugs.

Street names for benzodiazepines include:

Ecstasy, also called MDMA, is a psychoactive drug that can produce intense euphoric effects. Popular among young people in party environments, the drug can increase body temperature and lead to numerous consequences, including confusion, anxiety and heart failure.

Street names for ecstasy include:

Ecstasy users feel the effects of the drug about 20 to 40 minutes after consumption. Sixty to 90 minutes later, peak effects occur. These effects may last up to six hours. Ecstasy causes a serotonin levels to drop in the brain, which may make people feel drained for up to two days after consuming the drug.

GHB is a depressant that treats narcolepsy, a sleep disorder that causes daytime drowsiness. The substance can reduce anxiety, but it can lead to aggressive behavior, slowed heart rate or coma. It is sometimes used as a date-rape drug.

Street names for GHB include:

When used over an extended period of time, GHB can lead to increased tolerance and dependence. People who are dependent on GHB can experience physical and psychological withdrawal symptoms when they stop taking it. Severe withdrawal symptoms can occur in individuals who frequently use the drug in high amounts for long periods of time.

Street names for hallucinogens and dissociative drugs include:

Use of hallucinogenic and dissociative drugs began for religious purposes. But over time, people began using these drugs for recreational purposes. Many people turn to drugs such as LSD and peyote to relieve stress. However, LSD is a Schedule I drug, which means it has high potential for abuse.

Heroin is a highly addictive opioid that is illegal to possess in the United States. Made from natural substances in certain poppy plants, the drug is often sold as a white or brownish powder that can be mixed with other substances. Heroin use can cause collapsed veins from injection, slowed breathing and liver or kidney disease.

Street names for heroin include:

Heroin is banned in the United States, but the drug continues to be abused at high rates. According to the National Institute on Drug Abuse, more than 15,400 Americans died from a heroin overdose in 2016. Heroin has contributed to the opioid epidemic in the United States.

Inhalants include aerosols, solvents and gases found in home products such as glues, spray pains and cleaning fluids. Using these substances can result in dizziness, lightheadedness, choking, suffocation or death from asphyxiation.

Street names for inhalants include:

Dr. Kevin Wandler, chief medical officer for Advanced Recovery Systems, told DrugRehab.com that research on treating inhalant abuse is lacking. But he noted that addressing co-occurring disorders, such as depression or anxiety, can help people who are dependent on inhalants.

Khat leaves can be chewed for euphoric purposes. In areas around the world, the substance is used to treat obesity and prevent hunger. However, its use can lead to dysphoria and sedation. Khat is banned in the United States, Switzerland, Sweden and France.

Street names for khat include:

While Khat use does not cause physical addiction, people who frequently use the drug can develop a psychological dependence to it. Khat can lead to withdrawal symptoms, including nightmares, mild depression and slight tremor.

Klonopin is a benzodiazepine that can treat anxiety disorder and control certain types of seizures. Since 1975, the drug has been used to help treat people with epilepsy. Although rare, side effects of the drug include difficulty walking, memory problems and depression.

Street names for Klonopin include:

Klonopin use can affect pregnancy. Using the drug during pregnancy may result in fetal abnormalities. Additionally, mothers who use the drug should avoid breastfeeding their infants.

Derived from a tree indigenous to Thailand, kratom is a drug that can relieve pain and cause mood-lifting effects. The drug has been linked to insomnia, weight loss and anorexia. In October 2016, the Drug Enforcement Administration reversed its decision to ban the substance in the United States.

Street names for kratom include:

Marijuana, a drug made from the flower of the cannabis plant, is a mind-altering substance that produces euphoric effects. The most commonly used illicit drug in the United States, marijuana can lead to slowed reaction time, increased heart rate, anxiety and hallucinations.

Street names for marijuana include:

Marijuana can cause addiction. Research shows that between 9 and 30 percent of marijuana users may develop some level of marijuana use disorder, according to the National Institute on Drug Abuse. People who use cannabis prior to age 18 are four to seven times more likely than adults to develop a substance use disorder involving marijuana.

Experience the journeys of real people who have overcome addiction on their path to happiness.

Prescription opioids are painkillers that can cause euphoria. They are often used in a medical setting to relieve pain after surgery, after serious sports injuries or during cancer treatment. They can also be used to treat chronic pain. But this class of drugs includes medications that can result in addiction.

Street names for opioids include:

Prescription opioids play a major role in the opioid epidemic. These drugs can be highly addictive, and they have caused thousands of overdoses and deaths in recent years. States most affected by the epidemic include West Virginia, Ohio and Kentucky.

Dextromethorphan and Other Over-the-Counter Cough and Cold Medicines

Some over-the-counter cough and cold medications can be psychoactive when misused. These medicines include dextromethorphan and cough syrups containing promethazine and codeine.

Street names for over-the-counter cough and cold medicines include:

Many young people and high-profile rappers mix prescription cough medicine with soda or candy to produce “lean.” Also known as “sizzurp,” this concoction can cause feelings of euphoria. But it can depress the central nervous and respiratory systems, leading to heart and lung problems.

Flunitrazepam, also known as Rohypnol, is a benzodiazepine that is chemically similar to Valium and Xanax. Many young people misuse Rohypnol in party environments. Because of its sedative properties, the drug has been used to incapacitate people and commit sexual assaults.

Street names for Rohypnol include:

Rohypnol is a Schedule IV substance, which means it can lead to physical dependence. Withdrawal symptoms associated with Rohypnol include restlessness, convulsions, hallucinations, anxiety and tremors.

Sleep medications are sold over the counter or prescribed by a physician. Prescription sleep medications, called hypnotics, help people fall asleep more quickly. These medications include Ambien, Sonata and Lunesta.

Street names for sleep medications include:

Anabolic steroids are man-made substances that people often abuse to enhance their physical appearance, athletic ability or sexual performance. The drug can also help people recover from intense workouts. But using these drugs can lead to fluid retention, aggression and kidney failure.

Street names for steroids include:

Steroids can cause withdrawal symptoms associated with addiction. People can develop a tolerance for or dependence to anabolic steroids, but no strong evidence exists showing that the drugs can lead to addiction.

Stimulants are drugs that increase blood pressure, attention, alertness, heart rate and energy. These substances include illicit drugs such as cocaine and prescription medications such as amphetamine. Using these drugs can lead to heart problems, paranoia and infectious diseases.

Street names for stimulants include:

Cocaine, a popular illicit stimulant, has caused countless deaths in the United States. In 2016, more than 10,600 Americans died of cocaine overdose. Crack cocaine, a form of cocaine that can be smoked, caused a public health crisis in the 1980s.

Street names for synthetic cannabinoids include:

In recent years, K2 use has become popular in the United States. The drug causes an intense high, but it can also lead to seizures, heart attacks and suicide. It can also cause violent behavior and psychosis.

Synthetic cathinones contain man-made chemicals related to cathinone, a stimulant found in the plant khat. Side effects of synthetic cathinones include increased blood pressure, hallucinations and psychotic behavior. These drugs have no commercial use in the United States.

Street names for synthetic cathinones include:

Synthetic cathinones are addictive. People who use these drugs report that they develop strong cravings or urges to use them again. These substances have also been linked to intense withdrawal symptoms, including anxiety and depression.

Xanax is a sedative prescription drug that can cause muscle relaxation and reduce anxiety. This drug can result in dizziness, confusion, slurred speech and insomnia. Frequent or prolonged use of Xanax can lead to dependence or addiction.

Street names for Xanax include:

Xanax can cause dependence. Xanax withdrawal symptoms can occur within 12 hours of last use, and the symptoms peak within three to four days. Withdrawing from Xanax can lead to seizures or death.

Why Is it Important to Know Street Names for Drugs?

Learning street names of common drugs has numerous benefits. It can help parents recognize drug use among their children. It can help teachers identify students who are engaging in substance abuse. And it can help law enforcement understand drug trends in the community.

Knowing street names for various drugs can help people identify substance abuse. It can alleviate teen substance abuse and drug crimes in the United States. This information can also help parents learn more about the dangers of these drugs and steer their adolescent toward professional treatment.

Matt Gonzales, Content Writer, DrugRehab.com
Matt Gonzales is a writer and researcher for DrugRehab.com. He graduated with a degree in journalism from East Carolina University and began his professional writing career in 2011. Matt covers the latest drug trends and shares inspirational stories of people who have overcome addiction. Certified by the Centers for Disease Control and Prevention in health literacy, Matt leverages his experience in addiction research to provide hope to those struggling with substance use disorders.
[email protected]
@bymattjgonzales