For decades, people have used codeine to treat numerous ailments, including pain, cough and diarrhea. When used properly, the drug provides relief from a variety of symptoms. But the drug has addictive properties that can cause dependence or addiction. Luckily, treatment can help people with codeine dependence overcome drug abuse.
AddictionPrescription DrugsOpioidsCodeine
Topics on this Page
Topics On this page
Author: Matt Gonzales | Last Updated: 2/27/20 | 24 sources

Codeine is an opioid used to reduce coughing or treat mild to moderately severe pain. The drug often is combined with other ingredients, such as acetaminophen, and comes in the form of a tablet, a capsule and a liquid solution.

The opioid has been included in many drugs that target pain, which has resulted in its widespread use. It also has been added to many cancer and HIV medications. However, codeine can be harmful when mixed with other substances, such as alcohol.

Codeine abuse can lead to a physical dependence or addiction. People with substance use disorders experience compulsive drug use despite the negative consequences. This brain disease can result in long-term damage that can be fatal. 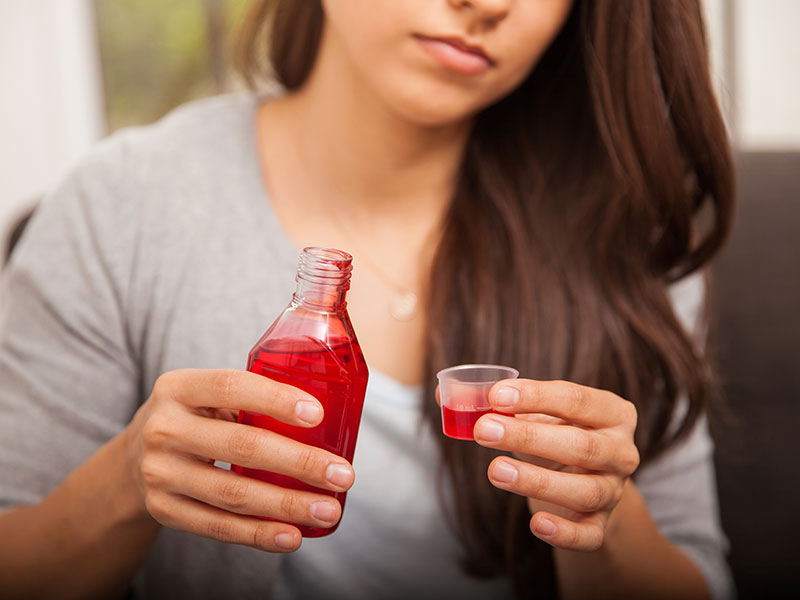 The Drug Enforcement Administration classifies codeine as a Schedule II drug, meaning that it has a high potential for abuse and its use could cause psychological or physical dependence. Products containing 90 milligrams of codeine per dosage unit or less, such as Tylenol with Codeine, are considered by the DEA as Schedule III substances, which have a slightly lower abuse potential than Schedule II drugs.

A report published in the journal Addiction examined the abuse of codeine-containing cough syrups in India. Researchers surveyed people at an addiction clinic and found that all participants with a codeine-based dependency were male, primarily young and from urban backgrounds.

The study also found that 63 percent of people with a codeine dependency reported initially using this substance to ease curiosities. Ninety-two percent of those dependent to codeine experienced withdrawal symptoms.

Another survey, published in the journal Drug Safety, investigated the misuse and abuse of drugs, including codeine, for self-medication among community pharmacy clients in France. More than 15 percent of participants who used codeine-based products in the last month misused them. Abuse of these products occurred in 7.5 percent of patients, and 7.5 percent were dependent on codeine.

Statistics associated with codeine use in the United States are not well known. However, the latest Monitoring the Future study, which surveys eighth-, 10th- and 12th-graders about their drug and alcohol use, found that 43.6 percent of surveyed high school seniors perceived trying narcotics other than heroin, including codeine, once or twice to be harmful.

Many people addicted to codeine use street names for the drug to hide their substance abuse. They may use slang when talking with dealers or others who may have access to the drug.

Street names for codeine include:

Using these code words may allow people to conceal their addiction from loved ones. However, hiding codeine abuse can exacerbate addiction and lead to other long-term health problems.

Ready to Make a Change?Get help with your Codeine addiction today! Get Help Now

How Codeine Affects the Body

Codeine changes the way someone experiences pain by attaching to specific opioid receptors in the brain, spinal cord and gastrointestinal tract. It impacts areas in the brain that affect the way people perceive pleasure and pain.

The opioid blocks the pain signals sent from the brain to affected parts of the body. The drug influences the central nervous system to suppress these signals, which causes less pain to be felt. However, the source of pain still exists.

“Codeine is almost identical to morphine,” Dr. Chris Johnson, an emergency room physician, told DrugRehab.com. “In most people, about 70 percent of humans, codeine is converted into morphine in the body. So when somebody is taking codeine, they’re taking morphine. The body just makes it into morphine.”

How Long Do Codeine and Promethazine Stay in Your System?

Codeine is absorbed by the gastrointestinal tract and transferred to different body tissues. The drug is metabolized by the liver, and its metabolic elements are discharged by the kidneys. It is converted into morphine and then becomes norcodeine, a derivative of codeine.

Promethazine, a medication commonly combined with codeine in medicated syrups, has a half-life of 16 to 19 hours. A drug’s half-life is the time it takes for the concentration of a drug in the body to be reduced by one-half. Promethazine typically is eliminated from the system in three to four days.

Promethazine-codeine cough syrup is a common medication used to suppress coughing. But it can also produce relaxation and euphoria when misused.

A growing trend in recent years has been consuming sizzurp, a candy-flavored drink that includes codeine prescription cough syrup, soda and sometimes a Jolly Rancher candy. Also known as “lean” or “purple drink,” sizzurp gained nationwide popularity more than a decade ago after numerous hip hop musicians referenced the concoction in their songs.

“A popular one is Phenergan and codeine, also called purple drink,” Johnson said. He emphasized that codeine-based cough syrups are just as dangerous as other opioids and that misusing them can cause dangerous side effects.

“Only prescription cough syrups have codeine,” Johnson said. “It’s a controlled drug. You can’t buy codeine over the counter.”

Phenergan is a brand name for promethazine, a sedative drug used to treat motion sickness and nausea. These sedative elements are used to keep people from consuming too much of the concoction.

Consuming too much of the product can cause dizziness, memory loss and hallucinations. It can also suppress the central nervous and respiratory systems. In 2013, rapper Lil Wayne reportedly endured seizures after consuming purple drink.

Slowed Heart Rate, Depression and Other Effects of Codeine

Codeine use can lead to several side effects, some more common than others. But some consequences of using this opioid can be physically and psychologically damaging, affecting many facets of life.

Physical Side Effects of Codeine

People who use codeine may experience lightheadedness, shortness of breath or vomiting.

Other common side effects include:

Other severe side effects may include:

Withdrawal symptoms associated with codeine use include:

Codeine abuse can depress the central nervous system, slowing or stopping the heart and lungs. This could lead to overdose or death. Mixing the drug with alcohol could worsen side effects and increase the risk of death.

Some children who took codeine to reduce pain after surgery to remove their tonsils or adenoids died after treatment — even upon consuming recommended amounts of the drug. In August 2012, the Food and Drug Administration warned the public that codeine use could be fatal in children whose liver converts codeine to morphine in higher-than-normal amounts.

It is not known whether codeine harms a prenatal child. However, opioid use during pregnancy can lead to life-threatening withdrawal symptoms in newborns. Babies born dependent on drugs, a disorder known as neonatal abstinence syndrome, often receive intensive treatment for weeks.

In 2010, Turning Point Alcohol and Drug Centre conducted a study designed to better understand dependence to over-the-counter codeine in Australia. Researchers recognized a relationship between codeine use and symptoms of a co-occurring disorder, suggesting that people dependent on codeine may have been using the drug to cope with their emotions.

“I suffered post-natal depression after my first child and … I kept taking the codeine to try and make myself, well, to try and feel better mentally,” a 38-year-old woman told researchers.

A study published in the Journal of Clinical Psychopharmacology found that long-term codeine use was related to depressive symptoms. In fact, 70 percent of codeine-dependent respondents with mental health problems sought help for depression.

“These data suggest that dysphoric mood states may be significant in maintaining long-term codeine use,” the study’s authors concluded.

Another study published in the Journal of Clinical Psychopharmacology found that many codeine users experienced a mental health condition related to their codeine use: 21 percent of participants dealt with anxiety, and 23 percent grappled with depression.

Pharmacotherapy, Detox and Other Treatment Approaches to Codeine Dependence

People prescribed codeine should avoid misusing the drug, which includes taking more than recommended by a health care professional. Consuming codeine for long periods of time also can result in dependence.

Individuals dependent on codeine should seek help immediately, but many do not. The Turning Point Alcohol and Drug Centre study found that 74 percent of surveyed people dependent on over-the-counter codeine had not sought assistance for their dependence.

Once a dependence to codeine develops, the brain cannot function normally without it. Codeine-dependent people who abruptly quit the drug can experience severe withdrawal symptoms.

The report identified barriers to treatment. It found that many OTC codeine-dependent people appeared reluctant to try evidence-based treatments because of the stigma associated with rehab. Researchers also found that these individuals were not attracted to current rehab services, and many were unaware they were dependent to the drug.

Many participants in the study were encouraged to seek help by concerned family members, partners, coworkers or a health care professional. Some individuals sought rehab realizing the inconvenience of pharmacy shopping.

Buprenorphine, Methadone and Other Pharmacotherapy Options for Codeine Dependence

Buprenorphine creates opioid-like euphoric effects, but it can reduce an individual’s risk of codeine-related side effects, misuse and dependence. The medication often is used to treat withdrawal symptoms.

The Turning Point Alcohol and Drug Centre study also identified common approaches to treatment for those dependent to codeine. In addition to pharmacotherapy, inpatient detoxification was also a popular treatment approach. Detox, the first step of the treatment process, involves clearing toxins from a person’s system.

In the study, one addiction specialist described using a mixture of medications and psychological support to help people overcome codeine dependence. The specialist said that Suboxone, which contains buprenorphine and naloxone, was particularly helpful to patients.

Many rehab centers address codeine addiction by catering to the individual’s specific needs. These treatment centers often use evidence-based techniques to help people overcome their substance use disorder.