Spice and K2 are street names for synthetic marijuana, a mind-altering drug that is much more potent and harmful than pot. Fake weed can trigger severe anxiety, psychosis, seizures and even death. Spice is addictive and can cause unpleasant withdrawal symptoms.
AddictionDrugsSpice & K2
Topics on this Page
Topics On this page
Author: Amy Keller, RN, BSN | Last Updated: 2/27/20 | 30 sources

When Spice and K2 first hit the market in the early to mid-2000s, many people assumed the substances were a safe, natural and legal alternative to marijuana.

Then people started showing up in emergency rooms, and horror stories about their reactions to synthetic marijuana began airing on the nightly news.

Synthetic marijuana is very different from cannabis. Depending on its chemical components, it can be anywhere from four to 50 times more potent than weed. The drug is addictive, dangerous and unpredictable.

People who use Spice or K2 can develop extreme anxiety and agitation, intense hallucinations and violent behaviors. The drugs can cause an array other physical effects, ranging from nausea and vomiting to bleeding, severe organ damage and even death.

What Is Synthetic Weed?

Spice and K2 belong to a group of drugs known as synthetic cannabinoids. The products don’t actually contain marijuana. They can be made with a wide range of man-made chemicals engineered to mimic the effects of THC, the main psychoactive ingredient in pot.

Synthetic cannabinoid products act on the same brain receptors that THC does, but fake weed is much more powerful than marijuana and can cause extreme mental and physical reactions.

Spice and other forms of synthetic pot are sprayed or sprinkled onto dried blends of plants or herbs and smoked. Spice looks like marijuana, herbal tobacco or potpourri. Synthetic pot also comes in a liquid form that can be vaped. 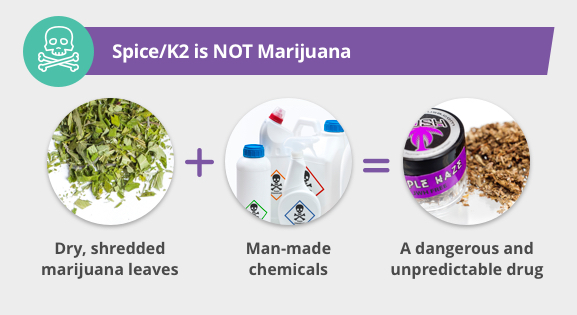 Spice and K2 are two early brand names that have become common nicknames for synthetic marijuana, but there are now hundreds of brand names of fake pot.

To avoid scrutiny by law enforcement, synthetic weed is often misleadingly marketed as herbal incense or potpourri. The packaging typically states the product is not for human consumption.

Synthetic marijuana is addictive, and people who regularly use the drug may experience withdrawal symptoms when they suddenly stopping using it.

Common withdrawal symptoms are similar to those associated with marijuana addiction, including headache, depression, anxiety and irritability. It is, however, important to understand that Spice and marijuana are completely different drugs. People who are addicted to Spice may also experience drug cravings, sweating, heart palpitations, elevated blood pressure, insomnia and nightmares.

The way synthetic marijuana interacts with brain cells might account for why it’s so addictive. Research indicates that some versions of the drug bind to the brain’s cannabinoid receptors 100 times more tightly than the THC in marijuana does.

Many teens who become addicted to Spice experience vivid hallucinations and suicidal thoughts. The addictiveness of synthetic marijuana and the intensity of its effects have caused some people to compare it to crack and meth.

These three drugs all have an inconsistent quality, and people who regularly use them often develop addictive behaviors.

Although synthetic marijuana was outlawed in 2011, fake weed is still turning up on the streets, in convenience stores and online.

The drug’s low cost and easy accessibility — as well as the fact that most standard drug tests don’t screen for it — have made synthetic marijuana a popular drug of abuse among teens and young adults.

More than 28,500 emergency room visits in 2011 were linked to synthetic marijuana. Nearly 80 percent of those cases involved adolescents or young adults aged 12 to 29, most of whom were male. 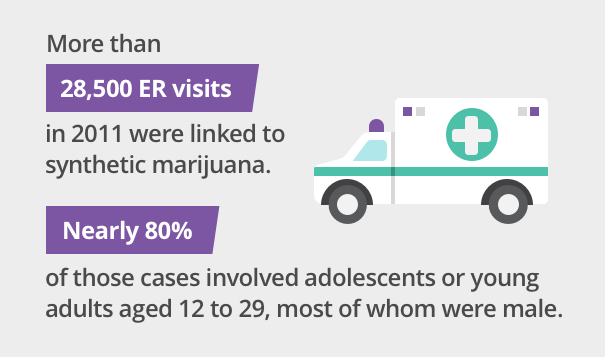 That said, research indicates that synthetic marijuana use among young people is declining. According to the 2017 Monitoring the Future survey, nearly 4 percent of high school seniors admitted to smoking Spice in the past year, down from about 11 percent in 2011.

Boys and young men tend to use synthetic marijuana more often than their female counterparts, according to a 2017 analysis in the journal Pediatrics. Frequent use of synthetic cannabis is more common among those who use other drugs, including LSD, cocaine, heroin and opioids, according to the report.

While Spice and K2 produce euphoric and relaxing effects similar to those of marijuana, synthetic marijuana is more powerful and unpredictable than pot.

Bad reactions to fake weed are common — and overdosing on the drug can trigger fits of psychosis and cause permanent organ damage.

Common effects of synthetic marijuana include:

Reports of overdose and death have occurred every year since Spice hit the market. It’s impossible to predict the effects of Spice because each batch is different and each person can have a different reaction. Even a single use can be fatal.

Long-term effects of Spice can include cardiovascular, psychiatric, and neurological problems that may be irreversible. Intense violent behavior occasionally results from smoking Spice. Multiple suicides have been attributed to the drug.

Little research exists about the side effects of synthetic cannabinoids or treatment options for people addicted to them.

A 2013 study published in the Journal of Addiction Medicine reported two cases of suspected withdrawal syndrome related to the long-term use of synthetic cannabinoids. Although the researchers described a lack of suitable treatment options for withdrawal symptoms, they cited therapy with benzodiazepines as a reasonable and efficient first-line approach.

And a 2016 study published in the journal Current Psychiatry Reports found that benzodiazepines and the antipsychotic drug quetiapine quelled some of the withdrawal symptoms of synthetic cannabinoids. However, the author stressed a need for more research into effective treatment options for addiction given the increasing popularity of the drug.