Spice is a brand of synthetic marijuana that looks like real marijuana or potpourri packaged in colorful foil. Sold in convenience stores, this dangerous and addictive drug also comes in a liquid form for vaping.
AddictionDrugsSpice & K2What Spice Looks Like
Topics on this Page
Topics On this page
Author: Amy Keller, RN, BSN | Last Updated: 2/27/20 | 17 sources
Spice looks fairly harmless in its foil packages branded with superheroes, cartoon characters, smiley faces and other colorful images. The drug is cheap and easy to get from convenience stores and head shops, but Spice is far from safe. Also known as K2, the dried plant material is a form of synthetic marijuana that is far more powerful than marijuana. The effects of Spice can include severe vomiting, psychotic fits, heart attacks and strokes. Spice often resembles potpourri or herbal tobacco, and most people smoke it. Unlike real weed, synthetic marijuana is not sticky and does not contain buds. It’s typically finely cut and greenish-brown in color. 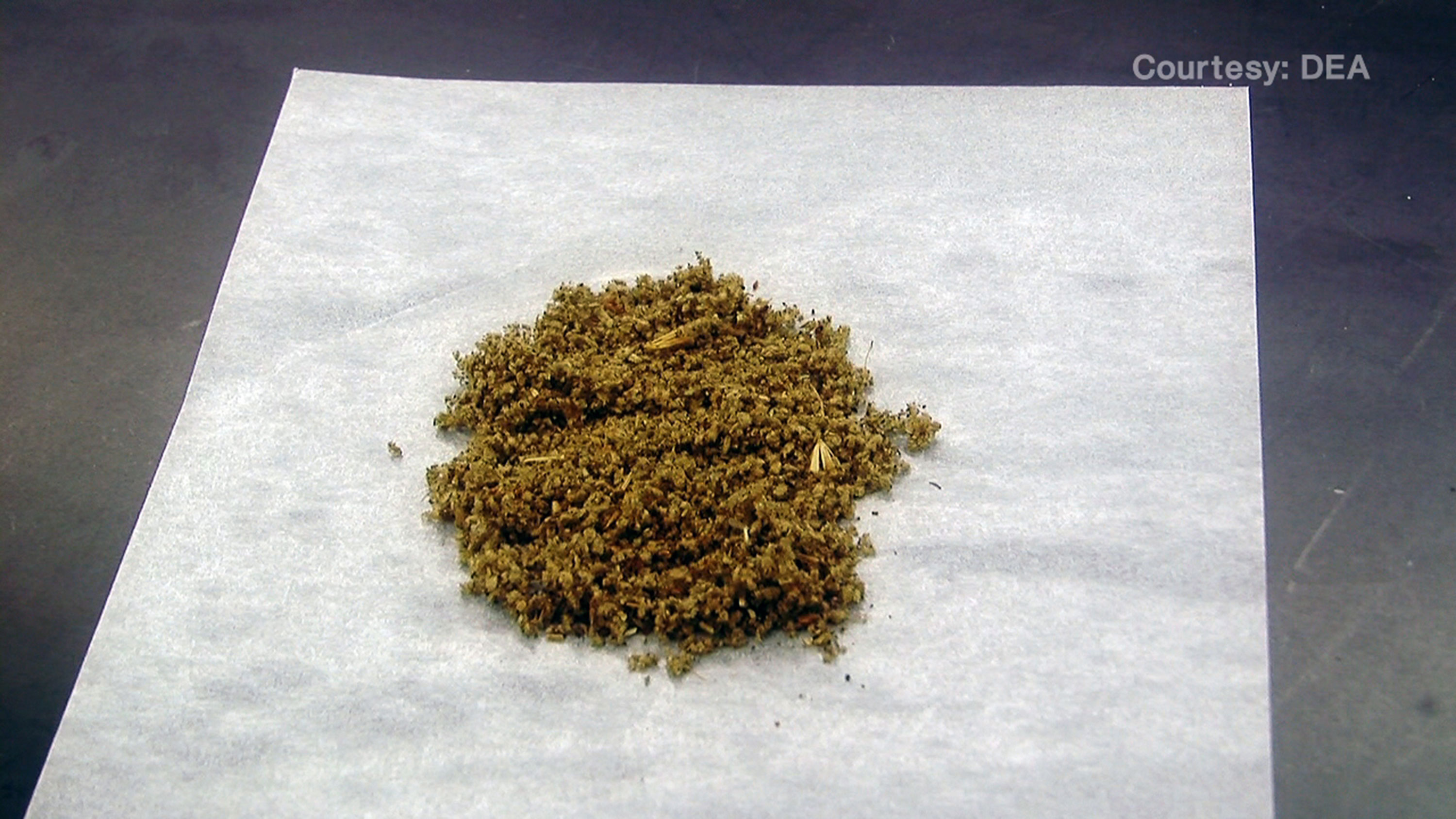 Synthetic marijuana is also sold in vials in a liquid form that can be vaped. The vials are sometimes erroneously labeled as CBD oil, a benign ingredient found in marijuana, when they actually contain dangerous synthetic cannabinoids. How Is Spice Different from Marijuana?

Synthetic marijuana is a concoction of manmade chemicals designed to mimic tetrahydrocannabinol (THC), the active ingredient in marijuana. The chemicals are sprayed onto dried plant material — such as tea leaves, dried herbs and grass clippings — that is sold in attractive packets. It’s impossible to know exactly what chemicals are actually in any given packet of Spice. That’s because the drugs are developed in clandestine labs in China and other countries and smuggled into the United States. Synthetic marijuana falls under a category of drugs called novel psychoactive substances (NPS). These drugs mimic the effects of other banned drugs, such as marijuana or cocaine, while not breaking any drug laws. Each time drug enforcement agencies catch on and begin to crack down on a specific NPS, the drugmakers tweak their recipes and roll out a slightly different formula. As a result, there is little to no uniformity in drugs like Spice and K2. The same brand of synthetic marijuana can contain completely different chemicals or more potent levels of the same chemicals. In addition, batches of fake weed are sometimes tainted with toxic contaminants, such as cocaine, sleeping pills and even rat poison.

The packaging that Spice, K2 and other types of fake weed come in is intentionally misleading. Packets are often labeled as herbal incense, even though they contain illicit drugs. It’s also common on packaging to say “not for human consumption” and “not meant to burned, smoked or incinerated.” In reality, that’s exactly what people do with the drug.
WARNING: The Truth About Spice
Packages of fake weed often claim that the product is legal — it isn’t — and contain warning labels stating that the product should be kept out of the reach of children. But with their bright colors and youth-targeted designs, synthetic marijuana packages are clearly intended to catch the eye of adolescents and preadolescents. 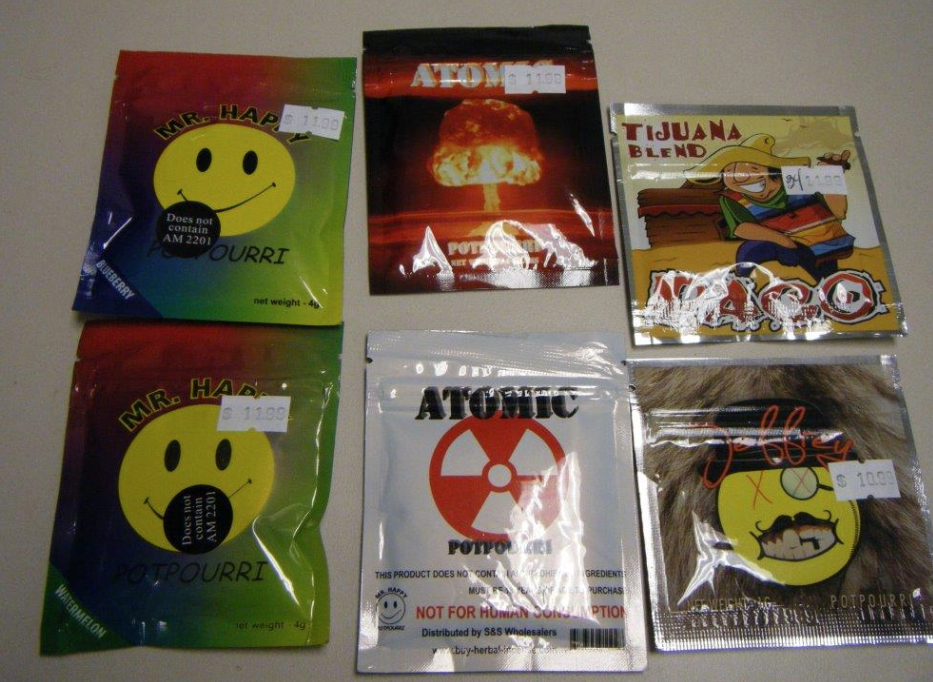 Recognizing Spice Use and Addiction

If someone is using Spice, you may notice a distinctive and unpleasant odor. Synthetic marijuana doesn’t smell like cigarettes or weed. It has a stale, pungent and sometimes fishy scent that tends to cling to clothing. Behavior is the biggest tip-off that a person is using spice. People who use synthetic marijuana may become extremely anxious, paranoid and violent. The drug can also trigger severe vomiting, suicidal thoughts and actions and episodes of acute psychosis. Spice addiction is common, and a person can quickly spiral into a vicious cycle of round-the-clock use of the drug. In the documentary The Last High, people who’ve used the drug describe horrible first-time experiences. But despite their harsh reactions, they used the drug over and over again. Blayke, a former Kush dealer from Baytown, Texas, who appears in the film, compares the drug to cigarettes. “Once you take that first hit and realize what it does to you, like physically and mentally, it’s completely a different ballgame. Even just the smell of opening up a fresh bag was like an aphrodisiac.” A person who is physically dependent on Spice may suffer from headaches, depression, anxiety and other withdrawal symptoms if they suddenly stop using the drug. Medical detox can relieve some of these symptoms, and rehab can provide the tools to manage cravings brought on by withdrawal from Spice and other synthetic marijuana products.
Medical Disclaimer: DrugRehab.com aims to improve the quality of life for people struggling with a substance use or mental health disorder with fact-based content about the nature of behavioral health conditions, treatment options and their related outcomes. We publish material that is researched, cited, edited and reviewed by licensed medical professionals. The information we provide is not intended to be a substitute for professional medical advice, diagnosis or treatment. It should not be used in place of the advice of your physician or other qualified healthcare provider.