People who use synthetic marijuana, commonly known as Spice and K2, can become seriously ill. The drug can cause agitation, confusion and psychotic fits. People have died from stroke, heart attack and kidney failure after using synthetic marijuana.
AddictionDrugsSpice & K2Effects
Topics on this Page
Topics On this page
Author: Amy Keller, RN, BSN | Last Updated: 2/27/20 | 18 sources

Synthetic cannabinoids, such as Spice and K2, are mind-altering chemicals designed to mimic THC, the active ingredient in marijuana.

Some people mistakenly believe that Spice and K2 are safe substitutes for marijuana — but the chemicals in synthetic weed are significantly more potent than THC and can cause dangerous and unpredictable side effects.

Over the past decade, tens of thousands of young people who’ve used synthetic marijuana have landed in emergency rooms with severe symptoms, such as vomiting, agitation, hallucinations and seizures.

Because synthetic marijuana acts on the same brain receptors as THC, it can produce a high similar to the stoned feeling that marijuana produces, but the effects are much stronger. Spice and K2 can distort perception and awareness of your surroundings. Some people experience psychotic episodes.

Psychotic effects associated with Spice and K2 include:

Synthetic marijuana can also cause severe physical effects, including:

Because all forms of synthetic marijuana are not identical, the drug’s effects are unpredictable.

In fact, hundreds of different chemicals are produced and sold as synthetic marijuana, according to the Centers for Disease Control and Prevention. No quality control is performed in the manufacturing process to ensure the products are safe.

Two packets of synthetic marijuana labeled with the same brand, for instance, may vary considerably in strength or contain a completely different chemical concoction. Synthetic pot may also be contaminated with other dangerous substances, such as bath salts, cocaine, sleeping pills or pesticides.

The duration of the drug’s effects is unpredictable. According to a 2013 review of research on synthetic marijuana published in the journal Psychopharmacology, symptoms can begin within minutes or hours of smoking K2 and may last for several hours. In one case report, a person experienced agitated delirium for days.

If you or someone you know becomes ill after using synthetic marijuana, seek help. Call 911 immediately or head to the closest emergency room.

Thousands of cases of synthetic marijuana overdoses are reported to poison control centers each year. Overdoses tend to occur in episodic outbreaks when a particularly toxic batch of the drug hits the streets or stores.

Over a three-day period in 2017, for instance, more than 100 people overdosed on K2 in Lancaster County, Pennsylvania, according to CNN. The patients ranged in age from mid-teens to early 30s, and some individuals overdosed several times. 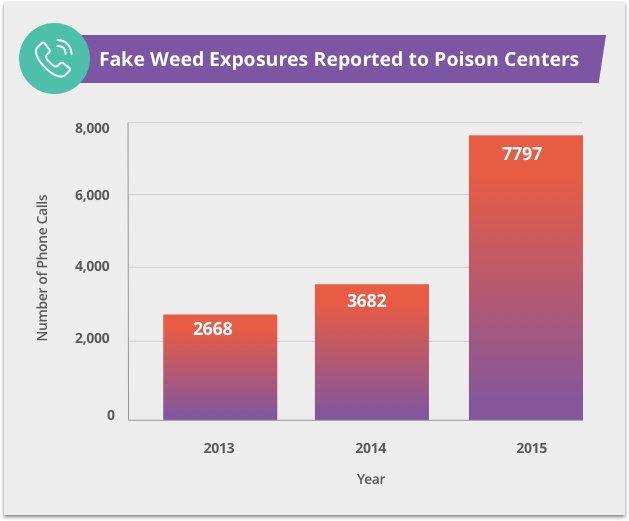 Signs and symptoms of synthetic marijuana poisoning may include:

A Spice or K2 overdose can lead to muscle breakdown, kidney failure, heart attack, stroke and death. Unfortunately, there is no antidote for a synthetic marijuana overdose. K2 poisonings are typically treated with supportive care in a hospital setting.

Individuals with a history of drug use or previous mental illness have an increased risk of experiencing a severe reaction to synthetic marijuana, according to the CDC.

The long-term effects of synthetic marijuana are still being studied, but some people who overdose on the drug never completely recover.

Emily Bauer nearly lost her life after using synthetic marijuana she purchased at a Texas gas station in 2012. After two weeks of using the drug daily, the 16-year-old developed severe migraine headaches.

But when she began slurring her words and behaving strangely, she was rushed to a local hospital. Her condition grew worse, and she was eventually placed on life support.

Bauer narrowly escaped death, but the young woman suffered multiple strokes that left her partially blind, paralyzed and unable to read or write.

Synthetic marijuana is addictive, and people who regularly use the drug often have trouble quitting.

Those who stop smoking synthetic marijuana abruptly may experience uncomfortable withdrawal symptoms, including:

People who use synthetic marijuana daily can experience withdrawal symptoms as soon as 15 minutes after last using the drug, according to a 2016 review published in Current Psychiatry Reports. Most withdrawal symptoms last about a week, but they can continue longer.

While no proven treatment regimen exists for synthetic cannabinoid withdrawal, benzodiazepine sedatives and antipsychotic medications such as quetiapine can sometimes ease symptoms.

Doctors may also provide anti-seizure and nausea medications, but more research is needed to determine the most effective treatment strategies for Spice addiction and withdrawal.