Man Walks US to Raise Addiction Awareness in Sister’s Honor

Atlanta native Brett Bramble is currently walking across the United States to raise drug abuse awareness in honor of his sister Brittany, who died of a drug overdose in 2014.

Bramble is following the American Discovery Trail, a coast-to-coast collection of roads and trails usually traveled by cyclists. He began his journey in Delaware March 15 — the two-year anniversary of his sister’s passing — and plans to finish in San Francisco. He has made it all the way to Kansas, about halfway through his route.

Bramble and his younger sister Brittany were a year and a half apart in age and very close.

“We were one grade apart, but people still thought we were twins so I used to just tell people she failed,” Bramble told DrugRehab.com.

Brittany’s story is similar to many others who lost their lives to addiction. Despite an upbringing with support and a stable home, she started using drugs during her youth.

“Even though we came from a loving family and we were well in the middle-class range, drugs came about,” said Bramble.

Brittany married and divorced in her 20s, which is when her drug use greatly increased, according to Bramble. He and his family tried to find help for Brittany, but they had no experience handling a loved one’s substance use disorder.

“We were trying to learn and to get her into rehab,” said Bramble. “She wanted to stop and to get better, but [the addiction] was just too fast.”

Brittany, a mother of three, began using heroin during this time. On March 15, 2014, Brittany died from a heroin overdose. She was 28 years old.

Following Brittany’s death, Bramble became an advocate to bring awareness to the drug addiction epidemic in the United States. He began attending events and fundraising to combat drug abuse, even rappelling down the side of a building to raise awareness.

For Bramble, advocating and helping others affected by drug abuse became a way to cope with the loss of his sister.

Get help with your addiction today!

Around the anniversary of Brittany’s death, Bramble began thinking about walking across the country. The idea came to him late one night while he could not sleep, but he did not take it too seriously. The thought of walking the country stayed in his mind over the next couple of weeks before he had an epiphany.

“Out of nowhere it just hit me,” said Bramble. “I was sitting on my couch, and it hit me like ‘oh my gosh, you need to do this for Brittany.’ Right then, I knew I was going to do it.”

In addition to planning his trip route, Bramble began researching the severity of the addiction epidemic in the United States in hopes of bringing a little bit of awareness to his cause.

Since starting his trek, Bramble has done more than 50 interviews with local and national news outlets, well exceeding any expectations he had about raising awareness.

Life on the Road

Equipped with minimal supplies, Bramble continues to make his way toward San Francisco.

“I’m pushing a stroller that I named Lieutenant Dan,” Bramble said. “It’s got a tent, sleeping bag, little things to be comfortable to sleep. And then I have my food, first aid kit, little random junk. Not much.” 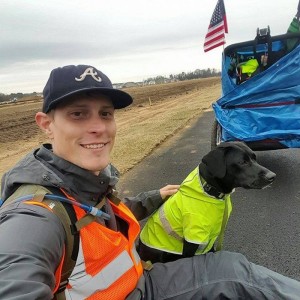 He said the outpouring of support and generosity he has received during his journey has been astounding. Families of those who have lost their children to drug addiction have traveled as far as two hours to give Bramble presents, buy him hotel rooms and pizza and to offer support. Strangers have even welcomed him into their home to spend the night, a nice break from the $20 Wal-Mart tent he usually sleeps in on the side of the road.

Everywhere he goes and with every person he meets, Bramble tries to spread his message to bring more attention to drug addiction. He says that drug abuse has affected almost every person he has met in his travels, an indicator of how widespread the problem really is.

“Unfortunately, nine times out of 10 they’re affected by the same cause,” said Bramble. “Somehow, someway, they know someone who either died from drugs or is currently addicted.”

The End of the Road

Bramble hopes to be greeted by a large group of family and friends at the end of his cross-country walk. He says he is definitely not walking back home to Atlanta after the trip.

Once Bramble reaches San Francisco, he plans to continue to raise awareness about drug addiction and possibly write a book about his journey.

“Everywhere I go, somebody says this is the worst area in America [for drug abuse],” he said. “The walk is over, but the cause won’t be.”