Virtual reality is one of the newest types of treatment being used to help individuals with disorders such as post-traumatic stress disorder (PTSD) or drug addiction. However, use of the treatment has sparked controversy among treatment experts.

Researchers in favor of using virtual reality (VR) for treatment say that it offers patients a simulated experience that helps them face situations that may be traumatic or that promote substance abuse in a controlled and supervised environment.

Critics of VR treatment say that it is a risky technique that tricks the brain into believing an inaccurate reality or that it is only a temporary cure.

Some researchers also question the effects of VR treatment and worry that VR’s realistic nature could make symptoms of PTSD or substance use disorders more severe for certain individuals. Mayank Mehta, a neurophysicist from the University of California Los Angeles’ Center for Neurophysics, questions whether VR treatment can trigger negative responses from individuals receiving it.

“The question seems to be, if VR is so real it can be used for treatment, then can it also create experiences that are traumatic?”

Other experts say more research about VR treatment needs to be done before incorporating it into treatment programs. Jeremy Bailenson, founder of the Stanford University Virtual Human Interaction Lab (VHIL), says there has simply not been enough research to make definitive assessments on how VR affects individuals.

“The truth is we don’t know what VR does to the brain yet, in part because the best brain studies require MRIs where the head needs to be still, and that’s not happening with VR,” Bailenson told USA Today.

Conversely, supporters of VR treatment are avid about its effectiveness and say it creates a realistic treatment approach to disorders that require specialized treatments. VR treatment exposes patients to simulated environments that trigger fear, anxiety and cravings in a safe and controlled space.

How Does Virtual Reality Treatment Work?

With the help of professional treatment personnel, VR treatment helps patients learn how to properly cope with situations that may lead to episodes associated with their specific disorder.

Bordnick’s lab builds realistic virtual situations that are meant to trigger cravings for nicotine, alcohol, weed and harder drugs for individuals suffering from addictions. One of Bordnick’s main objectives is to make sure that the lab’s VR treatment materials are as realistic as possible.

“We have to make it real. An alcohol dependent person knows their drink and what it looks like. If it’s not the right color, if it doesn’t look like a real whisky, that’s not going to make that situation applicable to them.”

One simulation exposes someone who has a marijuana addiction to a pizza party where individuals are smoking marijuana. The simulation incorporates multiple senses, including smell. Bordnick uses a specialized machine that omits odors specific to each VR situation. The VR pizza party uses a multitude of different smells.

“We have raw marijuana smell, marijuana smoke, incense, anything that’s associated with the drug,” Bordnick said. “If you go outdoors, we have sort of a pine, or outdoorsy, scent.” 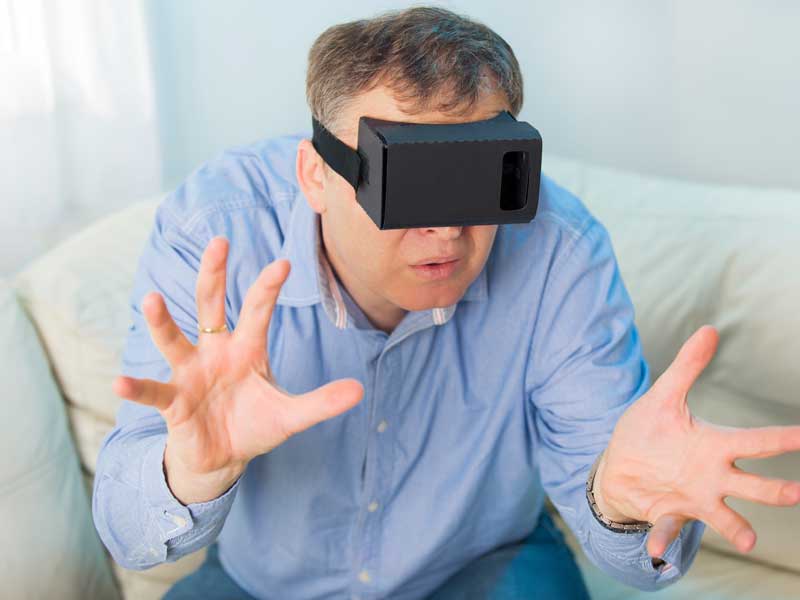 By stimulating as many senses as possible during VR treatment, an individual’s brain learns a new response to a situation that in the past may lead to relapse. The idea is to squash the brain’s link between certain situational stimuli and a substance-abuse response.

“If you’re exposed to stimuli without giving your body reinforcement (in the form of drugs), you kill the link, which in psychological terms is called extinction,” said Bordnick.

The same concept applies to treating individuals with PTSD. More and more veterans returning from Iraq and Afghanistan are receiving VR treatment as a way to cope with the disorder.

Skip Rizzo, a VR researcher at the University of Southern California, created the Virtual Iraq and Virtual Afghanistan VR software program. Rizzo’s software is being used at dozens of U.S. Department of Veterans Affairs facilities across the country and aims to help more veterans with PTSD. The Virtual Iraq and Virtual Afghanistan program allows veterans to see that the situations they faced while overseas cannot harm them now.

With VR treatment, veterans are able to face traumatic situations and learn how to cope with them properly.

“The point is to learn that the present can’t hurt you,” Rizzo told USA Today. “For anyone saying that we’re re-traumatizing people, we say this is better than having them see Middle Eastern garb at a Walmart and freaking out.”