Recover from drug addiction by finding treatment in the Empire State. New York is home to rehab facilities that treat a wide range of addictions and co-occurring disorders.

Why Choose Rehab in New York

The state of New York has the second highest number of drug rehab facilities in the United States. It was the first state to open a mental health facility dedicated to treating addiction in 1864. It’s also the home of the American Society of Addiction Medicine, a national leader in addiction medicine. For more than 100 years, New York has invested in mental health treatment and recovery resources.

How Do New York Facilities Rank?

More than 280,000 people were treated for substance use disorders in New York in 2015. The number of people treated for heroin addiction has increased each of the past three years, and the drug continues to be the most common reason New Yorkers enter rehab.

Comparatively, cocaine, marijuana and prescription opioid admissions have slightly declined during each of the last three years, but alcohol treatment admissions have remained stable. 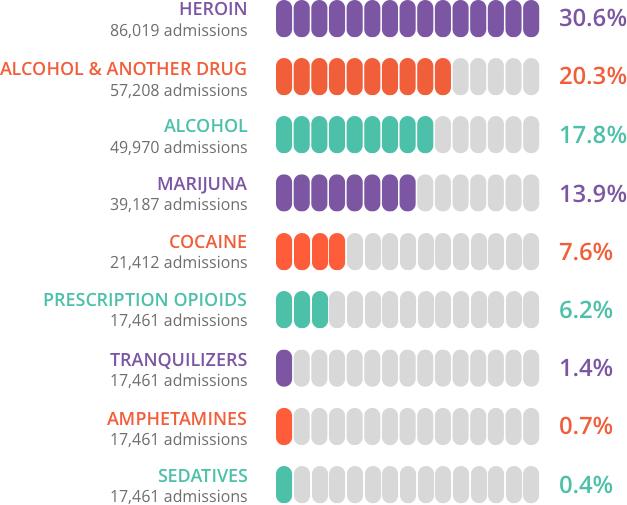 Heroin, prescription drugs, cocaine and marijuana were the top drug threats identified by law enforcement in New York in 2015.

Opioids, including heroin and prescription pain relievers, have contributed to growing numbers of drug overdose deaths during the last decade. The number of heroin deaths in 2014 was 25 times higher than in 2005, and the number of annual prescription opioid deaths quadrupled during the same time frame.

Prescription opioid deaths totaled 1,008 in 2014, and heroin deaths accounted for 825 deaths that year. Since 2006, the rate of heroin overdose deaths in New York has exceeded the national rate. Numerous counties have also reported increasing numbers of fentanyl-related deaths.

SUBSTANCE USE IN THE PAST MONTH 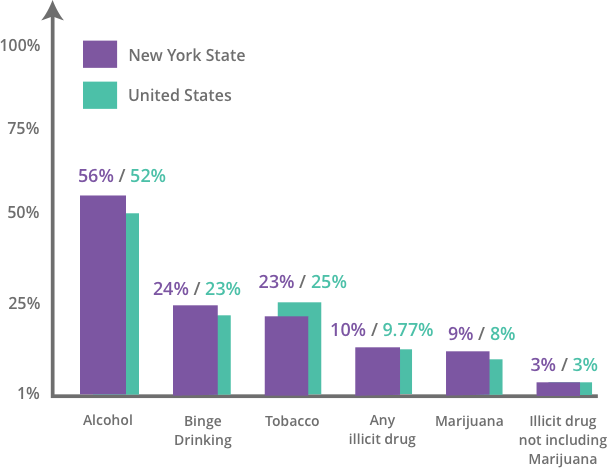 Source: National Survey on Drug Use and Health

SUBSTANCE USE IN THE PAST YEAR Source: National Survey on Drug Use and Health Similar to national trends, alcohol, tobacco and marijuana are the most common substances of abuse among New York high schoolers. About half of New York teens who report drinking alcohol say they binge drink. Electronic vaping products are also more popular among high schoolers than traditional tobacco products.

of New York high schoolers said they drank alcohol at least once in the past 30 days. Girls (32.4 percent) were more likely than boys (26.8 percent) to drink alcohol.

of high schoolers used an electronic vapor product in the past month.

percent of high schoolers said they used cigarettes, cigars or smokeless tobacco in the past 30 days. Boys (20.6 percent) were more likely than girls (12.2 percent) to use tobacco products.

of high schoolers said they drank more than five drinks on one occasion in the past month.

of high schoolers said they consumed marijuana at least once in the past 30 days.

of high schoolers reported trying cocaine at least once. Boys (9.2 percent) were more likely than girls (8.5 percent) to have tried cocaine.

of high schoolers said they had tried heroin at least once. Boys (6.5 percent) were more likely than girls (2.6 percent) to have tried heroin.

Top Cities to Rehab in New-york

Licensed rehab facilities can be found in cities across New York state. Find treatment facilities and support groups in a city near you.

New York has more prevention, treatment and recovery organizations than almost any other state. Most organizations operate on a local level, but several agencies and groups coordinate and support anti-drug activity across the state.

The Office of Alcohol and Substance Abuse Services operates 12 treatment facilities and supervises a system of more than 1,600 programs for people affected by addiction. OASAS supports community-based prevention coalitions, recovery groups and programs that promote well-being for all citizens on a state level.

Talk2Prevent is a program sponsored by OASAS that provides resources for parents to connect with their children, communicate about alcohol and drug use and learn how to establish consequences for breaking rules. It also distributes a toolkit for community members to build coalitions and implement evidence-based strategies.

New York’s Statewide College Consortia Steering Committee and OASAS work together to support college and university initiatives that raise awareness and reduce alcohol and tobacco use, gambling and violence in their communities. The NYS College Prevention Program provides training and professional development opportunities for college personnel to improve prevention outcomes.

The Council on Addictions of New York State comprises prevention, intervention and treatment organizations across the state. The groups partner to reduce alcohol, tobacco and other drug use and problematic gambling in the state. They also provide resources to families and friends of individuals affected by addiction.

The Alcoholism and Substance Abuse Providers of New York State represents alcohol and drug rehab facilities, prevention coalitions, recovery organizations, research institutions and other groups that support recovery. Its mission is to alleviate negative consequences associated with alcohol and drug use. NYASAP hosts annual conferences and summits where its members meet to discuss current issues.

Alcohol Awareness Programs are licensed agencies that educate and reform youth accused of alcohol-related offenses. Adolescents are referred to the programs by law enforcement, schools, family members or other organizations. The alternatives to incarceration teach youth the consequences of problematic alcohol use.

Youth Power! is a statewide nonprofit organization dedicated to reducing adolescent exposure to alcohol and other drugs. The group’s current ambitions include advocating for the criminalization of synthetic drugs, providing grants for youth development programs, training providers to communicate with youth and continuing public education campaigns.

Friends of Recovery is a statewide organization that includes New Yorkers in recovery and friends, families and community members who support people in recovery. It represents the interests of the recovery community, advocates for policies that support recovery and strives to increase access to treatment and resources for people affected by addiction.

You can find support group meetings, including Alcoholics Anonymous and Narcotics Anonymous meetings, in communities across the state of New York. Thousands of meetings are held every day for people seeking sobriety and recovery from addiction. 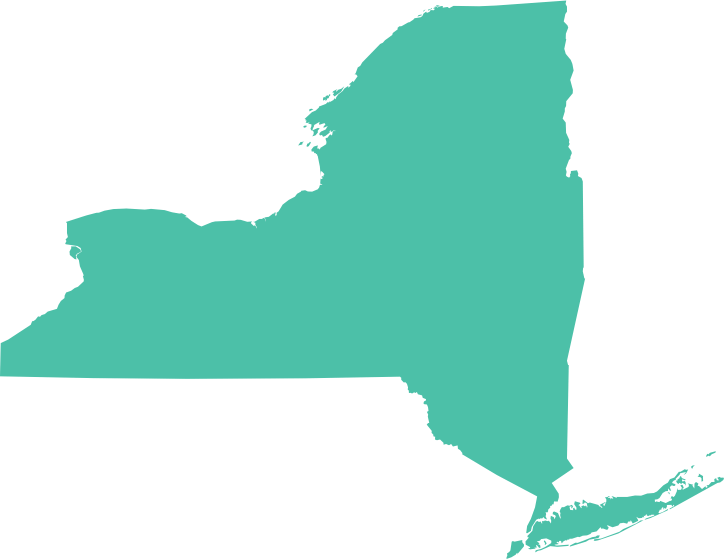