OCD is a mental disorder that can dictate a person’s everyday routine, keeping them from enjoying the pleasures and perks of life. Though it affects millions, just 10 percent with OCD have received treatment. Seeking aid for co-occurring disorders involving OCD and drugs or alcohol is an important step toward recovery.

Obsessive-compulsive disorder (OCD) is a mental anxiety disorder in which a person harbors intrusive, distressing and often irrational thoughts or engages in repetitive, compulsive behaviors that consume their lives.

OCD, considered by many experts to be a lifelong disorder, is split into two hallmark categories: obsessions and compulsions.

Obsessions are involuntary, uncontrollable and often disturbing thoughts, images or impulses that flood one’s mind. For example, a person with OCD may not be able to shake the thought of a loved one passing or his or her toddler wandering off into a crowd. A seemingly endless reel of their worst fears is played out for hours, sometimes all day.

Compulsions are more ritualistic, and individuals with OCD conduct these actions repeatedly. They might check to see whether the front door is locked or their stove is turned off dozens of times in a short period. Or they might frantically wash their hands until they’ve scrubbed them raw.

They feel compelled to continually perform these tasks, with painstaking attention to detail, as a short-term stress reliever, yet they are helpless to break free from these actions or thoughts.

To ease these anxieties, many turn to drugs or alcohol. In fact, studies indicate 25 percent of people who seek treatment for OCD also meet the criteria for a substance abuse disorder. Simply trying to self-medicate could give way to a full-fledged addiction.

Struggling with OCD and Addiction?Our recovery programs are designed to meet your individual needs. Get Help Now

One case study, published by the U.S. National Library of Medicine, found that 70 percent of 323 participants dealing with OCD and some form of substance abuse had the disorder first; the dependency came after the fact.

Studies suggest as many as 3 million adults may have OCD at any single time.

These substances, which serve as a temporary escape, only exacerbate problems. Once the tranquil effects wear off, the anxieties can come flooding back, sometimes stronger than before.

OCD, coupled with substance abuse, can interfere with your time at work, school and home. It can overtake your life, shattering your relationships and psyche in the process.

The term “OCD” is often used lightheartedly in casual conversations by those often not truly affected by the disorder. They may joke about “having OCD” as they avoid stepping on the cracks in a sidewalk or after straightening a slightly tilted frame adorning a wall. But for those who live with OCD, it is far from a laughing matter.

There are a wide range of symptoms related to OCD, the most common of which include:

Symptoms, or urges, vary in severity, though they can gradually increase or worsen over time or because of stress, illnesses or fatigue. And, often, these compulsions or obsessions are not the only problems.

Studies have shown that 75 percent of people with OCD grapple with multiple co-occurring disorders. In fact, OCD heightens their chances of developing other mental disorders — such as schizophrenia, Tourette syndrome and eating disorders, such as body dysmorphic disorder. Depression, too, has been closely associated with OCD.

75% of people with OCD grapple with multiple co-occuring disorders.

Many with OCD, especially adults, whether diagnosed or not, recognize something peculiar about their behavior. If symptoms persist, these individuals worry about going senile, generating even more stress, to the point where they begin isolating themselves from family and friends.

OCD has no known cause, but scientists have a number of theories. 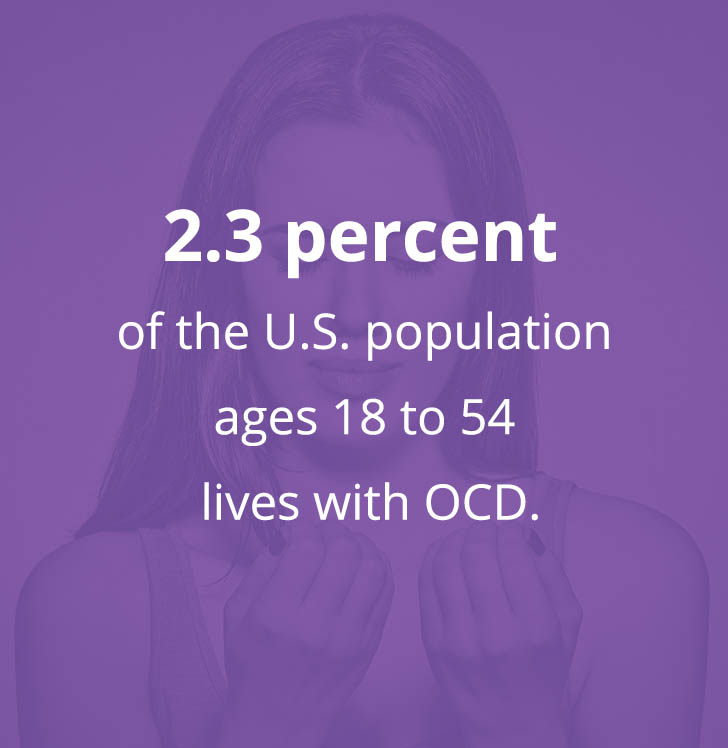 Researchers have hypothesized a genetic component to OCD, similar to that in addiction. In 2014, scientists even identified a genetic marker linked to OCD, a gene called protein tyrosine phosphokinase (PTPRD), according to John Hopkins Medicine. The gene has ties to animals, as it is involved in their learning and memory — traits influenced by OCD in humans.

Studies also have shown that those with first-degree relatives — a parent, sibling or child — with OCD are at higher risk for the disorder themselves. If the family member developed OCD as a child or teen, the risk increases.

Environmental factors and childhood trauma, as well as specific injuries to the head, infections and abnormal functions in certain areas of the brain, may also contribute to OCD. Research, however, remains ongoing.

OCD is not uncommon, affecting millions in the U.S. today. Celebrities such as Daniel Radcliffe, Cameron Diaz, Leonardo DiCaprio and Justin Timberlake all have reportedly lived with OCD.

According to Understanding Obsessive Compulsive Disorder, a website dedicated to providing information on the disorder, about 2.3 percent of the U.S. population ages 18 to 54 lives with OCD. That is a higher rate than disorders such as schizophrenia, bipolar disorder or panic disorder. 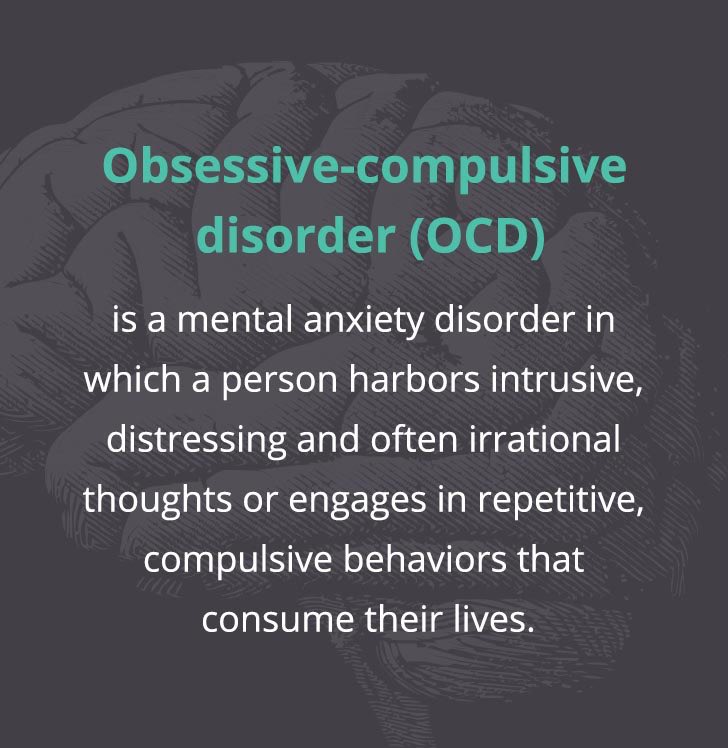 OCD does not discriminate in its victims. It is found to the same degree in men and women and in all ethnic groups. The age of onset is 6 to 15 for males and 20 to 29 for females, on average. The average age at which symptoms begin is 19. For many, OCD takes root during childhood, with one in 100 children estimated to have the disorder at a given time. Certain studies have found boys are more likely to develop the disorder than are girls.

Those who do experience OCD symptoms during childhood or adolescence are more likely to develop a drug or alcohol problem, according the Journal of Anxiety Disorders. Treating the disorder could save your child from years of anxiety.

OCD is a treatable disorder, especially if identified early. However, if left untreated, the disorder can last a lifetime.

Looking for Help?Our dual recovery programs are based on decades of research to deliver treatment that really works. Get Help Now

Psychotherapy is one avenue. Exposure and response prevention (ERP) has proved one of the more effective therapy options, according to studies; this does not involve avoiding a particular fear or obsession, but confronting it. Someone with a fear of germs, for instance, might be gradually exposed to dirt. It takes much effort and bravery but allows those with OCD to gain control over obsessive thoughts and compulsive behaviors. And it has proved reliable and effective for many.

Your doctor might prescribe a medication, specifically an antidepressant, such as Prozac or Zoloft, a mood stabilizer or an antipsychotic, to control symptoms. These are typically used in conjunction with cognitive behavioral therapy. When using medications, however, physicians tend to prescribe the lowest possible dosage. Medications might have dangerous consequences if mixed with other substances, such as alcohol. Those with OCD and an addiction should heed their physician’s advice.

Treating these co-occurring disorders of OCD and substance addiction can prove difficult but necessary. If one is treated and the other is not, the chance of relapse increases exponentially, according to the National Institute on Drug Abuse.

Treatment may not cure OCD, but it can alleviate symptoms, reduce stress and allow sufferers to live fuller lives.

OCD has clear differences from common, everyday stresses. Worrying about paying a particular bill or whether the dishes are washed does not necessarily constitute OCD, as those who live with this debilitating anxiety disorder can attest.

Those with OCD carry a heavy emotional burden. Many are ashamed of their anxieties and will do anything to reduce this stress, including using alcohol or other controlled substances. If you or someone you know has alarming obsessions or compulsions similar to the symptoms listed above, contact a physician or mental health provider.