Bipolar disorder interrupts regular life, making it difficult for those who suffer from it to maintain relationships and perform ordinary activities. People with bipolar disorder also suffer from substance use disorders at rates much higher than those for the general population. Substance abuse may provide a temporary relief of symptoms, but it can also increase the length, severity and frequency of symptoms. Treatment for co-occurring disorders helps patients live happier lives.

Bipolar disorder usually occurs near the end of adolescence and the early part of adulthood, with about 50 percent of diagnoses occurring before age 25. Bipolar disorder is a lifelong disease for most people, but medical treatment can ease symptoms and help patients maintain more stable moods.

Treatment is more difficult when a person is involved with substance abuse. People with bipolar disorder misuse substances such as drugs and alcohol at rates much higher than those of the general population. Some experts estimate that people with the disorder are up to seven times more likely to have a substance use disorder.

Health care professionals aren’t sure why people with bipolar disorder misuse drugs and alcohol at a high rate. Some people attempt to treat symptoms of their illness with the substances, but substance abuse can activate or prolong symptoms. Symptoms of bipolar disorder, such as difficulty controlling behavior, may contribute to someone abusing drugs or alcohol. 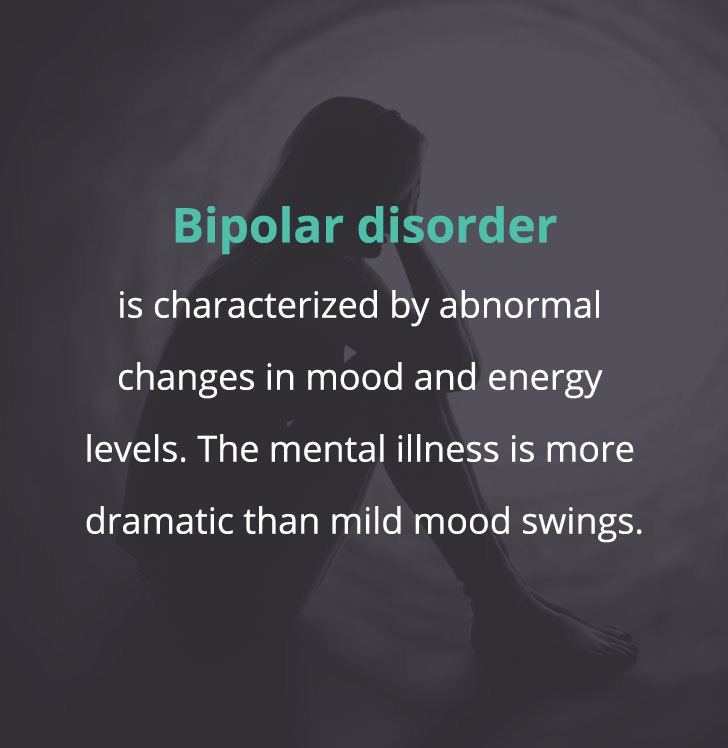 People with bipolar disorder also tend to suffer from other co-occurring illnesses, including attention-deficit hyperactivity disorder (ADHD) or anxiety disorders, such as social phobia or post-traumatic stress disorder (PTSD). Symptoms of the disorders may overlap, making diagnosis difficult.

It can be extremely difficult for people with bipolar disorder to live daily life without treatment. Substance abuse may provide a temporary fix for some, but it can cause prolonged or heightened symptoms and lead to addiction. Fortunately, some rehabilitation clinics specialize in treating patients with bipolar disorder and other co-occurring illnesses.

Struggling with Bipolar Disorder and Addiction?

Our recovery programs are designed to meet your individual needs.

Symptoms of manic episodes include:

Symptoms of depressive episodes include:

People in a mixed state feel a combination of symptoms. They may feel energized and sad or feel agitated while having suicidal thoughts.

Types of bipolar disorder include:

The reasons some people suffer bipolar I and others suffer bipolar II isn’t clear. Health professionals are still trying to understand the causes of all types of bipolar disorder.

Most experts believe bipolar disorder can be caused by multiple factors that act together to increase the risk of the illness. Like many mental illnesses, bipolar disorder seems to run in families. There’s evidence that certain genes make someone more susceptible to the illness, but people with siblings or parents with bipolar disorder may never develop it.

Researchers studied twins with the same genes and found that one twin may develop bipolar disorder while the other one doesn’t. The results lead experts to believe environmental factors may play a large role in a person’s likelihood of experiencing the illness.

Treating someone with bipolar disorder and a substance use disorder can be difficult when health professionals are unaware of the co-occurring disorders or are inadequately equipped to treat them.

Nanci Stockwell of Advanced Recovery Systems discusses how mental health professionals treat co-occurring disorders. She explains why it’s important for someone with bipolar disorder and a co-occurring substance use disorder to receive integrated treatment.

Substance abuse makes symptoms of bipolar disorder worse and decreases the benefits of standard treatment. People tend to take longer to recover, spend more time in health facilities and be more likely to contemplate suicide when they misuse substances during treatment. Individuals with co-occurring disorders can find the best care at rehabilitation facilities specifically equipped for treating both illnesses.

Our dual recovery programs are based on decades of research to deliver treatment that really works.

Treatment for substance abuse typically begins with a detoxification process, which may include medication depending on the substance of abuse and severity of withdrawal symptoms. Health professionals do their best to treat withdrawal symptoms to keep patients as comfortable as possible.

Doctors can not cure bipolar disorder, but treatment can reduce the severity and frequency of symptoms. Long-term treatment is required to control symptoms throughout life.

Treatment for bipolar disorder normally begins with medication, but medication may not be appropriate for everyone. Patients should discuss the benefits and risks with their doctors before taking a medication.

Medications for bipolar disorder include:

Lithium:
Available in brand names Eskalith and Lithobid, lithium effectively stabilizes moods during both manic and depressive episodes.
Anticonvulsants:
Anti-seizure drugs like Depakote (valproic acid) and Lamictal (lamotrigine) can manage symptoms of bipolar disorder.
Atypical antipsychotics:
When taken in combination with other drugs, atypical antipsychotics, such as Risperdal (risperidone) and Seroquel (quetiapine), can treat bipolar disorder.
Antidepressants:
Antidepressants may treat depressive episodes, but they are often taken in combination with other drugs to prevent a manic episode from developing.

Treatment with medications works best when used alongside behavioral therapy. Therapy is also used to treat most substance use disorders, so individualized treatment plans can help patients recover from co-occurring disorders simultaneously.

Types of behavioral treatments include:

When health professionals develop co-occurring disorder treatment plans specific to an individual, patients see improvements in the way they enjoy life. Patients do recover from substance use disorders, but treatment takes time and hard work. Bipolar disorder cannot be cured, but patients can learn to minimize and manage their symptoms.

Without treatment, symptoms of bipolar disorder can deteriorate. The severity, length and frequency of manic and depressive episodes can worsen. Delays in diagnosis and receiving treatment can negatively affect regular life and relationships.

Facilities that specialize in treating bipolar disorder with co-occurring disorders can rehabilitate patients so they can enjoy life.