Inhalants contain poisonous chemicals capable of causing immediate death. Sudden sniffing death syndrome isn’t fully understood because it can cause death to occur within minutes. In some cases, the heart stops beating before the substance being inhaled leaves the person’s hand.

First responders rarely save the lives of people whose heart has stopped because of inhalant use.

Sudden sniffing death syndrome can be prevented only by avoiding inhalant abuse. Unlike many other drugs capable of causing overdose, no safe dose of an inhalant exists.

Most sudden sniffing death syndrome fatalities are caused by heart failure. The heart requires oxygen to beat properly, and inhalants deprive the body of oxygen. Without oxygen, the heart beats erratically and can stop functioning.

Any inhalant can cause sudden sniffing death syndrome, but the following chemicals are most likely to cause the condition:

Common ways of abusing these substances huffing, bagging and sniffing. All methods of using inhalants are dangerous.

Inhalants also make the heart more sensitive to chemicals, such as adrenaline, that increase heart rate. The body naturally releases these chemicals when a person is scared or caught off guard. Many people refer to this as the body’s fight-or-flight response. 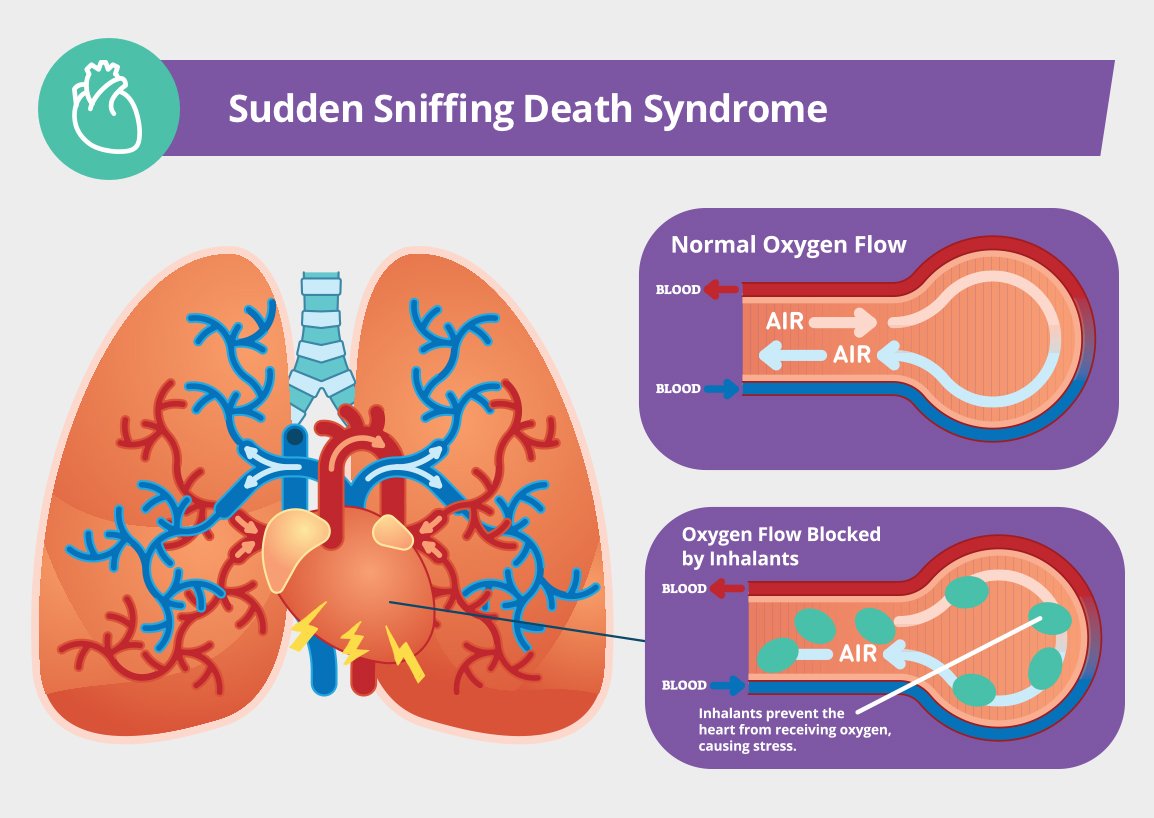 If someone is startled while using inhalants, the heart can be overwhelmed by these chemicals and stop beating, according to a 2003 review published in American Family Physician.

The only way to prevent sudden sniffing death syndrome is to avoid inhaling toxic substances. Individuals with a history of heart or breathing problems may be at an increased risk for the condition, but any healthy person can die suddenly from inhalant effects.

Bystanders should always call 911 if someone experiences side effects of inhalants, but most people die of sudden sniffing death syndrome before first responders arrive.

Health professionals can treat some symptoms of inhalant abuse, but they can’t reverse the drugs’ effects on the body. Unlike a heart attack, heart problems caused by inhalant abuse can’t be treated with medication. Resuscitation is unlikely, according to a 2009 article in the Journal of Emergency Medical Services.

Repeated inhalant use can lead to drug addiction. This increases the risk of life-threatening side effects because people who are addicted cannot control their inhalant use.

Few up-to-date statistics are available regarding sudden sniffing death syndrome. It’s unclear how many people die of the condition annually.

The National Survey on Drug Use and Health published in 2017 found that 24 million Americans reported abusing inhalants during their lifetime. An estimated 728,000 abused propane or butane — the substances most likely to cause sudden sniffing death syndrome. The survey doesn’t collect information on deaths or rates of adverse effects.

Inhalants are volatile substances capable of killing individuals instantly. Butane, propane and aerosol sprays are more likely to cause sudden sniffing death syndrome than other substances. But use of other inhalants, such as paint thinners or whippits, can also lead to death.