Commonly called dope sickness, heroin withdrawal symptoms are often compared to the flu. They’re rarely life-threatening, but many people would rather be addicted to heroin than face heroin withdrawal. Detoxing at a rehab center makes the withdrawal process less painful.
AddictionDrugsHeroinDetoxWithdrawal
Topics on this Page
Topics On this page
Author: Chris Elkins, MA | Last Updated: 2/27/20 | 7 sources

Withdrawal from heroin is one of the biggest obstacles to recovery from heroin addiction. People who are addicted to heroin often have no greater fear than dope sickness — the street name for heroin withdrawal. 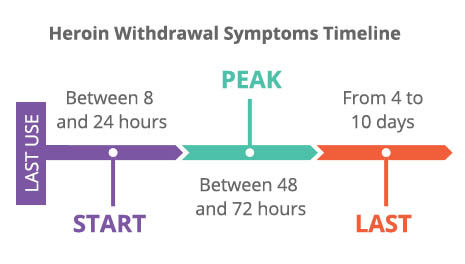 The symptoms can be so severe that individuals going through withdrawal become figuratively paralyzed. Being dope sick can confine a person to a bedroom or a bathroom for days.

Early symptoms of heroin withdrawal include:

Late withdrawal symptoms of heroin include:

The length and intensity of heroin withdrawal symptoms depend on several factors, including the way the drug is consumed and the duration, frequency and amount used.

Overcoming heroin withdrawal symptoms without professional help is difficult, and most people who try to quit on their own end up turning to heroin when withdrawal becomes too difficult. More comfortable and reliable ways to quit heroin are available if you decide to seek help.

Withdrawal from heroin can occur after a few uses. The hangover from first-time heroin use can be so intense that people decide to seek the drug to relieve their symptoms. While people generally don’t become addicted the first time they try heroin, the first try can trigger a dangerous pattern of use.

Most people become addicted to heroin over several days or weeks. Heroin affects parts of the brain that control pleasure and motivation. Repeated use causes changes in the body that make the brain rely on heroin to feel normal. This is called dependence, and it’s one reason why heroin is so addictive.

Heroin dependence occurs because opioids such as heroin are chemically similar to opiates that the brain produces naturally to control how we feel pain and pleasure. The difference between opioids and opiates is that opioids are man-made and opiates occur naturally.

The brain decreases the natural production of opiates when it’s exposed to heroin and other opioids. It starts to depend on heroin to feel normal. When a person who is dependent on heroin stops using the drug, the brain doesn’t have enough man-made or natural opioids to feel normal. As a result, it goes into withdrawal.

The time that it takes to experience withdrawal depends on how long it takes for the brain to restore natural opiate production.

Different types of heroin, such as black tar heroin or white powder heroin, may affect withdrawal length depending on the purity of the substances. Speedballing — mixing heroin with cocaine — or using heroin with other types of drugs may also complicate the withdrawal process.

The stages of heroin withdrawal can be divided into three categories:

Early symptoms
The early symptoms of heroin withdrawal usually begin within 12 hours of last use. Some people may experience initial symptoms within eight hours, and others may not feel them for up to 24 hours. Symptoms usually begin with sweating, muscle aches and irritability.
Peak symptoms
Early symptoms slowly worsen for two to three days. The person usually has trouble sleeping during the first few days of heroin withdrawal. During the peak period, late symptoms of withdrawal such as cramping, diarrhea and vomiting begin.
Late symptoms
After the peak stage of withdrawal, early symptoms start to subside. People still feel late symptoms, but they slowly lessen in severity. Sleep problems tend to improve, but most people struggle to get a full night of rest during any stage of withdrawal. Late symptoms usually last for between four and seven days.

It’s not possible to get through heroin withdrawal more quickly. The duration depends on the severity of your addiction. However, you can make heroin withdrawal less painful by going to a quality detox or treatment facility.

Our recovery programs are designed for you.

But health professionals don’t recommend overcoming heroin addiction and withdrawal on your own because the chances of success are so low. The symptoms are so painful that few people are capable of powering through opioid withdrawal.

How to Cope with Heroin Withdrawal Symptoms at Home

If you choose to try to quit heroin at home, try to make yourself as comfortable as possible. Ask for several days off work and make sure you have plenty of fluids, healthy food and hygiene necessities, such as toilet paper.

Consider contacting a rehab facility ahead of time in case you’re unable to get through withdrawal on your own.

Ask a trusted friend or family member to stay with you in case you experience a complication involving another health condition. A loved one may also be able to encourage you to get through withdrawal and avoid seeking heroin to alleviate your symptoms.

Create a list of nearby support group meetings you can attend to help you avoid relapse after you overcome withdrawal. You may want to consider contacting an addiction therapist or rehab facility ahead of time in case you’re unable to get through withdrawal on your own. This way, if you find you need help, you can attend rehab instead of returning to regular heroin use.

Detoxing from Heroin at Rehab

Overcoming heroin withdrawal at a detox or rehab facility is much easier than detoxing at home. During heroin detox, you’ll receive around-the-clock medical supervision. Nurses will monitor your vital signs to ensure your safety.

You’ll receive adequate nutrition and fluids that may ease some symptoms associated with heroin withdrawal. You may also receive some medications to treat symptoms such as pain, nausea or diarrhea.

When you’re assessed at a heroin treatment facility, you can learn about medication-assisted treatments that may relieve symptoms of heroin withdrawal. Medications such as methadone or Suboxone may be recommended to help you taper off of heroin. These medications are proven to decrease relapse rates when they’re combined with other types of therapy for opioid addiction, according to the Substance Abuse and Mental Health Services Administration.

Heroin withdrawal symptoms are among the most painful withdrawal symptoms caused by drug addiction. But they aren’t insurmountable, and people going through withdrawal don’t have to try to power through the symptoms on their own. Help is available to ease the recovery process and prevent relapse.